(Minghui.org) Falun Dafa practitioners gathered at the Guro District Park for a rally on Sunday, August 28, 2022, to celebrate the 400 million Chinese who have withdrawn from the Chinese Communist Party (CCP) and its affiliated organizations. The hot summer was over and a cool, refreshing autumn day made the event all the more memorable. 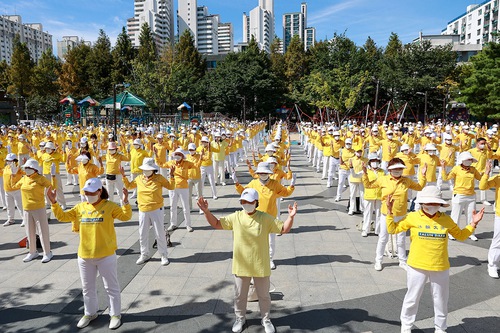 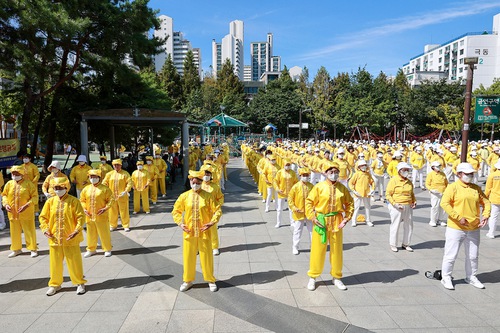 Dafa practitioners gathered for group exercises before activities were held to celebrate 400 million Chinese who have quit the CCP and its affiliated organizations.

The practitioners marched from Namguro Market to Daerim Jungang Market, around 3 km (over 1.8 miles). Namguro Market is Korea’s largest Chinese market, while Daerim Jungang Market is in an area with the largest Chinese population. Chinese living in other areas often visit these two markets to shop and the area is also a gathering place where people catch up with friends and family. With the Mid-Autumn Festival just around the corner, many Chinese came to shop and the markets were crowded. 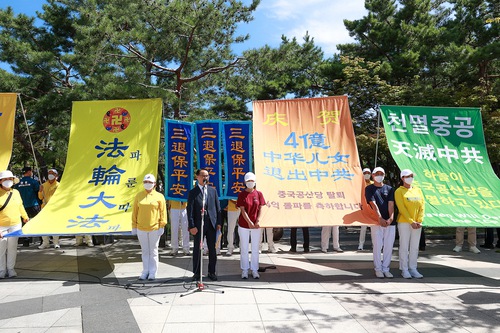 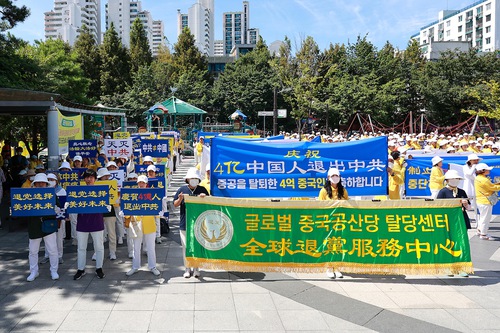 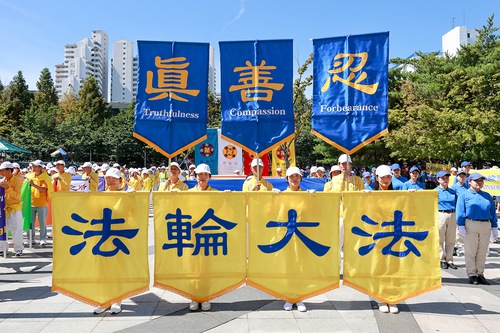 A rally was held at Guro District Park on August 28, 2022, to mark 400 million withdrawals from the CCP.

The Wave of Withdrawals Is a Spiritual Awakening for China 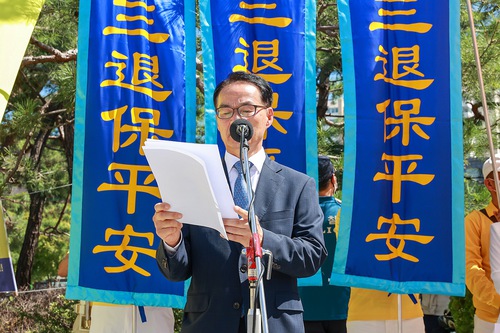 Mr. Wu Shilie, Chief of Affairs of the Korean Falun Dafa Association, read a statement at the rally.

The rally and parade were organized by the Korean Falun Dafa Association. In a prepared statement, the association announced, “We sincerely congratulate the over 400 million people who chose to renounce their membership in the CCP and its affiliated associations. This heralds the fall of the CCP and is an important event. The tide bringing the downfall of the CCP is unstoppable and is an inevitable trend. We hope that all Chinese citizens can join this trend of quitting the CCP.” 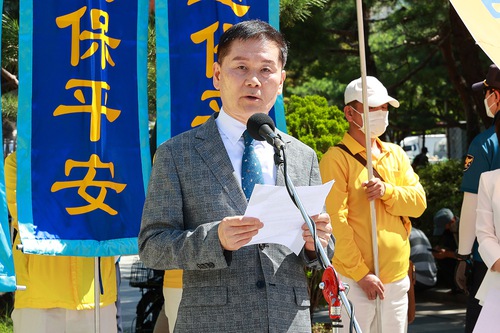 Mr. Pu Junhuan, president of the Korean branch of the Global Quit the CCP Center spoke at the rally.

Mr. Pu Junhuan, president of the Korean branch of the Global Quit the CCP Center praised those who have quit the CCP, saying, “It is a joyful thing that you have courageously abandoned the CCP. Quitting the CCP can disintegrate the regime peacefully from within China. This is an unprecedented movement, a spiritual awakening, and will be recorded in history. The CCP cannot represent China and its 5,000 years of history. Withdrawing from the Party is not getting involved in politics. On the contrary, it is distancing oneself from the CCP’s politics and regaining one’s freedom and rights.” 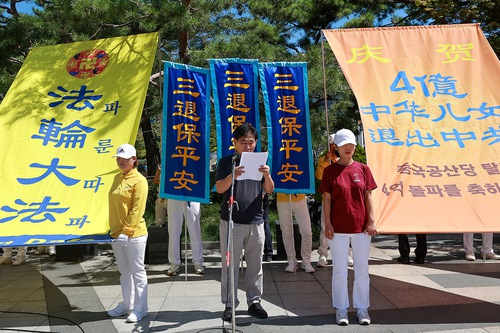 Mr. Han Yingfu, committee member of the China Strategy Research Center, was invited to speak at the rally.

Mr. Han Yingfu, committee member of the China Strategy Research Center, who was invited to speak at the rally, said, “The CCP’s 100 years of history is one of a bloody massacre. Four hundred million people have quit the Party because they experienced the evil Communist ideology. China’s 5,000 years of glorious culture vanished without a trace after decades of Communist rule. Chinese people have lost their true history and culture. They can only remember history fabricated by the CCP and are the most unfortunate group of people.” 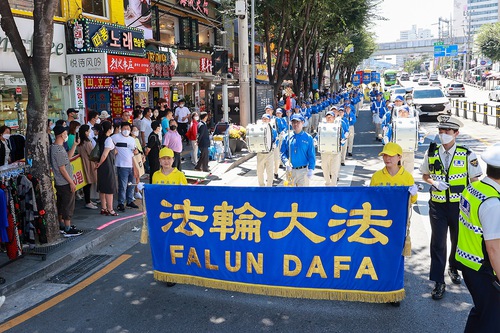 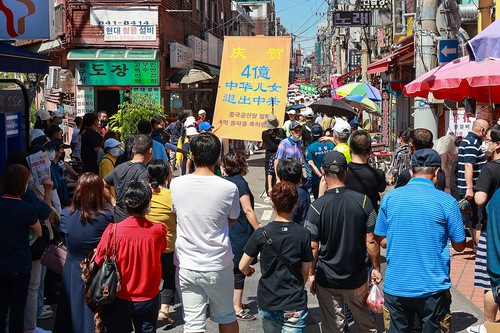 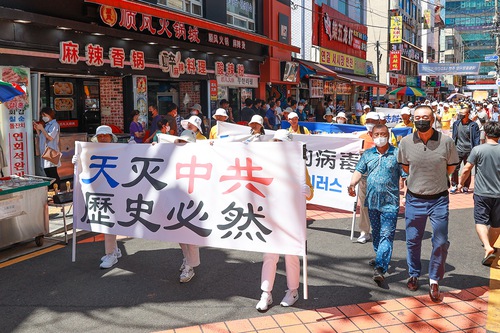 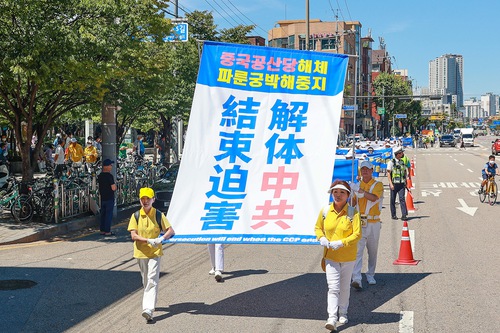 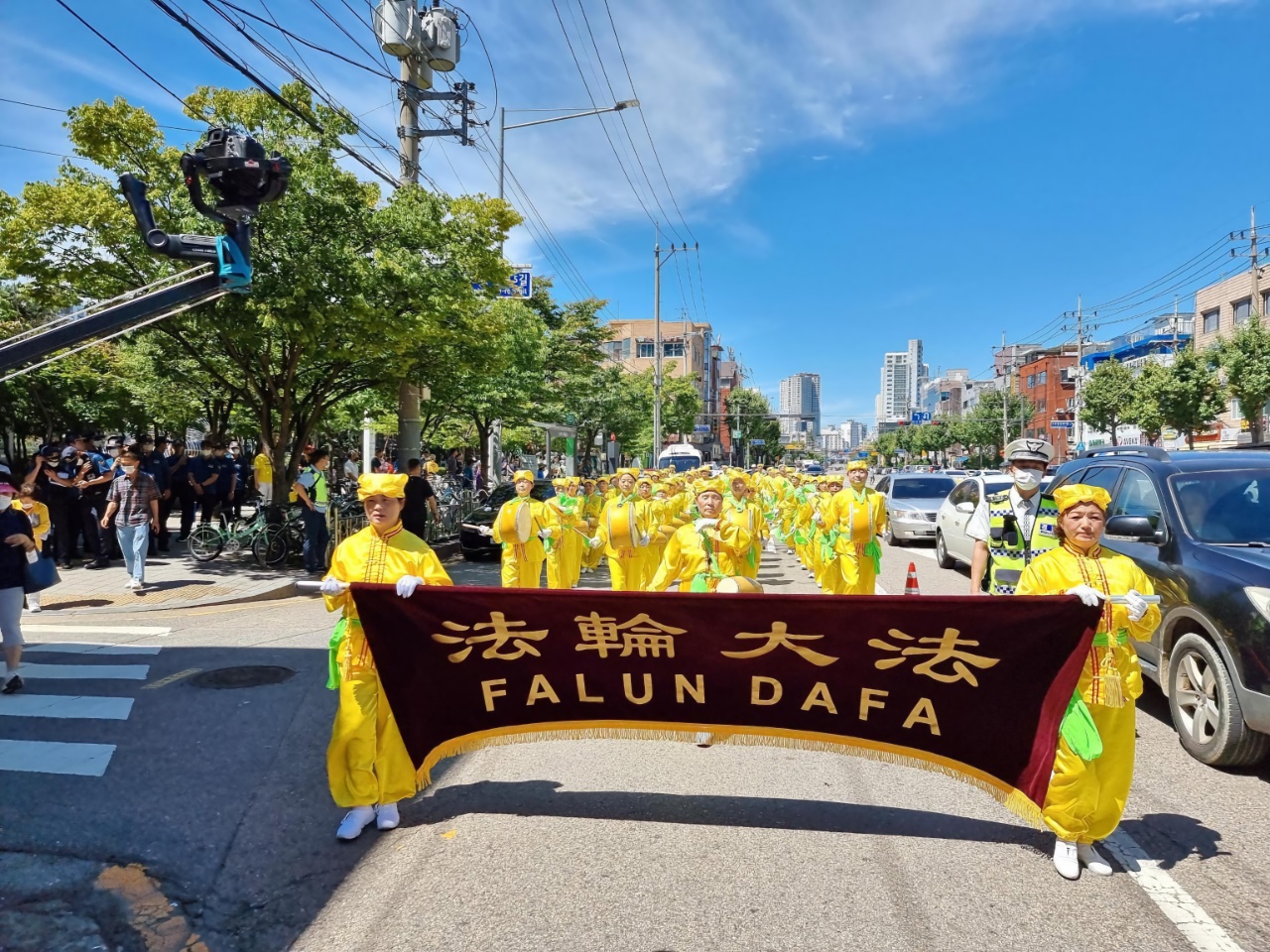 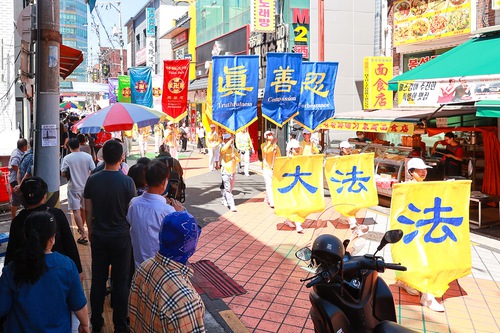 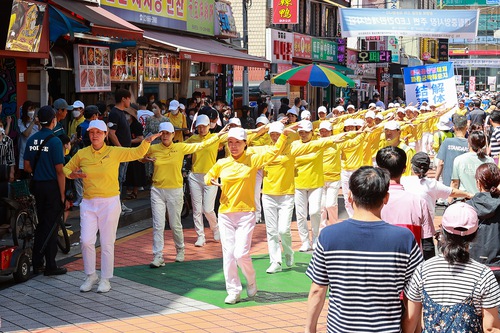 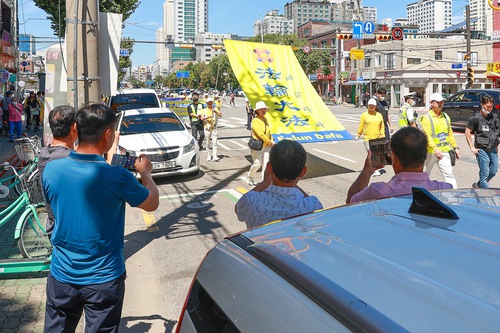 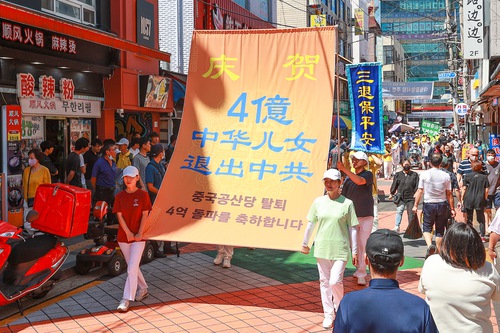 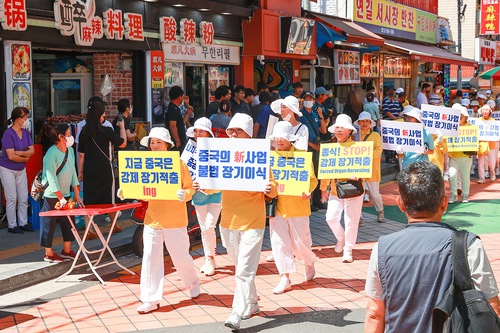 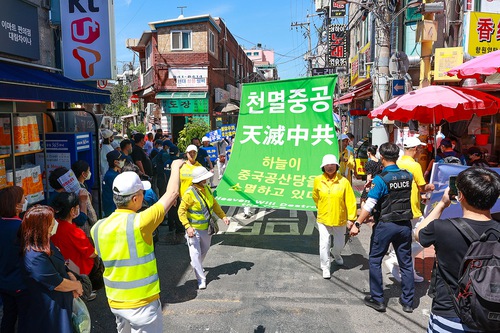 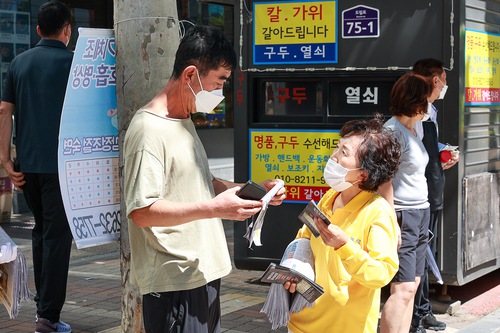 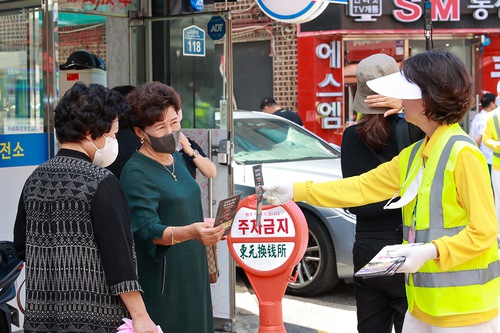 A parade was held near Seoul’s Chinatown on August 28, 2022, to celebrate 400 million withdrawals from the CCP. Many Chinese people watched the parade and learned the facts about the persecution of Falun Dafa.

At 11:30 a.m, the Tian Guo Marching Band started off the parade with the song “Falun Dafa Is Good.” As the parade route was mainly in the markets with many Chinese customers, the police enlisted many officers to help ensure public safety and the smooth operation of the parade.

In a telephone interview, Wu Zhenrong, representative of the Korean branch of the Overseas Chinese Democracy Coalition, said, “It is encouraging that over 400 million people have quit the CCP.”

Mr. Sun, who is from Liaoning Province in China, said after watching the parade, “I lived in the country in China and never joined any of the CCP’s organizations. But I think it is a good thing to quit the Party.”

A Chinese man who lives in Korea and asked to remain anonymous said, “I did not know that 400 million people have already withdrawn from the CCP.” When he learned how he could quit the CCP, he said that he definitely planned to do so.

Ms. Jin Yingmei, 40, who lives in Korea, said, “It is great that so many people have quit the CCP and it is worth celebrating. I hope Chinese citizens who have not done so will renounce their membership soon and lead peaceful lives.” She only learned that the CCP has been taking vital organs by force from Falun Dafa practitioners and selling them for huge profits after watching the parade. She said, “This is unbelievable. Chinese people are good but the CCP is not. It should disappear.”

Falun Dafa practitioners who traveled from other parts of the country to participate in the celebrations said, “This is the first time we were able to speak to so many Chinese about the persecution. We sincerely hope that more people will learn the truth and quit the CCP.”

At the end of the parade route, the Tian Guo Marching Band performed until all members of the parade reached the terminus. Their performance brought the day’s events to a climax, a memorable end to the day’s successful events.