(Minghui.org) Practitioners from 35 European countries and other regions held a rally in front of the Chancellery of the Prime Minister of Poland on September 9, 2022. They told government officials and local residents about Falun Dafa and how the Chinese Communist Party (CCP) has persecuted the practice in China.

Warsaw is the political and economic center of Poland, and the Chancellery of the Prime Minister’s Office is located on a boulevard. Along the broad tree-lined road, nearly one thousand Falun Dafa practitioners demonstrated the exercises. Among them were elderly ones in their 70s and some who were only a few years old.

In front of the practice group, other practitioners lined up in a long chain. They held banners to convey their wishes, such as “Falun Dafa is good,” “Stop the Persecution of Falun Gong,” and “Bring Jiang Zemin (former CCP leader) to justice.” They held the activity hoping that more Polish people and government officials would have the opportunity to learn about Falun Dafa. 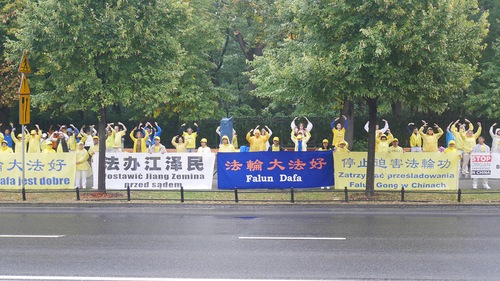 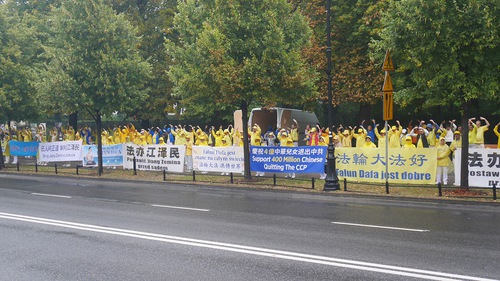 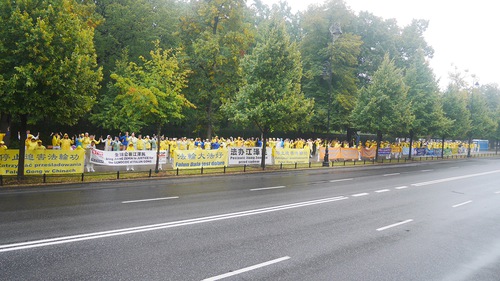 Practitioner Representative: Poles Have the Courage to Help Stop the Persecution

After the morning exercises, Maria Salzman, on behalf of Falun Dafa practitioners in Poland, told people from all walks of life in front of the Prime Minister’s Office that Poland never succumbed to tyranny when it suffered massacres and genocides throughout its history. She called on Poles to stand up and defend the principles of Truthfulness-Compassion-Forbearance to help end the CCP’s violent persecution of Falun Dafa practitioners. 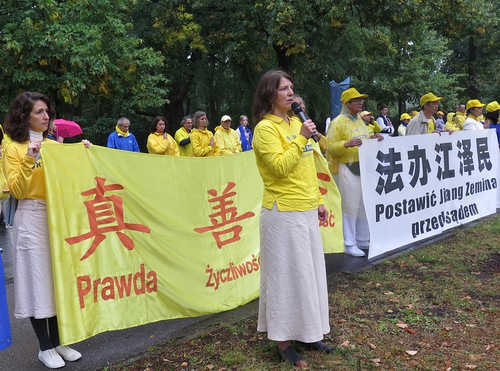 Ms. Salzman reminded people, “Among us are family members of those who suffered during World War II, and those who survived the concentration camps.” She said, “The Third Reich was once an economic superpower in the world. Its cultural life was also greatly promoted. Many people and companies invested in Hitler and his system. On the streets of the highly developed Berlin, one could not see what was going on inside the concentration camps. Most people did not believe those who rang the alarm to tell people about the atrocities.”

Ms. Salzman said that the Poles had the courage to quit the Eastern Bloc. She hopes that Poles also have the courage to help stop the CCP’s persecution of Falun Dafa practitioners.

“Introducing Falun Gong to the Poles”

Polish practitioner Andriej participated in the event and said, “I was moved by today’s morning group practice. So many practitioners practicing the exercises together formed a strong energy field.” 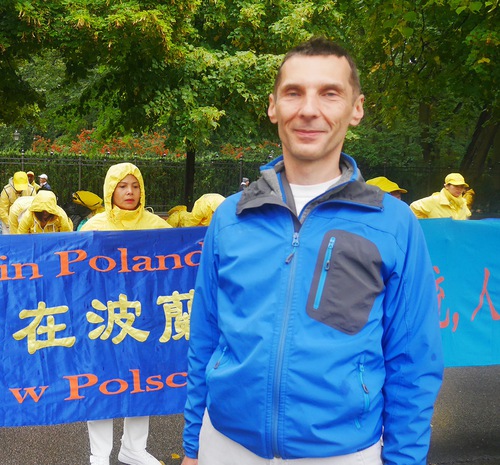 Andriej owns a company. In 2009, he and his wife saw someone doing the Falun Dafa exercises on the coast of Bulgaria. After they returned home, they went online to learn more about Falun Dafa and began to learn the exercises. Andriej has practiced since then.

Andriej said he liked to party and enjoy himself and it messed up his health. He also encountered various difficulties and problems in his life. He said, “After practicing, I got rid of the bad habits of smoking and drinking. I have become healthier.

“Of course, I still attend some gatherings. When my friends ask me why I don’t drink, I tell them that I practice Falun Dafa. I no longer need alcohol and tobacco, and I feel great. I try to correct my behavior according to the principles of Truthfulness-Compassion-Forbearance. I’ve become calm and tolerant and learned to think of others.”

He hopes that the practitioners’ group events will introduce Falun Dafa to the Poles.

Piotr is a department manager and first heard about Falun Dafa at an event organized by Amnesty International in 2018. A practitioner talked about the persecution he suffered in China. The practitioner’s experience caught his attention. Afterward, Piotr found the practitioner, hoping to learn more about Falun Dafa. He read Falun Gong and Zhuan Falun, the main books written by Falun Dafa’s founder Mr. Li Hongzhi. In 2019, he started practicing. 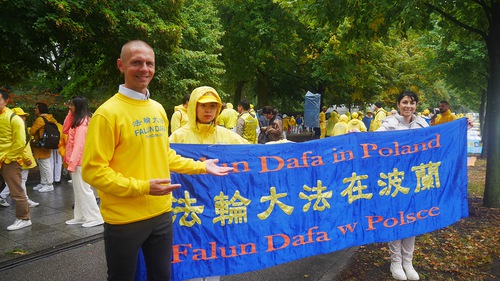 After he began practicing Piotr learned to look within when he faced issues, especially when educating his child. He was able to find his own shortcomings from his child’s behavior. He said, “When I changed myself, my child changed for the better. I didn’t just point out his shortcomings like I used to.”

Piotr said that the purpose of practitioners’ activities is to expose the CCP’s evil nature shown in the persecution of Falun Dafa. He said, “Even while we hold activities in front of the Chinese Embassy, we are not against the people who work for it. The staffers can see how peaceful practitioners are. We hope that the staffers of the Chinese Embassy can be aware of the persecution. All Chinese people are victims of the CCP.”