(Minghui.org) Falun Dafa practitioners held a parade in Budapest, the capital city of Hungary, on August 20, 2022, to bring the goodness of Falun Dafa to the Hungarian people. 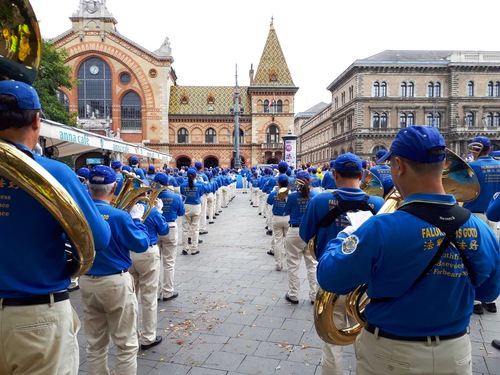 The parade started at Central Market Hall in Fõvám Square, in the city center of Budapest. 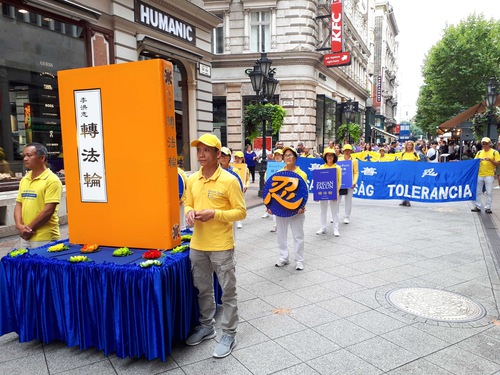 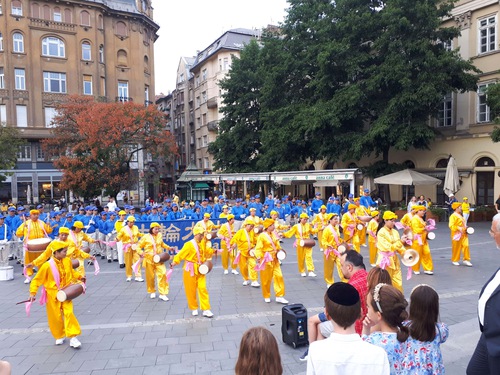 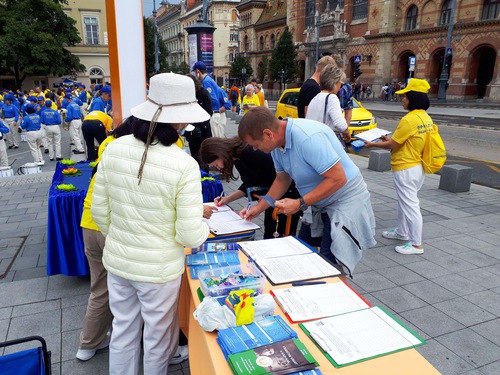 The parade started at Central Market Hall in Fõvám Square in Budapest’s city center. The parade passed through Váci street and reached Kristóf Square, before returning to Fõvám Square. Falun Dafa practitioners also set up an information booth in the square to tell people about Falun Dafa.

The marching band performed throughout the parade and brought joy to the spectators, who lined the streets. Tourists even stood on restaurant balconies along the streets to take photos and videos of the parade. When the band performed “Ode to Joy,” two middle-aged ladies happily sang the lyrics of the song along with the band.

A mother brought her child out of a shop, and a Falun Dafa practitioner walked over to give them a flyer. The child said, “I have many friends from China, I know what I need to do already.” He then took an English flyer.

A family with two children followed the parade procession and walked behind the waist drum players. A practitioner noticed that the child’s father was watching the band performance with great interest, so the practitioner went up to chat with him. The practitioner told him that the principles of Falun Dafa are Truthfulness, Compassion and Forbearance, that the Chinese Communist Party (CCP) is persecuting Falun Dafa and is even harvesting the practitioners’ organs while they are still alive. The child’s father was shocked by the CCP’s live organ harvesting from Falun Dafa practitioners. He asked where he could learn the practice. He said that he thinks people need to place an importance on spiritual cultivation.

An elderly couple were also shocked to learn about CCP’s violent acts of live organ harvesting. They said that they had always wanted to go to China because there are many famous historical monuments there. However, after learning about the CCP’s violent behavior, they said that as long as the CCP is in power, they will definitely not go to China. 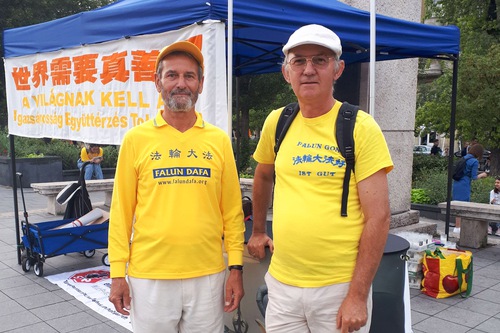 A Falun Dafa practitioner from Germany who joined the event said, “I have participated in similar events in the past, but this time is very special to me because I do not speak Hungarian, nor do I speak English. However, I put my heart into distributing [truth-clarifying materials] and the outcome was very good. It did not take me long to finish distributing the flyers. Hungarians are very glad to accept the flyers. I feel very close to the Hungarians.” 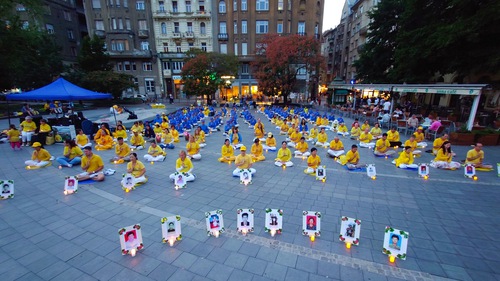 Candlelight vigil in Budapest on August 20, 2022

“Persecution of Falun Gong: Crimes Committed by Shao Lei, Former Director of Prison Administration for the Ministry of Justice”