(Minghui.org) Leesburg, the county seat of Loudoun County and the largest incorporated town in Virginia, issued a proclamation on July 12 condemning the suppression of Falun Gong in China, particularly forced organ harvesting, by the Chinese Communist Party (CCP). 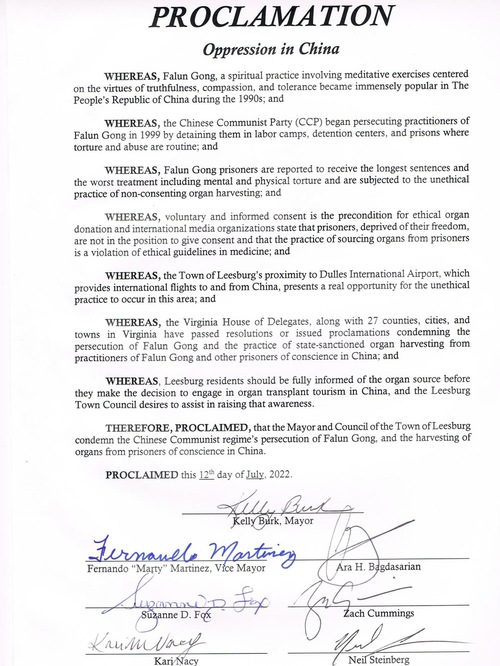 Here is full text of the proclamation:

“WHEREAS, Falun Gong, a spiritual practice involving meditative exercises centered on the virtues of truthfulness, compassion, and tolerance became immensely popular in The People's Republic of China during the 1990s; and

“WHEREAS, the Chinese Communist Party (CCP) began persecuting practitioners of Falun Gong in 1999 by detaining them in labor camps, detention centers, and prisons where torture and abuse are routine; and

“WHEREAS, Falun Gong prisoners are reported to receive the longest sentences and the worst treatment including mental and physical torture and are subjected to the unethical practice of non-consenting organ harvesting; and

“WHEREAS, voluntary and informed consent is the precondition for ethical organ donation and international media organizations state that prisoners, deprived of their freedom, are not in the position to give consent and that the practice of sourcing organs from prisoners is a violation of ethical guidelines in medicine; and

“WHEREAS, the Town of Leesburg's proximity to Dulles International Airport, which provides international flights to and from China, presents a real opportunity for the unethical practice to occur in this area; and

“WHEREAS, the Virginia House of Delegates. along with 27 counties, cities, and towns in Virginia have passed resolutions or issued proclamations condemning the persecution of Falun Gong and the practice of state-sanctioned organ harvesting from practitioners of Falun Gong and other prisoners of conscience in China; and

“WHEREAS, Leesburg residents should be fully informed of the organ source before they make the decision to engage in organ transplant tourism in China, and the Leesburg Town Council desires to assist in raising that awareness.

“THEREFORE, PROCLAIMED, that the Mayor and Council of the Town of Leesburg condemn the Chinese Communist regime's persecution of Falun Gong, and the harvesting of organs from prisoners of conscience in China.

As practitioners continued to raise awareness of the persecution of Falun Gong in China, more and more local governments have been considering this issue and their relationship with China. Loudoun County, for example, passed a resolution in March 2021 to oppose forced organ harvesting in China.

“While the County respects the Shunyi District and its people, it no longer makes sense to pursue a relationship which is unlikely to yield results. In addition, Loudoun residents have expressed concerns about ongoing human rights issues in China which are the subject of much international discussion. It is therefore our recommendation that the Board terminate the relationship.” The motion was supported by all Supervisors.

Located in suburban Washington, DC, Loudoun is one of the wealthiest counties in the nation. As its county seat, Leesburg has also grown rapidly, especially in the past 30 years. It now serves as the center of commerce of Loudoun County and a commuter suburb of Washington, DC.