(Minghui.org) Today’s news from China includes incidents of persecution that took place in 19 cities or counties in 9 provinces, where at least 48 practitioners were recently persecuted for their belief. 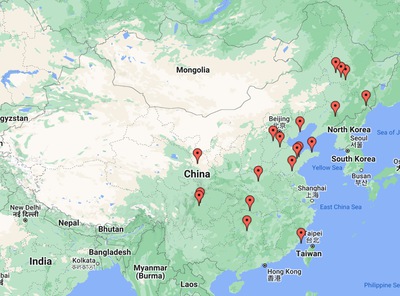 Officers from the Chengguan Police Station searched Ms. Chen Yingxia’s home in May 2022. They confiscated her Falun Gong books, printed Falun Gong materials, a cell phone, and other personal belongings.

Ms. Chen was taken to the police station and interrogated until 6 a.m. the following day.

Zhu Mingdi (gender unknown) and Ms. Cai Xiuying were tricked into going to the Longnan Police Station on July 6, 2022. The officers said their bail expired. They have been detained since then.

Mr. Li Bin, from Botou City, Hebei Province, was arrested by Liu Weipeng and Wang Junan from the Neihuang County Domestic Security Division in Anyang City, Henan Province, in April 2021. Mr. Li has been detained in the Anyang City Detention Center since then. He was sent to Zhengzhou Prison in Henan Province on July 7, 2022.

Three officers went to Ms. Song Xiujing’s home in the Mancheng District on July 11, 2022. They searched her home and told Ms. Song to take a photo with them. She refused.

Later, more than ten officers from the Mancheng District Chengguan Police Station forcibly took Ms. Song to the police car and handcuffed her. They confiscated the photo of Falun Gong’s founder and her Falun Gong books. Ms. Song returned home that night.

Ms. Zhao Shumin, in her 60s, from Chengen Village in Shuangcheng District, Harbin City, was arrested on July 12 by people who may have been from the Hongqi Police Station. She may now be detained in the Shuangcheng Police Department. Further information is pending.

Officers from the Dingxing Domestic Security Division and the Luxi Police Station ransacked the homes of Ms. Xiao Guozhen and Ms. Liu Shufang in Dingxing County in early July 2022.

They confiscated all their Falun Gong books, printed Falun Gong materials, and their TV receiver.

Ms. Xiao is now having difficulty walking because of the harassment. Further information is pending.

Four officers from the Kuiju Police Station, Changyi City, broke into Mr. Qi Huaizhi’s home on June 28, 2022. They confiscated his Falun Gong books, several USB cards, and a laptop computer. They left a summons requesting his daughter go to the police station the next day.

These four officers went to Mr. Qi’s home again on June 30 and asked why his daughter did not go to the police station. Mr. Qi told them his daughter was not at home. They stayed outside his home for several hours before leaving.

At the same time, a practitioner surnamed Zhang was also arrested and taken to the Changyi Detention Center. His personal belongings were confiscated. Further information is pending.

It was reported that the Changyi Police Department arrested more than ten practitioners at the same time.

Officers from the Tumen Cty went to Yanji City, where Ms. Yuan Limei and her daughter Ms. Chi Jingyuan worked, and arrested them. Ms. Yuan and Ms. Chi were taken to the Tumen Detention Center and held there. Further details are pending.

Ms. Jin Xiaoqin was harassed repeatedly by Tuanjiexincun Community Office staff. She was questioned and photographed whenever she left and entered her residential area over the past year.

Ms. Sun Jing, 68, was arrested on September 8, 2021, by officers from the Xinbin County Domestic Security Division and the Xinbin Town Police Station.

Ms. Sun was tried on February 21, 2022, in the Fushun Detention Center. The court notified her family on February 28 that she was sentenced to four years in prison and fined 10,000 yuan.

Ms. Zhang Tingting, an English teacher at the Nanfeng No. 1 Primary School in Guanghan City, was detained by the Shifang City Police Department for five days in November 2021 for talking to people about Falun Gong.

Since November 2021, the Guanghan Political and Legal Affairs Committee, Nanfeng Police Station, the local Education Bureau, and her school harassed her repeatedly by having meetings with her at work and at home, video recording her, and so on. They threatened to expel her from school and detain her if she did not give up practicing Falun Gong.

On March 3, 2022, Ms. Zhang’s job rank was lowered, and she was demoted from her teaching position.

Plainclothes officers from the Hedong Police Station arrested Ms. Chen Yanqiu while she was talking to people about Falun Gong on June 14, 2022. At noon, the deputy chief of the Hedong Police Station attempted to send her to prison. He was unable to do so because Ms. Chen failed the official medical examination at the hospital. They then transferred Ms. Chen to the Qinhuangdao Harbor District Police Department in the afternoon. The police took Ms. Chen’s fingerprints, photographed, and interrogated her there. They asked Ms. Chen to sign the paperwork, which she refused.

Three officers from the local police station broke into Ms. Lan Wenhua’s store in Dumeng County. They went up to the store’s second floor and searched the drawers beneath the bed. They left without finding anything they wanted.

At least fifteen people from the Wuxing Community Office in Puxing Street, Xinjin District, broke into Mr. Luo Yuzhang’s home on July 8, 2022. They took Mr. Luo to the community office and detained him there for more than 10 hours. Mr. Luo was forced to listen to their brainwashing session.

The community staff also pressured Mr. Luo’s wife and daughter to tell Mr. Luo to give up his faith in Falun Gong.

At the same time, officers from the Puxing Police Station ransacked Mr. Luo’s home and confiscated his personal belongings.

Guo Fudui, from the Longkou District Domestic Security Division, led officers from the Xufu Township Police Station to break into Ms. Zou Shuqing’s barbershop on July 4, 2022. They searched the place and confiscated some printed Falun Gong materials and calendars with Falun Gong messages. Mr. Zou was taken to the Xufu Town Police Station.

Ms. Luan Yanping was also arrested at the same time. Guo Fudui interrogated both practitioners and said the surveillance caught them putting up stickers on May 13, 2022. Ms. Zou and Ms. Luan did not answer his questions.

Ms. Zou and Ms. Luan returned home that night but the next day they were told to return to the police station. On the morning of the 5th, the two practitioners were taken to the Longkou City Hospital for medical examinations and were forced to undergo various tests. Ms. Zou and Ms. Luan were then taken back to the Xufu Police Station, where they were videotaped. Blood and hair samples were also collected from them.

Ms. Yu Kaiju was arrested by officers from the local Domestic Security Division on July 8, 2022. Her home was ransacked. It was said she was arrested because she distributed Falun Gong materials.

Among them, Zhang Huaiding, Li Aizhi, Zhou Xiuluo, Liu Damei, and Liu Huiju were taken to the Wuyi Road Branch on the same day. They returned home at midnight that day.

Zhang Huaiding and Li Aizhi were taken to the local police station by Yang Hong and other officers from the Bakuang Police Station on May 16, 2022. They were released on bail that night.

Ms. Liu Aihua was arrested by officers from the Xingung Police Station in the Kaifu District on July 7, 2022. She was detained in the Changsha City No. 4 Detention Center. The police did not notify her family members about her being detained until several days later when her family went to the police station and reported her missing.

Mr. Zhang Zhifeng was arrested by officers from the Yunmenghu Police Station in Mengyin County for posting stickers with Falun Gong messages in May 2020. He was released on bail after being fined 10,000 yuan. The case against him was submitted to the local procuratorate.

Mr. Su Guangming, from Changwu Town, was arrested at his rental home in Daqing City on June 27, 2022.

Mr. Su had to stay away from home for about twenty years to avoid further persecution. His whereabouts were discovered by Wang Lijun, the head of the Zhaodong City Police Department, when Mr. Su was forced to do a nucleic acid test in June 2022.

Wang Lijun, joined by Xiao Jianguo, the head of Changwu Town Police Station, led the police to go to Mr. Su’s home at night and arrested him. Mr. Su has been detained in the Zhaodong City Detention City since then.