(Minghui.org) “Taste of Manila,” Canada’s largest Filipino Street Festival, was held in Toronto on August 20-21, 2022. Many food booths and shops spanned from the beginning of Wilson Avenue to York Downs Avenue in North York, Toronto. The event organizer invited the Toronto Tian Guo Marching Band to perform, and also asked Falun Dafa practitioners to set up an exhibition booth at the event. Many people who participated in the event learned the exercises that were being demonstrated by Falun Dafa practitioners. Some listened to the practitioners clarifying the truth about the cultivation practice, and expressed their support. Some people signed the petition calling for an end to the persecution in China.

Event Organizer: Very Thankful for the Participation of the Falun Dafa Practitioners

The first “Taste of Manila” street festival was held in Toronto in 2014. The number of tourists who participated in 2015 was 200 thousand. This year the event organizer invited the Tian Guo Marching Band, which is made up of Falun Dafa practitioners, to participate in the opening performance. The Tian Guo Marching Band performed the songs, “Falun Dafa is Good,” “The King of Falun,” and “The Sacred Song.” 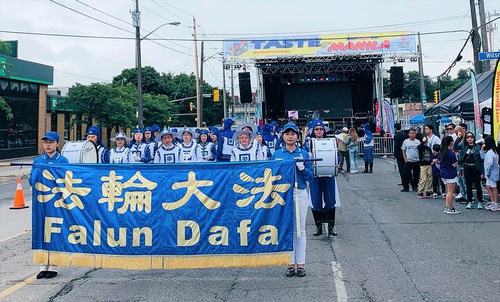 Many in the audience took photos and videos, and enjoyed clapping their hands with the marching band. Some parents also encouraged their children to clap to the rhythm of the songs.

James Pasternak, the York Center councilor, MPP Robin Martin of the Conservative Party, and the event organizer crew walked through all the streets where the event was held. In addition to the Tian Guo Marching Band participation, people saw the “Falun Dafa is Good” banner as they passed by all the booths that were participating in the event. 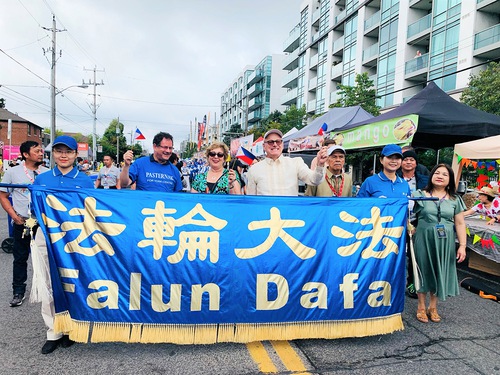 Rolly, who emigrated to Toronto from the Philippines, is the person-in-charge of the Taste of Manila event this year. He said, “I am very thankful for the support that the Tian Guo Marching Band gave to us for our community event today. They let us enjoy such wonderful music.” 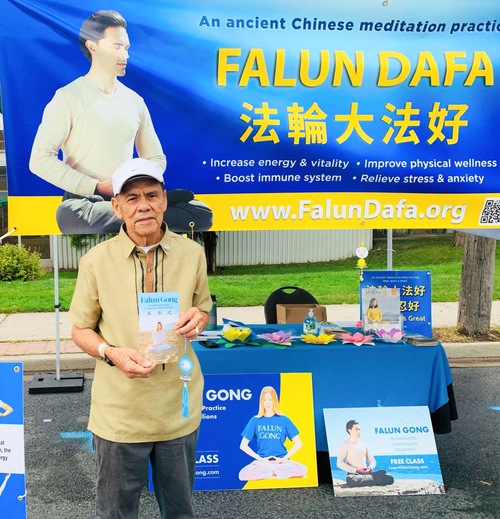 Rolly, the person-in-charge of the event, complimented Falun Dafa for being both beneficial to one’s health, and also helping improve one’s soul.

Rolly said, “We are very thankful for the participation of the Falun Dafa practitioners. I have met Falun Dafa practitioners in the Philippines, when I still lived there, and they told me some information about Falun Dafa. I know that this practice can not only help improve one’s health, it is also a form of cultivation for one’s inner self. I have also learned the first set of exercise through the introduction of a friend. After doing the exercise, I felt very relaxed.” Rolly also said the principles of Truthfulness-Compassion-Forbearance that practitioners of Falun Dafa abide by are very important in today’s modern society.

When he learned that Falun Dafa was being persecuted in China, Rolly said that he is very willing to tell this news to more people. After that, he immediately signed the petition to show his support for bringing an end to the persecution. 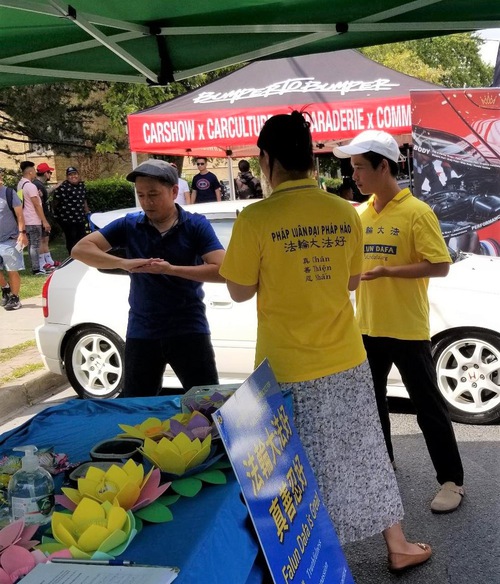 Mark, who currently lives in Etobicoke, said that he heard about the persecution of Falun Dafa five years ago. Therefore, when he saw the Falun Dafa booth, where practitioners were teaching the exercises, he visited the booth twice.

After learning the exercises, Mark said happily, “After I learn this, I am going home to teach it to my son.” Before leaving, he noted the address of the local practice site, and said he planned to contact the site after returning home. 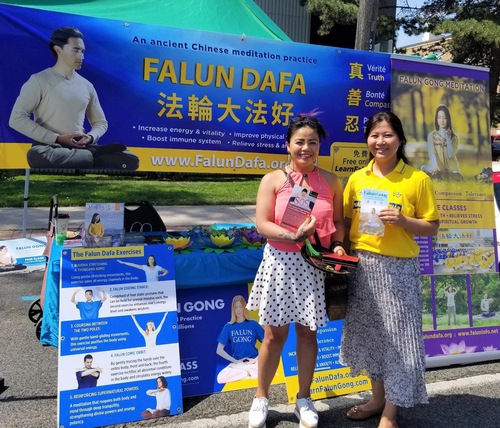 Norma (left), Filipino, took a photo with a Falun Dafa practitioner to preserve the memory.

Norma, a lady from the Philippines, is currently staying at Niagara Falls. She came to the event, and said that she has stayed in Taiwan for two years. She said that she could speak simple mandarin. When she saw the Dafa booth, she came over and asked to learn the exercises. After learning the exercises for about 30 minutes, she said that she wanted to practice Falun Dafa after she returned home. When the practitioner told her that there was also a Falun Dafa practice site at the Niagara Falls’ tourist attraction site, she said happily, “I will go and join them there.” 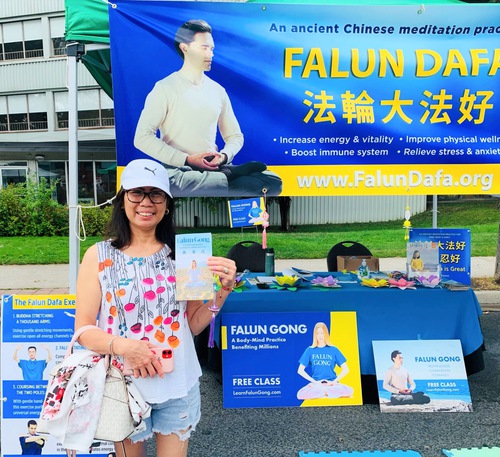 Madia said that she wants to learn and practice Falun Dafa after she returns home.

Madia said that this was the first time she had heard about Falun Dafa. When she finished listening to the information about the practice, she said that she was very interested and will definitely learn and do the exercises when she returns home. She said, “I feel that Truthfulness, Compassion, and Forbearance are very good. To me, I need more compassion.”

Many participants at the event signed the petition, asking the Canadian government to help stop the persecution, and save the practitioners and their family members in China who are suffering under the persecution. They also left their contact information. Some said that they were willing to attend the public events that are being held by Falun Dafa. 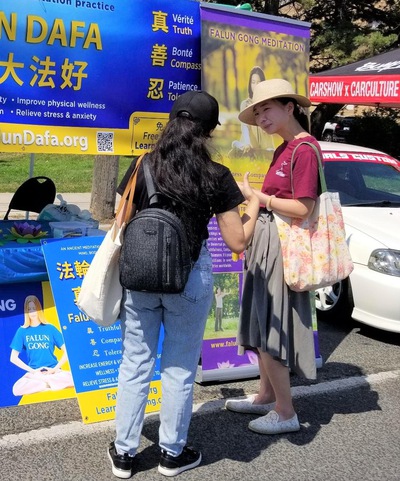 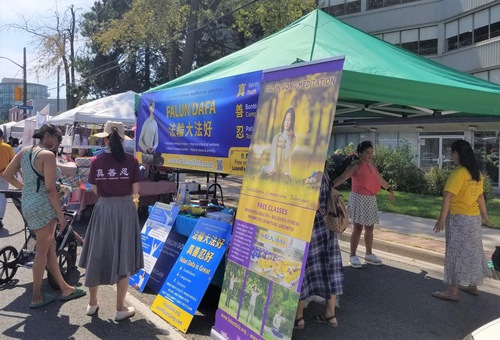 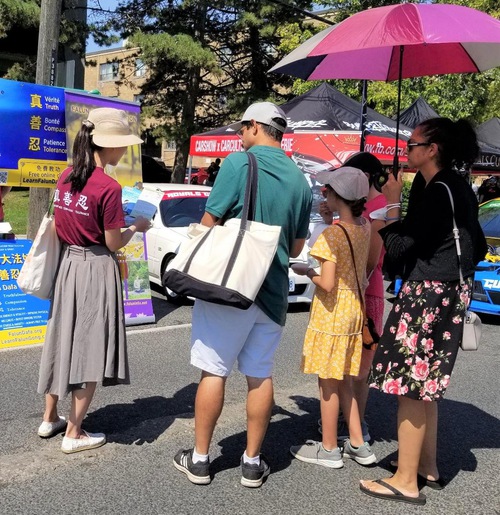 Understanding the truth and learning the exercises 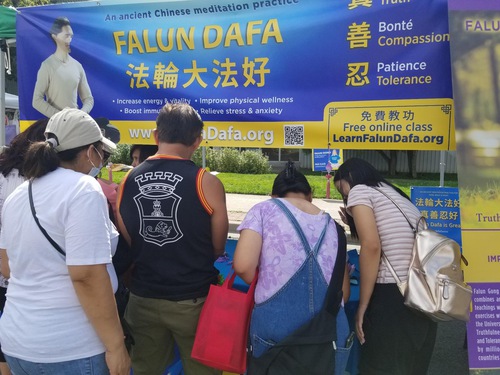 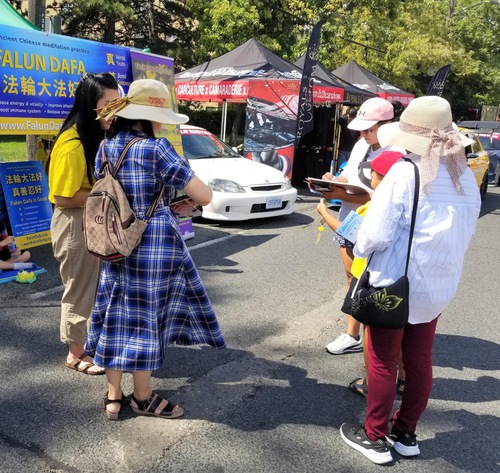 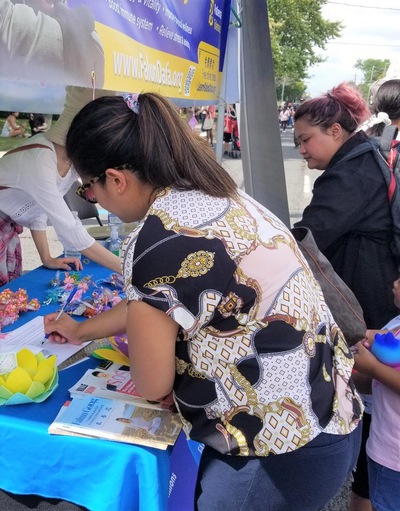 Waiting to sign the petition calling for an end to the persecution perpetrated in China.

Mr. Rommel said, “I heard about Falun Dafa five years ago. I know that they are being persecuted by the Chinese Communist Party (CCP). The CCP regime in China does not allow people to have their own belief. I also know that the CCP is secretly doing live organ harvesting and they do not want to let the Chinese know about it.” 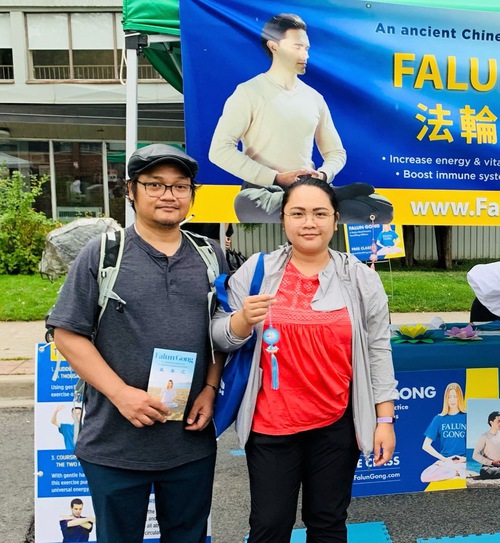 Mr. Rommel and his wife sign the petition board showing their support, calling for an end to the persecution.

He also said, “When I was told the information, I felt upset. The happening of these kinds of things is abnormal. Honestly, I feel that the CCP should be held accountable for their criminal actions, and receive punishment for them.”

Before leaving, Mr. Rommel and his wife signed their signatures on the petition board, calling for an end to the persecution of Falun Gong (also called Falun Dafa). He also said that he was very interested in learning the Dafa exercises. He said when he returns home, he wants to watch the video to learn the exercises.

“17 Years of Imprisonment and Family Agony”

Latest Podcast
Podcast (Cultivation): “How I Guarded Against Validating Myself During Group Fa-Study”
- Aug 26, 2022