(Minghui.org) Falun Dafa practitioners in South Australia held a rally on Adelaide’s Victoria Square to celebrate the withdrawals of 400 million people from the Chinese Communist Party (CCP) and its affiliated organizations. The event was held on August 15, 2022 and well received by the public. 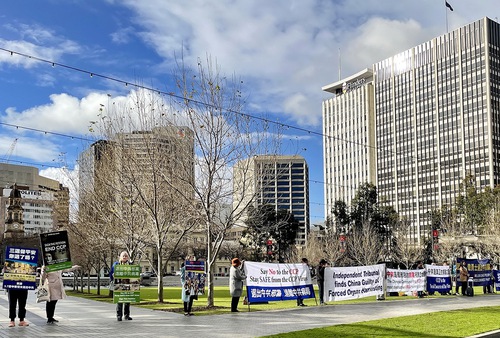 Rally on Victoria Square in Adelaide, South Australia on August 15, 2022

People sign the petition to end the persecution of Falun Gong.

Ms. Mei, organizer of the event, addressed the rally and said that since December 2004, more than 400 million people have announced their withdrawal from the CCP and its affiliated organizations. She said this is a milestone, representing the call of 400 million Chinese people to abandon the CCP from the bottom of their hearts. 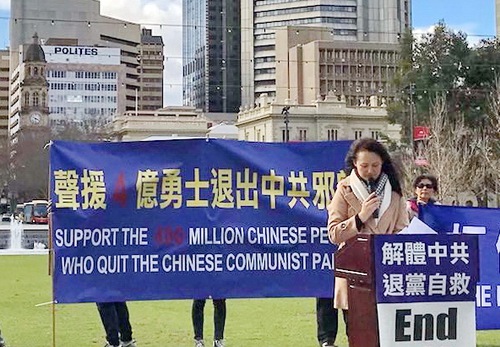 Ms. Mei, the organizer of the event, addresses the rally.

“Now, every day, tens of thousands of Chinese people declare their withdrawal from the Party through various channels such as the Internet, phone calls, and volunteers,” said Ms. Mei. “The CCP is going to sink under the tide of the withdrawals. The CCP does not equal China, and being patriotic does not mean one has to love the CCP. As a Chinese, quitting the CCP means choosing a bright future.”

Brian, a Falun Dafa Association representative in South Australia, said, “Since 1999, Falun Gong has been brutally persecuted by the CCP. Falun Gong practitioners who practice their belief in Truthfulness-Compassion-Forbearance have been persecuted in China and overseas. The CCP has repressed the Chinese people with lies, violence, and controlled the world through threats, coercion, and any other means since it seized power.” 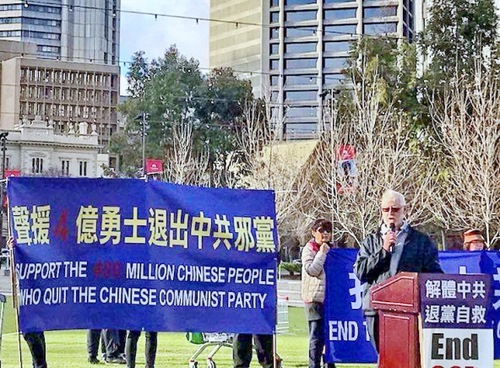 Brian, representative for the Falun Dafa Association in South Australia, addressed the rally.

Brian said, “In 2004, the series of editorials Nine Commentaries on the Communist Party was published by The Epoch Times. The editorials completely exposed the evil nature of the Party and led to the tide of withdrawals from Party memberships.”

Many office workers passed by the rally and some said they knew of the CCP’s bad deeds. They expressed their support and encouraged practitioners. Many signed the petition calling for the disintegration of the CCP. 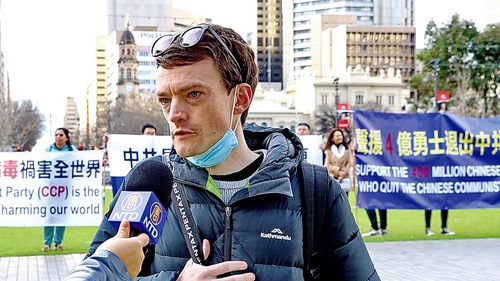 James, a teacher, held a camera with telephoto lens and took pictures of the rally from a distance. He said that he heard about practitioners’ activities from the media and other channels before, but he did not expect to see them in Adelaide that day. He agreed with the message on the banners and said it was a good campaign.

“The CCP conducts brainwashing propaganda here in Australia. I think the CCP is very evil. It prohibits free speech and persecutes the Chinese. It employs violence, racism and genocidal techniques.” 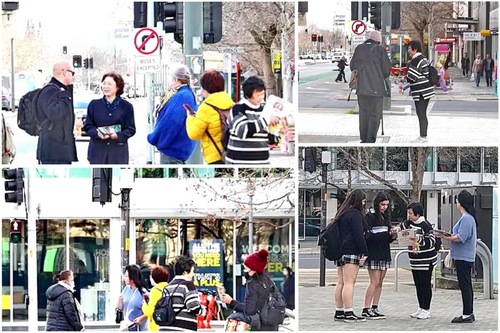 People learn about Falun Dafa and sign a petition against the persecution.

Davidson, an aboriginal in his 60s, learned how the CCP has persecuted good people who believe in Truthfulness-Compassion-Forbearance for many years. He immediately signed the petition against the persecution. He also asked the five indigenous people next to him to sign. Davidson said, “Events like this need to be persistent, non-stop, and held frequently so that more people can learn about this important information.”

Lynn signed the petition and said that she always wanted to learn more about what was going on in China. She said content of the banners was thought-provoking. She said she would take the information she got that day to the community library. She wished everyone would do their part to uphold freedom of belief and freedom of speech.

William looked at the banners displayed by practitioners and said with emotion, “Communism is evil. I understand that the CCP’s days are numbered.”

“Master Made the Arrangements for Me to Clarify the Truth”

“Podcast (Cultivation): “I Finally Learned How to Look Inward””