Parents and teachers were delighted to see the attendees’ positive changes. Many parents said their children did the exercises conscientiously after returning home from camp. They also noted that the kids became more compassionate and patient after attending group Fa study twice daily during the summer camp.

Each day began and ended with practitioners doing the exercises and Fa study. During the day, from 9:00 a.m. – 5:00 p.m., attendees took part in various traditional culture classes such as music, chess, calligraphy and drawing. Teachers also took the children on outings and had special activities like a campfire. The children behaved exceptionally well. They never shouted or misbehaved. Unlike most children their age, they were not addicted to their mobile phones. They did the exercises quietly outdoors every morning and evening. 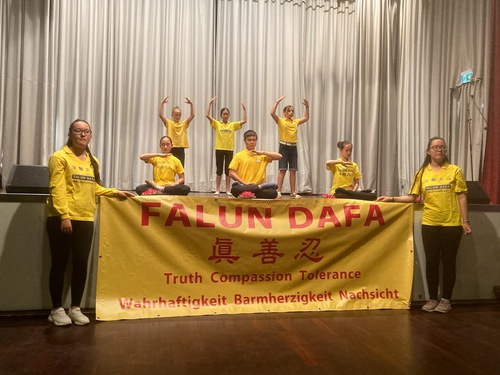 Teachers and students do the exercises on the grass outside the youth hostel.

Resolving Conflicts Through Looking Within

Conflicts sometimes cannot be avoided among children from different countries who speak different languages. At the camp, parents and teachers did not emphasize who was right or wrong but encouraged the young practitioners to look within to find the cause of the conflict.

Xiao Lian, 11, felt that one girl was easily agitated and hard to get along with. The teacher reminded her to reflect on her own shortcomings. Xiao Lian thought about it and discovered that she also had difficulty controlling herself. She realized the classmate’s behavior was a reflection of her own shortcomings. She then understood how important it is to forbear. The teacher reminded Xiao Lian to thank this girl for helping her see her own issues. After she changed her perception, Xiao Lian later said she no longer felt it hard to get along with her classmates.

Xiao Hui, 8, lives near Berlin. She complained that one classmate usually decided which games everyone would play and consequently she disliked this person. Her mother reminded her to conduct herself according to the teachings of Dafa. She immediately said, “I should look within when conflicts arise and not get upset with others.”

Parent: I am Gratified to See the Children’s Positive Changes

A mother from Berlin helped out at the summer camp and was gratified to see the changes in her child.

She said, “My child is considered smart in school and usually gets good grades without much effort. Therefore, she does not know what it’s like to work hard. While attending the summer camp, she found it a challenge to learn basic Chinese classical dance movements. She discovered she had to keep practicing in order to do the movements, and consequently cherished the results of her efforts. To me, what she went through is a great lesson. It helped her understand what it means to work hard and she learned to cherish the outcome.”

Another mother said the camp was a wonderful opportunity for so many children of Falun Dafa practitioners to come together and learn to improve together. Her son is in his teens. Sometimes, he was reluctant when his parents asked him to join them in doing the exercises and studying the teachings at home. At the camp he lived with other kids his age in the same room. His roommates woke one another up in the morning to go outside and do the exercises. After the camp, her son conscientiously joined his family members in doing the exercises at home.

At first, Jonas, 12, found it hard to wake up early in the morning to do the exercises. After camp, he happily got up early and studied the Fa without being reminded. Toys were sold in front of the youth hostel and several children used their pocket money to buy them. Jonas wanted to buy a toy as well. His mother told him, “If on the last day of camp you feel that this is indeed what you need and you feel that you have done well, then treat yourself by buying the toy.”

Jonas said, “All right, I will set a goal. I will buy myself the toy if I can persist in doing the exercises tomorrow and the day after.” However, two days later, he decided he did not want to buy the toy after all. His mother was delighted to see him learn to restrain himself instead of following his desires.

Learning to Work Together

A girl in her teens wanted to wear a Han costume that she loved. She was unhappy when she saw her teacher hand the costume to another girl to try on, and she was given another costume. The teachers then reminded everyone that the audience looks at the overall effect of the performance; personal desires are not important. The teacher then asked the children to gather in front of the mirror. By then, the girl stopped resenting the costume she was given. Instead, she said she realized that her height suited the position she was assigned and the colors of the costume paired well with those next to her.

After the cultural performance, Xiao Lian from Germany said, “I used to think that being competitive was being diligent. However, in the summer camp I saw every classmate focused on how to improve the overall effect. Everyone helped the others. This gives me even greater motivation to improve my cultivation.”

Attendees Hope to See Each Other Again Next Year

The children held a two-hour performance at Stadthalle in Bad Marienberg at the end of the camp. They demonstrated the five sets of exercises during the first half of the performance, as well as classical Chinese dance. In the second half of the show, the young practitioners sang and performed music composed by Dafa practitioners, as well as classical pieces. The MC introduced Falun Dafa and traditional Chinese culture to the audience. 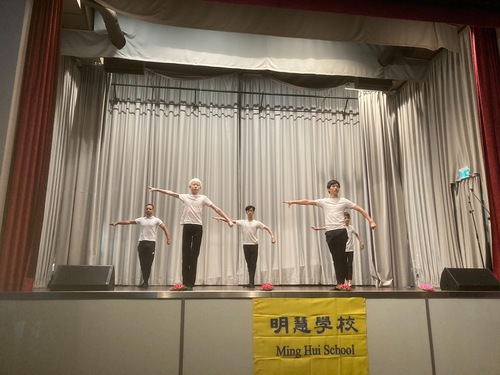 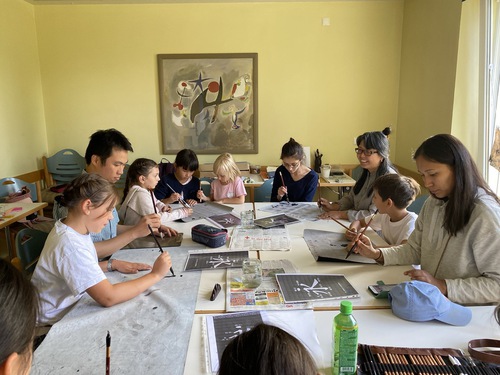 Calligraphy classes were part of the Minghui summer camp.

Parents who participated in the camp hope that it will be held again next year. They feel it offers an environment for young practitioners to improve in cultivation with others their age.