Home > Karma & Virtue > Voices of Support Worldwide
U.S. Congressman Voices Support for Rally Calling for an End to the Persecution of Falun Gong
Aug. 18, 2022 | By a Falun Gong practitioner in Missouri

(Minghui.org) On August 12, 2022, one day before Falun Gong practitioners from the Midwest U.S. were set to hold a rally in front of the Chinese Consulate in Chicago, Jason Smith, a Congressman from Missouri, sent a letter to stand in solidarity with the practitioners and give his full support for their efforts to end the cruel and unjust persecution.

Below is the full text of his letter.

I write to voice my support for your ongoing efforts to shed light on the cruel and unjust actions of the Chinese Communist Party (CCP) against practitioners of Falun Gong. I share your goal of bringing an end to the CCP’s unjust persecution of religious and ethnic minorities in the People’s Republic of China.

Among the most horrific of the CCP’s abuses, is the systematic, state-sanctioned organ harvesting from non-consenting prisoners. This barbaric practice against a peaceful religion is a gross violation of human rights and religious freedom. For many years, Falun Gong practitioners have courageously spoken out about the human rights abuses they and others have suffered at the hands of the CCP. I am privileged to have met with several Missourians who have shared with me the suffering they, their families, and loved ones have endured, and I am proud to have supported efforts calling on the government of China to end the practice of forced organ-harvesting.

I continue to stand in solidarity with you in your fight against persecution, and I give my full support to your efforts to shine a light on the egregious violation of human rights carried out by the CCP. Religious freedom is a foundational human right we are privileged to enjoy here in the United States. But sadly, many around the world are unable to share in this fundamental right. You can rest assured that I will not stop in my efforts to support human rights and religious freedom for all while serving in Congress. 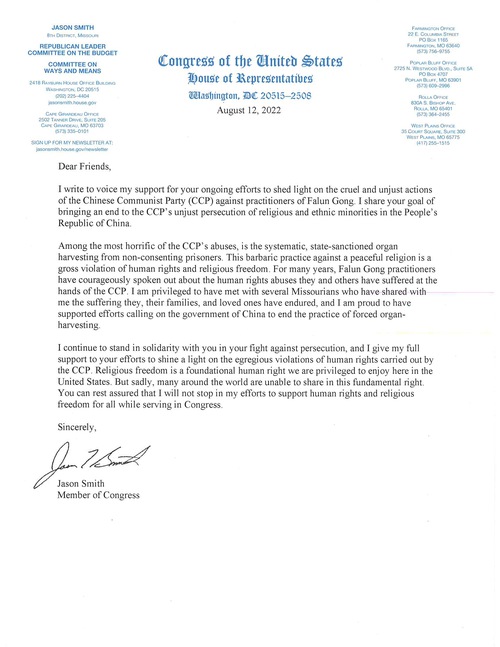 “My Understanding from Reading the Editorial “Call for Articles for the 19th China Fahui on Minghui.org””

Latest Podcast
Podcast (Cultivation): “Looking Within to Cultivate Myself”
- Aug 18, 2022