(Minghui.org) Choi Seong-gi, 55, is the director of Woosuk Dental Clinic in Gimje-si, South Korea. His wife is a middle school principal and they have three children. If you ask him what he is most grateful for in his life, however, he says it is Falun Dafa.

It was around 2000 that Choi first heard about the practice. At that time, he had just finished studying in Japan and was working at a university hospital. One day, several professors at the medical school were talking about a qigong system in China. “Lots of people practice it—it’s a very good system,” one of them explained. “But unfortunately it has been suppressed by the Chinese Communist Party (CCP).”

Interested in spiritual things, including qigong, Choi was impressed and learned the system was called Falun Dafa. Over the next few years, however, he still tried other systems. One day he somehow remembered Falun Dafa and decided to give it try. So he downloaded the exercise video from the FalunDafa.org website and began to learn. 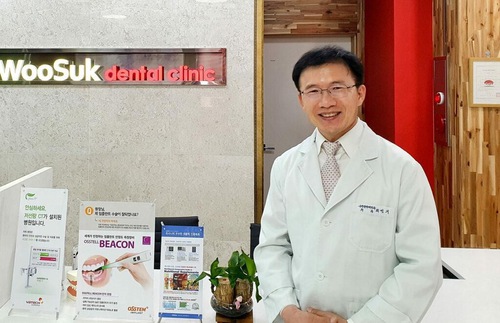 Choi Seong-gi, director of the Woosuk Dental Clinic, said he learned many things from Falun Dafa that are unavailable anywhere else.

Not long after that, he noticed that the convenience store he often frequented had Falun Dafa pamphlets on display, so he struck up a conversation with the store manager and asked about them. It turned out that the manager’s wife had been practicing Falun Dafa for a number years, and they both liked it a lot. “It was interesting that I had never met any Falun Dafa practitioners before,” Choi recalled, “but when I wanted to practice it, they were right around the corner. I felt so fortunate.”

As time went on, he not only did the practice at home, but he also told his neighbors and friends about it. They were perplexed. “I’ve heard that people who are frustrated or depressed might end up in temples or meditate in the mountains,” one person said. “But you have a successful career and a beautiful wife. What made you interested in this?” When that happened, Choi would smile and share his story.

Since he was a child, sunsets had depressed him. They made him feel sad and empty, even fearful and panicky. Although he was young, he often wondered why we came to this world and what happens to us after death.

Looking for answers, he began to study Taoism, in particular Kendo, a martial art that uses a bamboo sword. After practicing it for 25 years, he reached Level 5. Instead of stopping there, he continued studying qigong, inner elixir, and Shaolin Kung Fu.

Despite stacks of books and decades of time, Choi was still not satisfied with what he found until he ran into Falun Dafa. “To me, this is the True Way, and I no longer need to search anymore,” he said.

Falun Dafa not only answered Choi’s questions, but it also taught him much more.

One example was the time he studied in Japan. Before that, he felt good about being a dentist, even a little superior and arrogant. But with over 600 other dentists at the Japanese university, he felt like just a poor student from another country. That really bothered him.

That negative feeling festered within him for years. It was not until he became a Falun Dafa practitioner that he had a better understanding of why that was. “To me, being a dentist meant fame and wealth. That was why I could not accept it at the time,” he said. “As a practitioner, now I know how harmful—and miserable—the attachment to fame is.” This helped him understand why one should forsake such attachments. 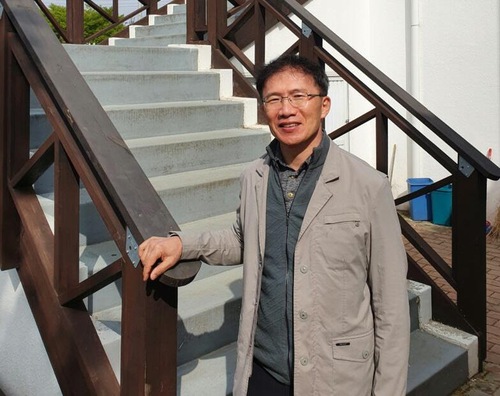 Choi often hands out Falun Dafa information at the entrance to a coffee shop in a park near his home.

The Mentality of Struggling

For health reasons and as a spiritual pursuit, Choi used to study Kendo and other systems. After studying Kendo for 25 years, he had developed an attachment to fighting. Sometimes, even without saying it out loud or doing anything, his mind was wild like boiling water.

When he first began to practice Falun Dafa, Choi still had a bad temper and was sometimes furious with his wife. But after a while, he would apologize. “I would rage at her one minute and then calm down and sincerely apologize to her the next. My wife was confused—she did not understand or know how to handle it,” Choi recalled, a bit embarrassed.

As time continued, Choi was also able to do better at work. A patient once came in with a complaint. The doctors did not find anything wrong, but one of the patient’s cheeks was still swollen and inflamed.

Although he wasn’t the person’s attending physician, as the director of the clinic, Choi was very worried about that patient. “One day I suddenly realized that, as a practitioner, I should look inward,” he explained. “Then I noticed I resented the attending dentist.”

The next morning, Choi apologized to the dentist. When the patient arrived, they were surprised to see that his condition had improved dramatically. “I was very touched—this is what cultivation is,” he continued, adding that situations like that had happened to him many times.

Looking back on his cultivation journey, Choi is very thankful for the opportunity to cultivate.

“Falun Dafa taught me the meaning of life and much more—I had been searching for decades and no other practice offered enlightenment like this,” he said. “This practice is truly amazing.”

With an inner peace gained from Dafa, Choi always finds many areas in which to improve. “As a practitioner, I will do better in cultivation and fulfill my responsibilities,” he said.