(Minghui.org) Society has changed over time, but we can learn many things from ancient Chinese culture that are applicable to our modern world.

When Confucius and his disciples traveled to Kuang (in today’s Changyuan City, Henan Province), the locals mistook him for an enemy and surrounded him and his followers. This went on for several days, and his disciples were worried.

Confucius, on the other hand, was very calm. He said, “After King Wen of Zhou passed away, the ancient culture was passed down to me,” he explained. “I would not be able to teach it to people if the divine wanted to destroy it. But if the divine intends to keep it, what can the people of Kuang do to me?”

He then took out a guqin (a plucked, seven-string Chinese musical instrument) and played ritual music. This convinced the locals that Confucius was a sage and not an enemy, so they dispersed.

In Lun Yu (The Analects), Confucius said, “A compassionate person has no worries, a wise person has no confusion, and a courageous person has no fear.” The courage he referred to was not power, weapons, or money. Rather, it was a person’s determination to follow the law of heaven.

There are other such examples. Su Wu, a diplomat in the Han Dynasty, was captured and detained in the Xiongnu territory for 19 years, but no hardship—including cold, starvation, and the temptation of a comfortable life—had any effect on his loyalty and determination.

Another example was Wen Tianxiang, a chancellor of the Song Dynasty. After being captured and tortured by the invading Yuan forces, he refused to yield and was executed four years later. During that time, he wrote the following to highlight the importance of caliber, “All men are mortal, but my loyalty will illuminate the annals of history forever.”

That tradition of striving to be of upright character was nearly lost after the Chinese Communist Party (CCP) seized power decades ago. Almost drowning in the waves of political campaigns including the Cultural Revolution, traditional values were purged and the public at large turned to valuing material interests while neglecting principles.

In the hearts of Falun Dafa practitioners, however, the determination be a good person continues to flourish. By following Truthfulness-Compassion-Forbearance, practitioners strive to be better citizens wherever they are. Even after the CCP began to suppress the practice in July 1999, practitioners remained true to their faith and did not yield to the totalitarian regime.

In October 2000, Ms. Fang, a practitioner nearly 50 years old, was being held in a detention center for her belief, when four inmates beat her over the course of eight hours. They knocked her head against the wall and broke her ribs. After the electric batons ran out of power, they tied her up. The inmates said even those convicted of homicide could not endure such torture, but Ms. Fang remained determined. 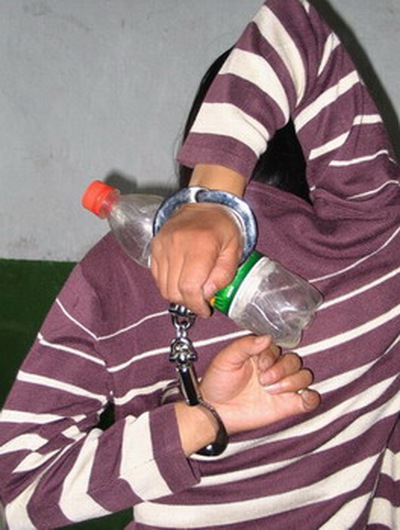 This went on for several days, and the guards kept hounding her to turn in other practitioners. But she refused. After some time, several police officers showed up and handcuffed Fang’s arms behind her back. They said that no one could endure this for more than 20 minutes due to the extreme pain. To make it worse, an officer inserted a wine bottle under the handcuffs, He said the torture would not stop until Fang gave in.

“I will not give up Truthfulness-Compassion-Forbearance no matter what,” Fang thought to herself. In her mind, she began to recite Hong Yin and other Falun Dafa teachings. After an hour, she was in such extreme pain that she began to vomit.

“An officer who seemed to be familiar with this form of torture squeezed my hands once every several minutes,” Fang recalled, “and it felt as if all my bones were being crushed. I vomited so much I was afraid my intestines would come out.”

“If you ask for mercy, we will stop and let you go home,” one officer said. But Fang shook her head; she could not open her eyes.

Many days passed and the officers stopped torturing her. One day, they told Fang the interrogation was over and an officer asked, “Now, could you tell me why you are so loyal to Falun Dafa?”

Ms. Fang told them about the pain she’d been in before she started practicing Falun Dafa. Because of the practice, the pain went away and she regained her health. She also became a good person. She commented on the chaos that society is in today and averred that Master Li, the founder of Falun Dafa, brought hope to practitioners and the world. When an officer claimed that Falun Dafa was “political,” Ms. Fang told him that practitioners sought no personal or political gain, and that it was the CCP that was violating their basic human rights.

In the end, these officers had a better understanding of Falun Dafa. “I promise not to beat practitioners anymore,” one of them said to Ms. Fang.

Another incident happened to Rong, a practitioner from Jilin City, Jilin Province. When he and another practitioner, Fan, were talking to people about Falun Gong in September 2003, someone reported them. The police came and dragged Fan to the police van.

Believing that all practitioners are one body, Rong went over to pull Fan away from them while trying to explain to the police about Falun Dafa. “What are you doing? It is none of your business!” one officer said.

“I am a Falun Gong practitioner, too,” Rong replied. “You are doing a bad deed by arresting an innocent person.” The officer took out his gun and pointed it at Rong.

“Please put it down,” Rong said as he looked at him calmly. “The police are equipped with weapons to stop crimes. We practitioners are telling people to be good citizens. It is a noble act and we should not be treated like that.” The officer put down his gun but still wanted to take Fan with him. Rong did not budge.

“Give me you name and address, and I will release him,” said the officer. Rong gave him the information without hesitation. “How do I know you aren’t lying?” the officer asked. “I am a Falun Dafa practitioner—you can count on me,” Rong replied. Impressed by Rong’s honesty, the officer left.

A few days later, two police officers showed up at his door. “We released the other practitioner that day, but we have to arrest someone to close this case,” one of the officers said as he tried to grab Rong. Rong resisted. The two officers called over ten additional officers and they carried Rong into the police van.

Inside the van, Rong calmly talked about how he’d benefited from Falun Dafa. “There is a saying ‘Good is rewarded and evil is punished.’ You know Falun Dafa practitioners are innocent, good people. Right?” He told them that even former CCP leaders such as Jiang Zemin had been sued overseas for persecuting Falun Gong.

At the station, Rong refused to answer questions or turn in other practitioners. He just told officers “Falun Dafa is good.” In the end, that was the only thing the officer wrote in the interrogation record.

After a while, Rong’s wife came to the police station with a towel, toothbrush, and toothpaste, thinking he might need them for the night. “No worries. I will be back home soon,” Rong told her. So his wife took them with her and left.

Later on, Rong indeed left the station as the officers watched, and returned home safely. Impressed by his integrity, no one stopped him or went to his home to harass him later on.

There have been many such incidents throughout the suppression of Falun Dafa in China. But due to the CCP’s information blockade, only some of them have been recorded on Minghui. When this chapter of history closes, people will know this was a special period of time – a battle between good and evil.

“Truthfulness-Compassion-Forbearance Guides Me to Be a Better Person”