(Minghui.org) Falun Dafa practitioners in Croatia held activities to expose the Chinese Communist Party’s (CCP) persecution in the coastal cities of Rovinj and Rijeka on July 23 and 25. Tourists and local people learned about Falun Dafa and its principles of Truthfulness-Compassion-Forbearance. Many were appalled to hear the details of the CCP’s 23-year-long persecution. 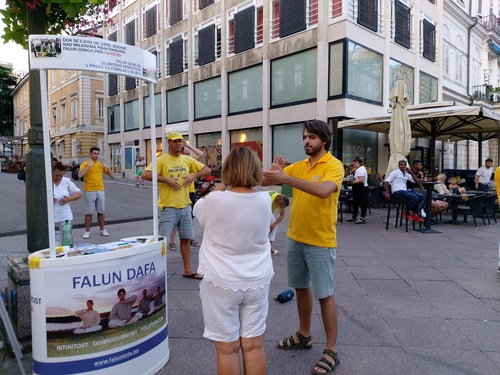 Practitioners demonstrated the exercises and some people learned them on the spot. 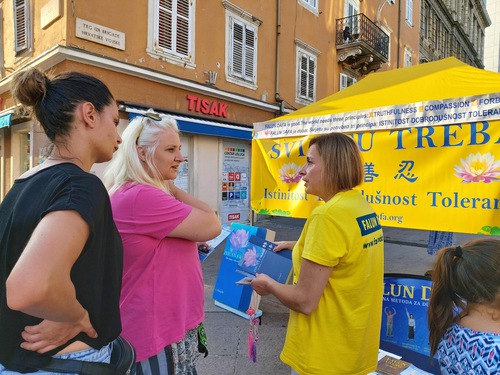 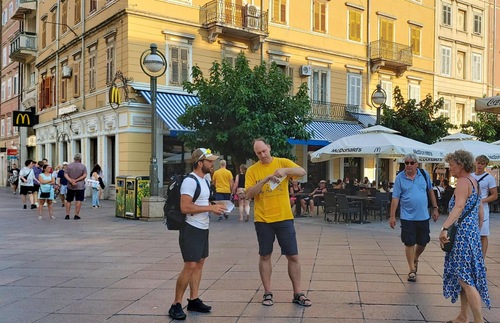 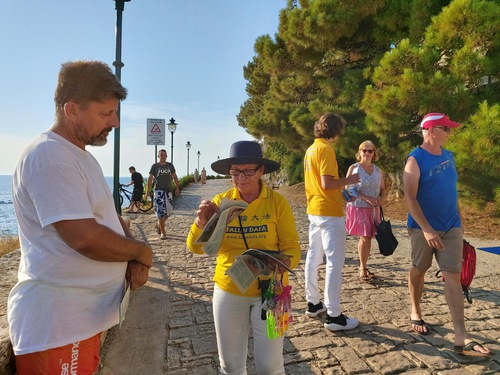 Practitioners tell people about Falun Dafa and the CCP’s persecution. 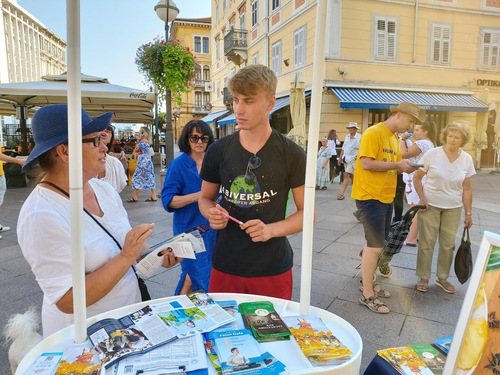 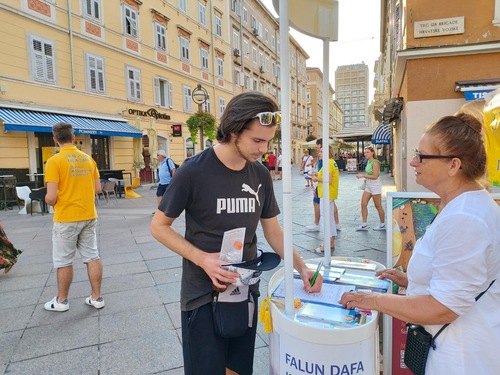 Former Reporter: Live Organ Harvesting Is What a Criminal Gang Would Do

As soon as practitioners set up the booth in Rijeka some people came to sign the petition. Nikola, a retired reporter from a former Zadar radio station, said he had not heard of Falun Dafa before, but knew that China had many problems. When he learned that the CCP conducts organ harvesting from practitioners while they are alive, he said, “This is something only criminal gangs would do.” 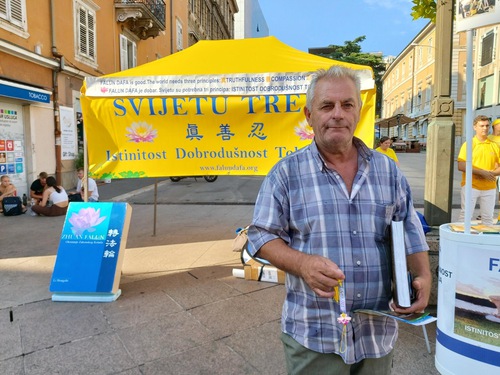 Nicola said, “I signed the petition to protest the CCP gang.” 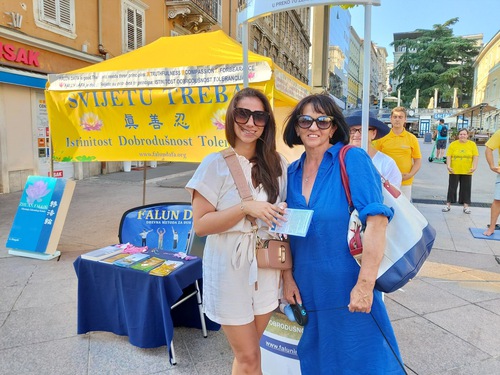 Ljubica and her daughter Laura hope more people will speak out against the persecution.

After Ljubica and her daughter Laura signed the petition they wanted to learn more about Falun Dafa. Seeing that practitioners were busy, they patiently waited.

The mother and daughter listened to a practitioner explain what practicing Falun Dafa involves for quite a while. Before leaving, they suggested that practitioners hold more activities so that even more people could learn about the issue. 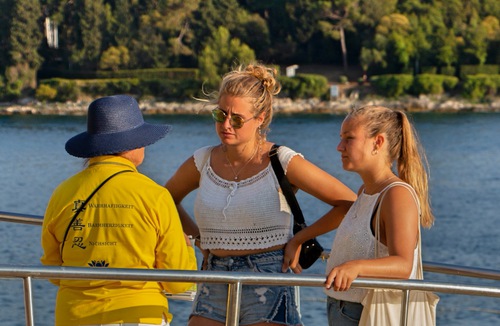 Mother and daughter from Germany listen to a practitioner’s explanation

In Rovinj, a mother and daughter from Germany quietly listened to a practitioner’s truth clarification in German for a long time. They said that live organ harvesting is horrible and these horrors happen in the dark and are not reported in the mainstream media. The mother and daughter sincerely wished the practitioners a successful event. 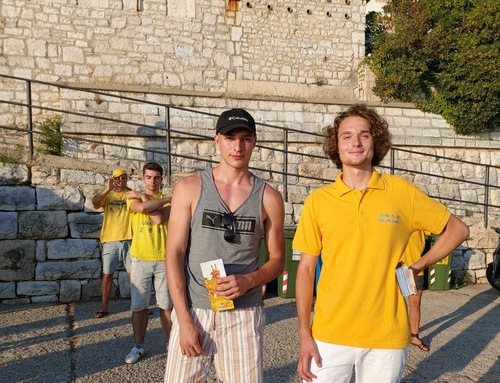 Eric who practices yoga, praised practitioners for telling people about the principles of Truthfulness-Compassion-Forbearance. When he heard how practitioners are persecuted in China, he was shocked and said it was terrible.

After he signed the petition Robert from Rijeka said that he learned a lot about China through The Epoch Times. He said that it was difficult for people to know what was really happening now as few media reported the truth. He told the practitioners that The Epoch Times was a rare media that dares to tell the truth, and he often reprinted its articles on his independent media.

A girl who hurried past the booth stopped when she saw the banner that read “Stop the persecution of Falun Gong.” She told practitioners that she had been to China and witnessed how the CCP police brutally treated practitioners on the street. She said that she never signed any petitions, but she was happy to sign in support of Falun Gong.

The two-day event was from 5:00 p.m. to 10:00 p.m., and there was an endless stream of tourists passing by. The practitioners lit candles after 9 p.m. and sat quietly to commemorate the fellow practitioners who were brutally persecuted to death by the CCP during the past 23 years. The solemn and sacred music reverberated on the street, and people quietly read the information on the banners when they passed by the vigil 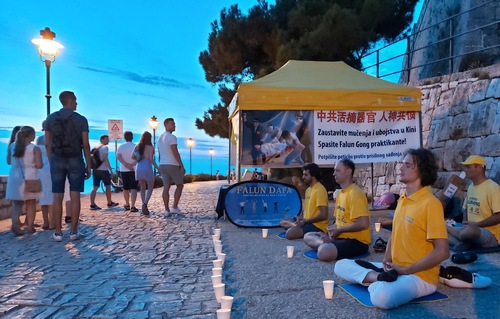 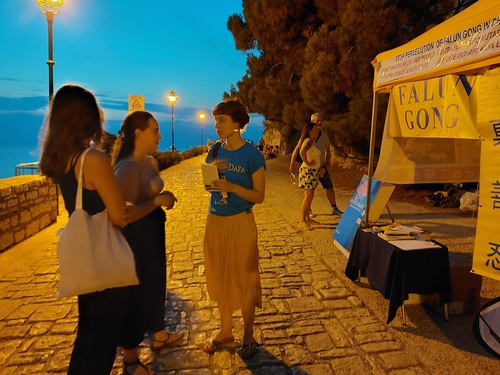 Latest Podcast
Podcast (Cultivation): “Looking Back on Those Unforgettable Years: I’m So Glad I Did Not Divorce My Wife”
- Aug 12, 2022