(Minghui.org) Today's news from China includes incidents of persecution that took place in 19 cities or counties in 10 provinces, where at least 63 practitioners were recently persecuted for their belief. 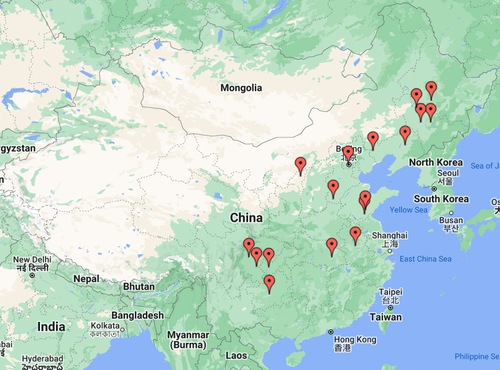 Yang Xu of the Banan District, also known as Yang Chunrong, will be tried in the Jiulongpo District Court at 10:30 a.m. on August 1, 2022.

Ms. Chen Wenjuan, who lives in the Jiang’an District, was sentenced to 14 months in prison in May 2021 for talking to people about the persecution of Falun Gong. When her term ended on July 19, 2022, her family went to pick her up. They were told the Jiang’an District Political and Legal Affairs Committee would not release her. Instead, she was taken to a brainwashing center at an undisclosed location.

Liu Zejin, who worked in Yantia City, was arrested in his or her apartment by officers from Linyi City on the morning of July 20, 2022. Liu’s computer was confiscated.

Liu Fuhua from the Nanan District was arrested by Yubei District police around 11:00 a.m. on July 17, 2022, when Liu was mailing letters with Falun Gong information in the Yubei District. The officers ransacked Liu’s home and confiscated six Falun Gong books, over 10 Falun Gong printouts, and paper currency with Falun Gong messages printed on them worth over 300 yuan. They took Liu to a police station in the Yuzhong District, where they questioned, registered, and forced Liu to sign and give fingerprints.

Gong Pirong was arrested at home by local police station officers on July 25, 2022.

Ms. Jiang Bin lives in Baodun Village, Xinping Township, Xinjin District. Xinping Township Comprehensive Management Office officials called her husband on the afternoon of July 1, 2022, and said they were looking for her regarding Falun Gong.

The office called her around 7:00 a.m. on July 5, 2022, and told her they would be at her home at 8:00 a.m. Nine people from the Chengxi Police Station and the township Comprehensive Management Office came to harass her after 10:00 a.m. That night, several officers collected information from her neighbors.

On July 6, several people from the Baodun Village Committee went to her home and told her to go to the committee office and sign documents. She did not comply.

On July 7 and 11, people from the township Comprehensive Management Office tried to force her son to sign documents for her. They warned him that his education and employment would be affected if he didn’t. He was forced to sign on July 12.

Around 10:00 a.m. on July 14, two officers from the Chengxi Police Station and two people from the township Comprehensive Management Office went to her home and took photos of her mother-in-law and her husband.

At 2:00 p.m., Lu Jun called her husband and ordered her to report to the village committee office. Lu then went to her home and demanded that she and her husband come to the office.

When she went there at 2:30 p.m., three people said they were from the “Care and Love Center,” an ironic name for a brainwashing center. A woman took pictures of her and asked why she practiced Falun Gong, when and where she’d learned it, who’d taught her, and who she practiced with. Within 10 minutes she became sick. They stopped questioning her.

From 4:00 p.m. to 4:30 p.m., eight people from the Chengxi Police Station, the town Comprehensive Management Office, and another township went to her home and seized a picture of Falun Gong’s founder and other items. The officers pointed to the confiscated items and warned her husband that she would be sentenced. When they ordered her to sign a prepared statement, she tore it up. When the officers failed to get her fingerprints by force, they forced her husband to sign a guarantee statement.

Mr. Yue Nailiang has been held in the Yongji Detention Center since he was arrested at his mother’s home on February 14, 2022. His mother is in her 80s and he is her caregiver. His younger brother, Mr. Yue Naiming, was held in the Gongzhuling Prison.

Ms. Li Ke was arrested and taken to the Zhaohua Detention Center on July 21, 2022.

Ms. We Hong was arrested in Zhou Guanghui’s home by officers from the Xianfeng Police Station at 7:30 a.m. on July 11, 2022, when she was visiting Zhou. She was given criminal detention for carrying paper currency worth 3,000 yuan with Falun Gong messages printed on them. She is being held in the Harbin No. 2 Detention Center.

Ms. Pei Ling will be tried in the Shushan District Court on the afternoon of July 27, 2022.

Since July 12, 2022, officers from Jilin City police departments and stations have been harassing practitioners in their jurisdictions. They repeatedly intimidate practitioners, ransack their homes, photograph them, force them to sign guarantee statements renouncing Falun Gong, and arrest them.

Officers went to Mr. Li Shigang’s home. When they did not see him, they arrested his wife as a hostage and threatened her to make her disclose his whereabouts.

Ms. Xu, 71, Mr. Wang Peng’s mother, was arrested for giving people Falun Gong materials. She was taken to the Caiyudajie Police Station. Her home was ransacked. She was forced to leave home to avoid further persecution after she was released.

On July 20, 2022, Jingyue Police Department officers went to Mr. Wang’s home to find him, but he was not there. They ransacked the place and seized dozens of Falun Gong books, a picture of Falun Gong’s founder, a notebook computer, and other items. Caiyudajie Police Station officers joined them. Together, they arrested Mr. Wang, his wife Ms. Zhang Yufen, and their guest, practitioner Piao Yingshun, and took them to the police station.

Ms. Zhang and Piao were given 15 days of criminal detention. They were released because of the pandemic. Mr. Wang was detained in an unknown detention center.

The Shenmu City Police Department notified Mr. Li Xupeng, Mr. Wu Xiaojun, Mr. Gao Xiaoke, Mr. Chen Guangchang, and Ms. Li Fanli around March 25, 2022, that their bail periods had ended. But the police still refuse to return the items confiscated from them, including several cell phones, computers, a car, printers, over 100 Falun Gong books, and so on.

Practitioner Yang, first name unknown, was arrested in Hasaer Square around 2:00 p.m. on July 23, 2022, for talking to people about the persecution of Falun Gong. Yang was with his or her grandson.

Mr. Wang Liangsheng and his wife Ms. Lai Zhongping were reported to the police by villagers on the evening of July 7, 2022, when they were distributing Falun Gong flyers in Anyue County. Local police station officers arrested them the next day, ransacked their home, and detained the couple for 15 days. At the end of the 15 days, they were released to officers from the Shengli Police Station and members of their residential committee.

Mr. Liu Yantao, 35, was arrested by plainclothes officers on the afternoon of July 18, 2022. They’d called him repeatedly before that. His phone was monitored and his calls were recorded.

Ms. Qing Lieyun of Guanghan City, Sichuan Province, went to her daughter’s home in Guiyang City this year. Her phone might be being monitored. She and her daughter were arrested in Guiyang City when they were talking to people about the persecution of Falun Gong. Her daughter was released. Ms. Qing is still detained and her family is not allowed to see her.

Su Qing’s daughter recently found a refund from the Chaoyang City Women’s Detention Center on her bank card. She called the detention center and learned that her mother was transferred to a prison in Shenyang City on June 24, 2022, but she was not told which prison. The family has not received any notification.

Zhang Kunshan was sentenced to seven years in prison. Zhang appealed. The Chaoyang City Intermediate Court held a virtual hearing on July 13, 2022. The decision is not yet available.

Mr. Ji Ruiling of the Hanshan District was arrested at home at noon on July 18, 2022. He is being held in the Handan City No. 2 Detention Center.

Mr. Jiao Bingnan was released from Weinan Prison on July 10, 2022, after serving three years. He was arrested on July 10, 2019, while reading Falun Gong books with eight other practitioners. The Qishan County Court sentenced him to three years with a 6,000-yuan fine on November 20, 2020. He appealed to the Baoji City Intermediate Court, which ruled to uphold the original verdict. The court froze the bank account that his family used to receive the agricultural subsidy.

At the time this report was written, many practitioners, including Zhang Peng, Wang Yuchao, Zang Jinda, Ma Haipeng, Cao Huashan, Song Zhi, Shen Hongqi, and Liu Hongshu, were still being held in Weinan Prison. This prison, mainly for felons, has been used to incarcerate male Falun Gong practitioners in Shaanxi Prison. Those practitioners who refuse to renounce Falun Gong are held in the 16th ward, where they are subjected to intensified torture and denied family visits.

Mr. Liu Kaisheng, Ms. Li Shifang, Ms. Dai Qunyin, and Ms. Jian Hongmei were arrested on August 16, 2020, for talking to people about Falun Gong. They were sentenced to prison in the Hejiang County Court on October 8, 2021. They appealed the verdicts, but the Luzhou City Intermediate Court ruled to uphold their original verdicts on December 29, 2021.10_Accounts_of_Persecution

Mr. Liu, a 48-year-old senior engineer, was recently taken to Jiazhou Prison. Ms. Dai and Ms. Li were transferred to the Sichuan Province Women's Prison on June 15, 2022. At this time it's not clear if Ms. Jian is still in the detention center or has been incarcerated.