(Minghui.org) After a round of applause at the Politeama Rossetti in Trieste, Italy, on June 30, the New York-based Shen Yun Performing Arts concluded its 2022 European tour. 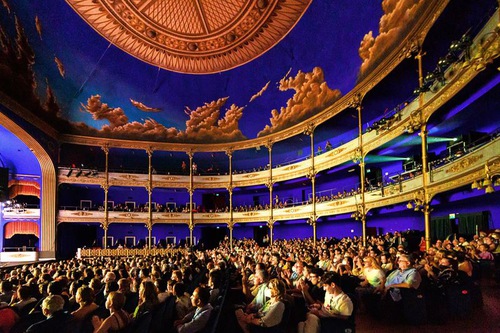 The Shen Yun New York Company at the Politeama Rossetti in Trieste, Italy, on June 30. The company presented three performances in Trieste June 28–30, all to packed houses. (The Epoch Times) 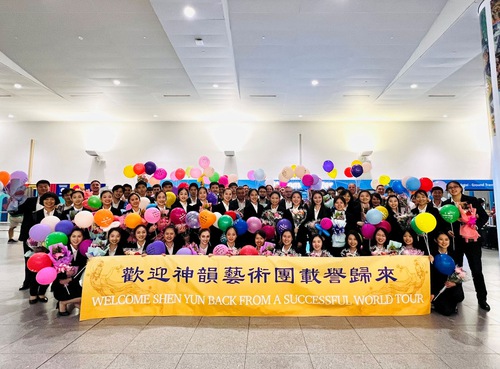 The Shen Yun New York Company returned to New York on July 2. Performers were welcomed by fans with flowers and balloons at the airport. (The Epoch Times)

“Every show was a packed house even though the pandemic wasn’t completely over. The number of audience members far exceeded what we imagined. The audiences were very enthusiastic. This was a very big encouragement for us,” said Piotr Huang, another principal dancer with the Shen Yun New York Company.

“Shen Yun Can Touch The Soul” 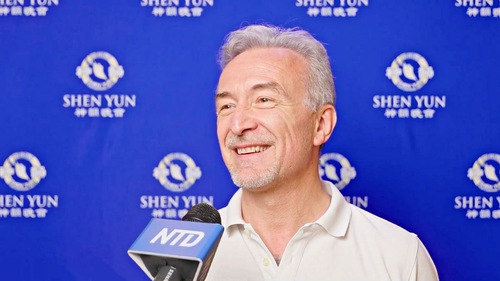 “I gained a lot after watching Shen Yun. I used to be a dancer and a gymnast, so I could understand Shen Yun’s perfect execution of movements and complete preparation of techniques,” Mr. Mazza said.

“The performance had a kind of message that our dance performances are not able to express. This message is very hard to explain. It is something from the inside and not just on the outside. Nowadays many dances are only a display of the outside. But Shen Yun can touch the soul and stay deep in people’s hearts. Shen Yun fused together many things, very harmonious.

“I want to express to Shen Yun artists the highest congratulations. They must continue. I know they’re in a very touch situation, but I know they have the strength to continue forward,” he said. 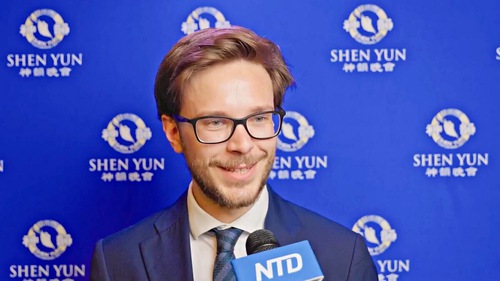 “The performance was truly captivating! I wasn’t familiar with this art troupe before. The performance made me feel emotional. The synchronicity of the performers and the various combinations of the colors were all very fascinating,” he said.

“What also left me a deep impression was that Chinese culture is reallyfascinating. Shen Yun excellently displayed such traditional and important things through exquisite artistic skills... The beautiful tradition and culture of China are clearly something we should learn from,” he said.

“Brought Great Serenity to My Heart” 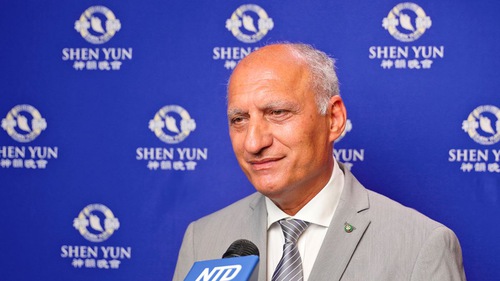 Francesco Panteca at the Shen Yun performance in Trieste on June 29. (NTD Television)

Francesco Panteca, the President of the City Council of Trieste, saw Shen Yun in Trieste on June 29.

“The artistic skills of the performance are without a question superb and excellent. All these classical Chinese dance, everything, and the discipline of the performers are outstanding. For Shen Yun artists, people have nothing but compliments,” Mr. Panteca said.

“I think reviving traditions is a great mission. This mission of Shen Yun made us understand what real China is; it is not the China after communism.

“The show brought great serenity to my heart. The Creator came to the earth and brought us peace. Not just the last scene, but everything about the show touched me. The program has a variety of content that they’re not the same as each other, but they all present China. Those traditional cultures during the periods of emperors in ancient times in China touch the deep part of the heart,” he said.

“Hope for a Beautiful Future” 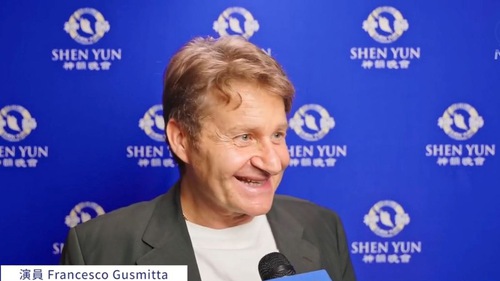 Francesco Gusmitta at the Shen Yun performance in Trieste on June 28. (NTD Television)

“The performance made me feel a light. This is energy. I saw that performers on stage were using their soul to perform. I can feel their faith. They expressed this faith. A kind of faith that goes beyond material and allows people to elevate,” Mr. Gusmitta said.

He was especially impressed by the display of divinity in the performance. “Gorgeous! This is something that’s hard to find in theater performances. It’s hard to find even in the entire world. Shen Yun is like the light of messenger. One very important thing was to restore the eulogy of the heavenly world on stage,” he said.

After seeing the performance, “I felt that I grew wings and began to fly. I also went to [the heavenly world]. So beautiful... Hope for a beautiful future. Thank you Shen Yun,” he said. 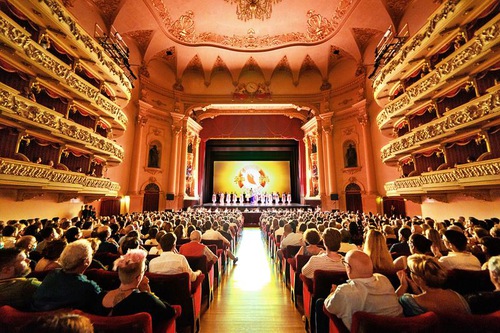 The Shen Yun New York Company at the Teatro Filarmonico in Verona, Italy, on June 26. The performers took three bows. The company presented two performances in Verona on June 25 and 26, both to packed houses. (The Epoch Times)

“A Magnificent and Glorious Display of Art” 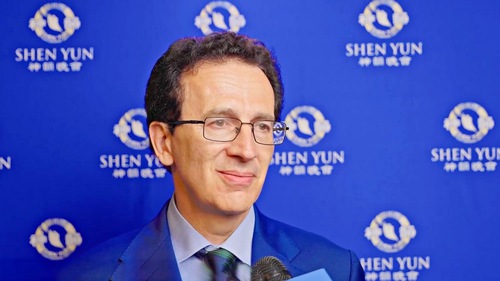 Antonio Stango at the Shen Yun performance in Verona on June 25. (NTD Television)

Antonio Stango, the president of the Italian Federation for Human Rights, saw Shen Yun in Verona on June 25.

“The performance was exciting! A magnificent and glorious display of art. The performers were highly skilled and their professionalism was extraordinary. Enjoying the performance felt like a breath of long history blown toward you,” Mr. Stango said.

“I very much admire the artistic achievement of the performance, the exquisite production, and the persevering spirit. This can be seen in the wholehearted dedication of the dancers... I think, everyone of us should come enjoy Shen Yun with great respect,” he said. 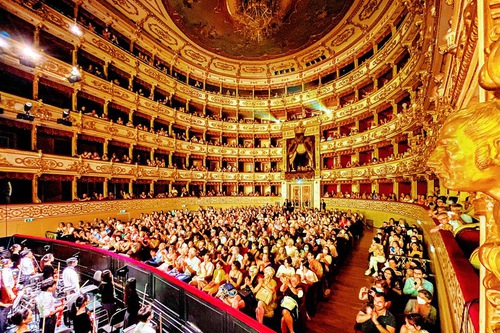 The Shen Yun New York Company at the Teatro Regio in Parma, Italy, on June 23. The performers took two bows. The company presented three performances in Parma June 21–23, all to packed houses. (The Epoch Times) 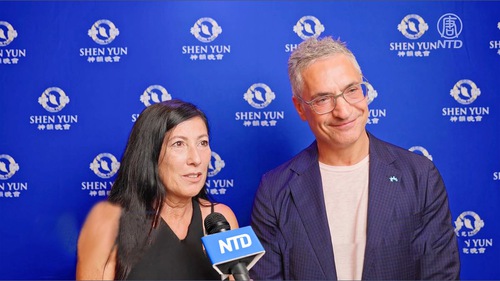 Sergio Di Nuzzo, a dermatologist and a professor at the University of Parma, saw Shen Yun with Cristina Gabba in Parma on June 21.

“The show was truly outstanding. It allowed us to be immersed in Chinese culture in all respects. I really like the beautiful costumes in the performance. The dancers were very skilled. The performance told stories from the past to the present,” Mr. Di Nuzzo said.

“The message delivered by the performance, a strong message, which was clearly telling us that it is the human heart that created limits for ourselves. I have deep feelings regarding this, because we were supposed to develop toward good with other people and return to the divine world, where we originated from, just like what the performance told us. But unfortunately we did not do well. The performance is so great. It really is very touching,” he said.

Ms. Gabba agreed. “Yes, Shen Yun’s mission is very important. It’s very powerful. We have to support them. Let the resounding voice of Shen Yun be heard by people!” she said.