(Minghui.org) While I was still a university student, I gave a flyer to a classmate. He asked in surprise as he read through the flyer, “Why are there so many on-lookers?!” 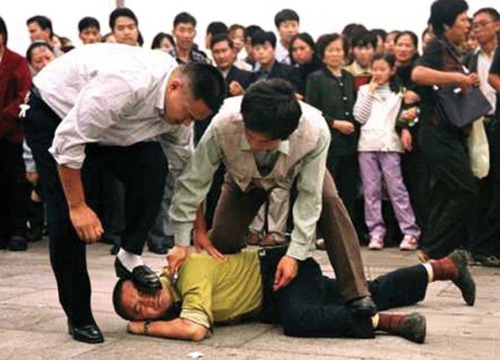 What really surprised my classmate was that the practitioner was bleeding, but no one stepped forward to help him, and there were even people in the crowd who appeared to enjoy watching what was going on.

I used to think that it was good enough for people to accept flyers from Falun Gong practitioners like me and read about the persecution in China.

However, my classmate’s reaction made me realize for the first time just how much the Chinese Communist Party (CCP) has brainwashed people through its various political “movements,” and as a result, the majority of the Chinese people have learned to side with the CCP regime to avoid becoming its target, and such an attitude degrades human nature.

It was written in Nine Commentaries on the Communist Party,“Every struggle and movement served as an exercise in terror, so that the Chinese people trembled in their hearts, submitted to the terror and gradually became enslaved under the CCP’s control.”

Some people may say, “Well, it’s okay as long as we have money to spend!”

However, what really surprises me is that nowadays most people have lost even the most basic sympathy for others.

Recently, I saw a post on YouTube, saying that Falun Gong people have only themselves to blame for their persecution. Most follow-up comments agreed.Mencius said: “All men have a sense of sympathy.” Then, what has taken away such sympathy in people?

Killing is wrong in itself, but for so many years, Falun Gong practitioners have had to try very hard to convince people that it is wrong for the CCP to torture and kill innocent people for their faith. In other words, people’s mindset seems to have deteriorated so much that they even agree with the CCP’s killing of anyone it deems to be the enemy.

The Nine Commentaries on the Communist Party pointed out, “Inciting the masses to struggle against each other is a classic trick of the CCP. The CCP created the 95-5 formula of class assignment: 95 percent of the population would be designated as members of various classes that could be won over, while the remaining 5 percent would be designated as class enemies. People within the 95 percent were safe, but those within the 5 percent were “struggled against.”

“Out of fear, people strive to be included in the 95 percent. This resulted in many cases in which people turned on others, adding to the persecution. … Since killing is to create terror, then it does not need any justification as to whom to kill.”

During the previous political movements, because it was impossible to predict whether disasters would fall on oneself, people would try to take the “right” side and make sure their own life was safe and good. However, when human nature is replaced by the “Party” nature, the way people behave can be quite shocking.

For example, during the lockdowns in Xi’an City, Shaanxi Province, in China, a hospital refused to accept an 8-month pregnant woman simply because her negative COVID-19 test result would expire in a few hours. This led to a miscarriage and the death of her unborn child.

On another occasion, a different hospital refused to treat a patient for a heart attack even though the patient had a valid COVID test result, because he came from a “medium-risk area.” He arrived at the hospital at 2:00 p.m., but was not given any treatment until his condition turned critical after 10:00 p.m. Due to the long delay, the man passed away.

In Xuzhou City, Jiangsu Province, an 18-month-old baby choked on something stuck in his throat and was rushed to Cuining County Hospital for treatment. The doctor required the baby to do a PCR test first, without giving him any treatment for seven or eight hours, waiting for the test result. When the results finally came, the hospital told the parents to take their baby to a hospital in Xuzhou City, by which time it was too late and the baby had died.

There have been many other cases in which very little sympathy was shown in treating people in great need of help, because those in charge choose to follow the orders of Party authorities regardless of patient need. Compassion seems to be very rarely shown.

If everyone in China regards the Party above all else, with little concern for human nature and conscience, then what will become of it in a few more generations down the road?

Maybe one day Falun Gong will be redressed, but another persecution could well be launched in its place. Communism requires some group to “struggle against” after all. Who will be next?Yes, wealth is important in our daily life, but when it comes to life and death issues and people still say, “I couldn’t care less as long as I have money,” I feel very sorry and sad.

I sincerely hope that those who have lost their way due to the brainwashing, the deception and violence of the Party, can rekindle the little bit of remaining kindness they were born with.