(Minghui.org) Falun Dafa practitioners gathered in front of the Taipei City Hall on the evening of July 16, 2022. They sat side by side holding candles to solemnly commemorate the practitioners who passed away as a result of the persecution. The CCP (Chinese Communist Party) began persecuting the spiritual practice in China 23 years ago, on July 20, 1999.

Many dignitaries joined the event to show their support for practitioners’ efforts to end the persecution. They were Tseng Chien-yuan, chairman of the board of New School for Democracy; legislator Chen Jiau-hua; Lan Shih-po, chapter head of Taiwan Statebuilding Party; and members of the Taipei City Council: Chiang Chih-ming, Hung Chien-yi, Hsu Li-hsin, Hsu Hung-ting, and Chang Mao-nan. 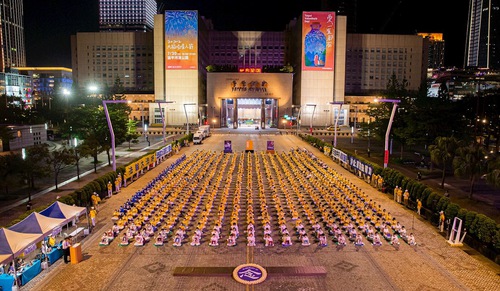 Falun Dafa practitioners held a candlelight vigil in front of the Taipei City Hall on July 16, 2022, to call attention to the ongoing persecution in China. 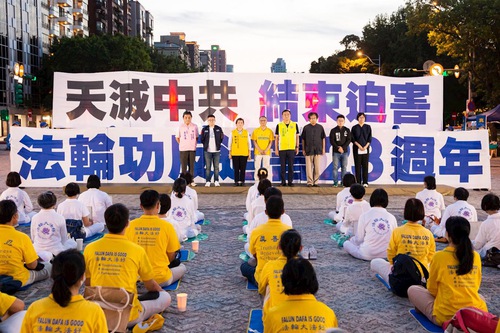 Dignitaries joined the rally to show their support for practitioners’ efforts to end the persecution in China.

Call to Support Falun Dafa and End the Persecution

Professor Hsiao Sung-shan, president of the Falun Dafa Association in Taiwan, said, “This unprecedented evil has gone on for 23 years. The Chinese regime continues to harvest organs from practitioners incarcerated for their faith while they are alive, and sell them for transplants.” 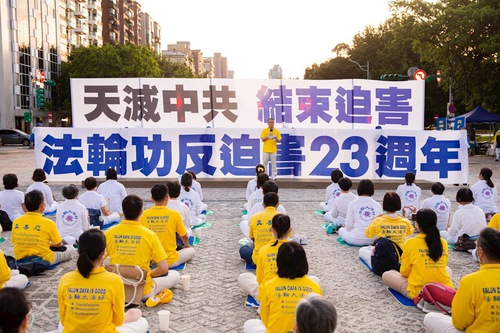 Professor Hsiao pointed out, “The Chinese Communist Party (CCP) does not represent China. The vast majority of the Chinese people are victims of the CCP’s tyranny. We ask people from all walks of life to have the courage to show their support, and to condemn and help stop the persecution.”

Grateful for Practitioners’ Kindness and Persistence 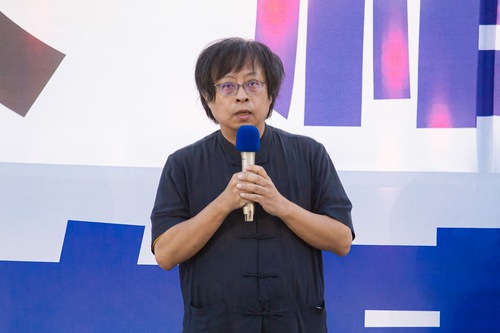 Tseng Chien-yuan, chairman of the board of New School for Democracy, said, “Under the CCP’s reign, the concept of human rights does not exist. We will hold former Chinese leader Jiang Zemin, who launched the persecution, responsible legally and historically.”

Mr. Tseng said that everyone should pay attention to those persecuted by the CCP, and encourage more just people to stand up and say no to the CCP. In the end, he thanked practitioners for staying kind and persistent in times of hardship.

Everyone Should Condemn the Persecution 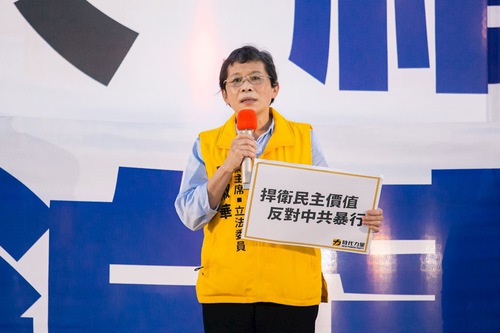 The CCP Is a Threat to the World 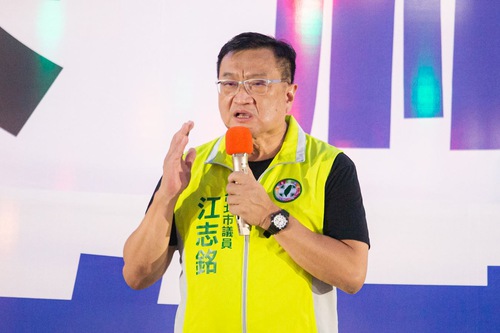 Chiang Chih-ming, Taipei City Councilor, called on the CCP to stop persecuting kind Falun Dafa practitioners. “Jiang Zemin claimed that he would eradicate Falun Dafa in three months when the persecution started. Not only did that not happen, but more and more people around the world also embrace Dafa,” he said. “Practitioners are not alone. Many people support you from their hearts. The world knows that the CCP is a wicked regime and a threat to the world.”

In the end, Mr. Chiang said that the world would not tolerate the CCP’s systematically harvesting organs from living practitioners incarcerated for not renouncing their faith. “Only when the CCP collapses will the world enjoy real freedom of belief and peace.”

Universal Values Have No Borders 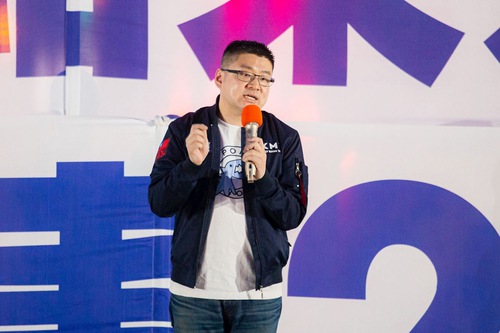 Taipei City Councilor Hsu Hung-ting spoke out against weaponizing political power to persecute people. “I am also against commercializing organ transplants and harvesting organs from prisoners of conscience,” he said. He believes that so many people gathered today because there are no borders when it comes to having a sense of justice and being kind. He said, “Let’s keep fighting and support Falun Dafa practitioners’ efforts.” 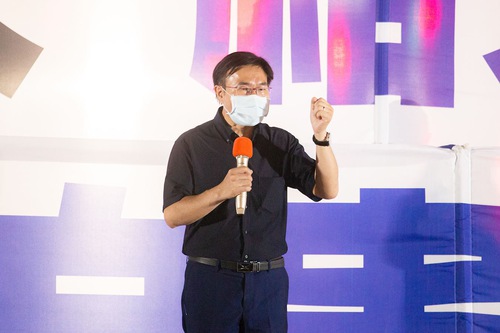 Chang Mao-nan speaks at the rally.

Chang Mao-nan, Taipei City Councilor, said that he saw bravery in practitioners, and he’d never stop supporting them, “Live organ harvesting is nothing new in China. We want to redress Falun Gong and demand justice for them.” He hopes that everyone can, “Walk the path of justice fearlessly like Falun Dafa practitioners do.” 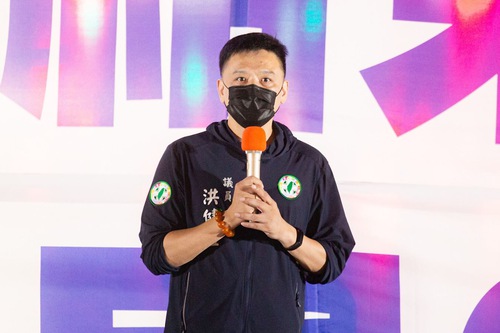 Hung Chien-yi speaks at the rally.

City Councilor Hung Chien-yi bowed to practitioners and said that without their persistence, “We would not come this far on the path (of ending the persecution).”

He said that over 4,800 practitioners have died as a result of torture during the 23-year-long persecution. “Such tragedy should be made known to the world as July 20 approaches so the world knows how the CCP persecutes Falun Dafa,” he said. “I will support practitioners wholeheartedly.” 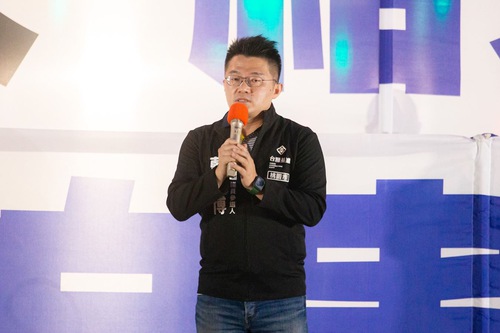 Lan Shih-po speaks at the rally.

Lan Shih-po, head of Taoyuan Chapter of the Taiwan Statebuilding Party, said that he’s seen how practitioners fend off the CCP’s threats with their belief in Truthfulness, Compassion, and Forbearance. He thanked practitioners for guarding these universal values selflessly so that everyone could enjoy freedom of belief. 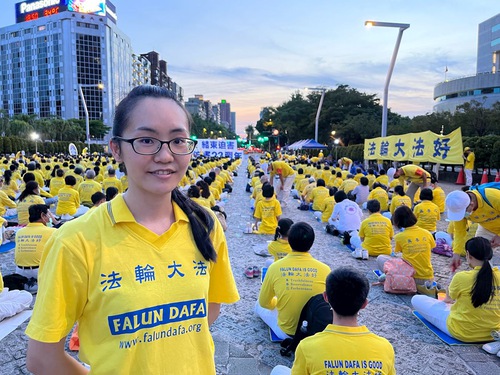 After Ms. Li Ying-hsuan did Falun Dafa’s meditation exercise her pain and illness disappeared. She decided to begin practicing. She also experienced how things could change for the better once she adjusted her attitude and thoughts based on Falun Dafa’s teachings. She began to look at things in a positive light. “Once you experience the amazing results, you won’t want to stop practicing. Such a great practice is banned in China, and practitioners risk their lives to be good people. We want to end the persecution. As long as it continues, practitioners will keep exposing the CCP’s evil nature.” 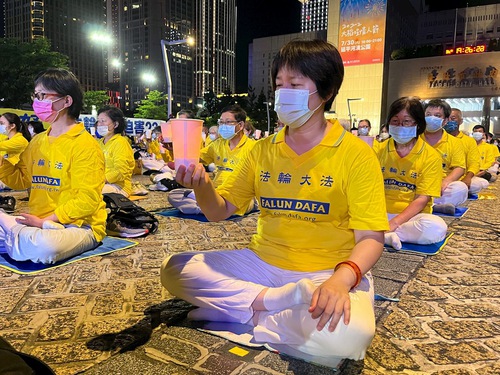 Ms. Yang Ya-chuan said she began practicing Falun Dafa in 2021. She used to suffer from various illnesses, and told her family, “Even if I only have three months to live, I will practice until the last minute.” She not only lived but became illness-free. Her family was happy, and she had an outstanding performance at work as a salesperson.

She said that practitioners in China face life and death situations every day. Ms. Yang wants them to know that people outside of China support them. “I believe what we do is right, and it is our responsibility to continue exposing this persecution.”