(Minghui.org) After taking three bows at the sold-out performance in Taipei on July 10, 2022, the Shen Yun International Company’s 28-show, seven-city Taiwan tour came to a conclusion. 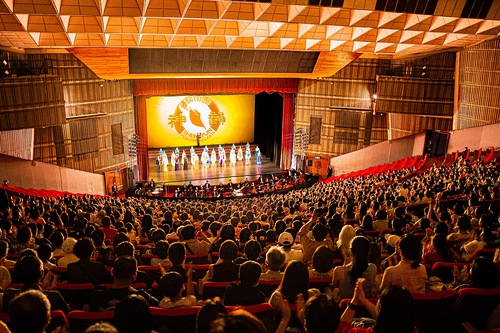 The Shen Yun International Company at the sold-out performance at the National Dr. Sun Yat-sen Memorial Hall in Taipei on July 10. The performers took three bows after the performance.

“Each of Us Can Relate to Shen Yun” 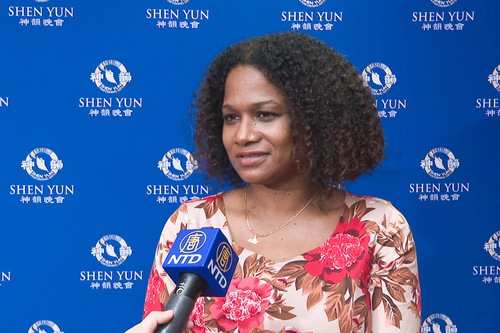 Candice Augusta Pitts at the Shen Yun performance in Taipei on July 8.

Ms. Pitts also said she learned more about the treasures of classical Chinese dance and Chinese traditional culture. She also enjoyed the unique backdrop which interacted with dancers’ movements and vividly combined the virtual and real.

“You won’t know what you missed in your life if you haven’t seen [Shen Yun]... The show brings people beautiful art, vitality, and happiness, as well as humankind’s universal values. Each of us can relate to Shen Yun,” she said. 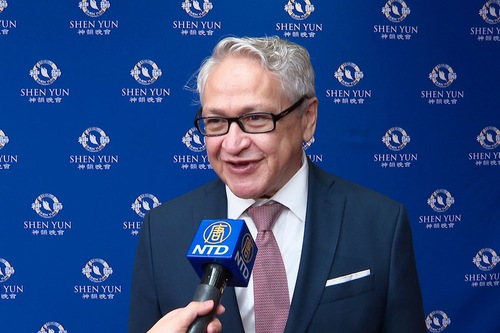 Miguel Magalhães at the Shen Yun performance in Taipei on July 8.

Miguel Magalhães, director of the Commercial Office of Brazil in Taiwan, saw Shen Yun with his wife in Taipei on the evening of July 8.

“This is the most fascinating show I have seen in Taiwan. I’m very happy now. All Shen Yun programs are impressive. I enjoyed every moment!” Mr. Magalhães said.

He said good arts can bring people hope and Shen Yun is good in culture, art, color, and all the other aspects.

“A Visual and Auditory Feast” 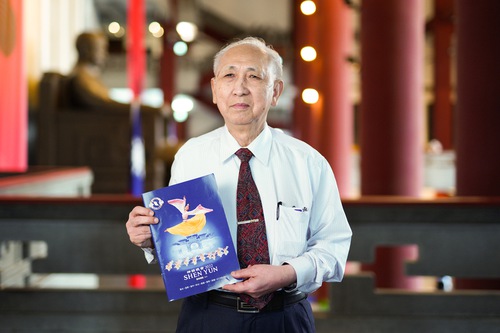 Hung Chi-I at the Shen Yun performance in Taipei on July 8.

Calligrapher Hung Chi-I saw Shen Yun in Taipei on the afternoon of July 8.

“The performance is grand. I can’t even find a word to describe it. I feel moved and cheerful,” said Mr. Hung, who is well-known in both Taiwan and Mainland China.

“Shen Yun presents the good parts of China’s 5000 years of culture. It’s a visual and auditory feast we Taiwanese people are very lucky to enjoy,” he said.

“This Should Be Seen by Everyone in the World” 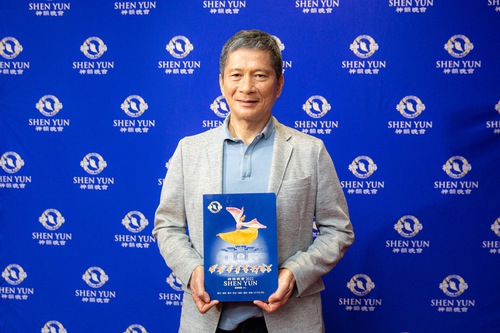 Lee Yung-te at the Shen Yun performance in Taipei on July 9.

Lee Yung-te, Taiwan’s Minister of Culture, saw Shen Yun in Taipei on the evening of July 9.

“Very high-level artistic performance. It also displays freedom of creativity. This should be seen by everyone in the world,” Mr. Lee said.

“Using dance to tell stories, it was choreographed very very beautifully. The costume design, the digital backdrop, everything worked together very well. It is a perfect performance!” he said.

What left him the deepest impression was the dance drama portraying the communist regime’s ongoing persecution of Falun Gong. “I feel very touched. This is very hard to imagine in the free world... Under an authoritarian regime, the freedoms of people’s faith, thoughts, etc. are all limited and persecuted. But [faith in the divine] is a universal value that people should care about together,” he said.

Lastly, he expressed that Shen Yun is bringing the entire globe positive energy and hope by persisting to perform everywhere during this last period of the pandemic. “The positive power is good for the entire society!” he said. 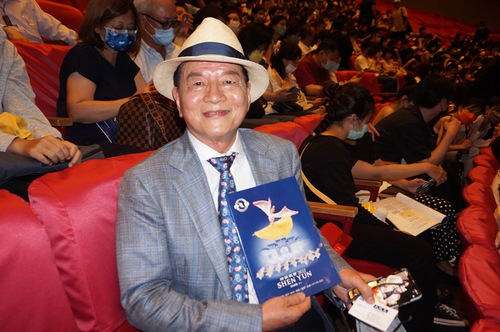 Cheng Hsueh-chih at the Shen Yun performance in Taipei on July 9.

Cheng Hsueh-chih, the president of a fashion accessories store, saw Shen Yun in Taipei on the evening of July 9.

“Shen Yun’s performance is absolutely excellent. It looked like a colorful butterfly when they danced; and a butterfly-looking flower when they stopped. It looks easy but it’s not. It felt like time was fleeting. A performance of over two hours feels like experiencing a glorious journey of five thousand years of divinely-inspired culture. The profundity and meaningful content of Shen Yun let me obtain memories that I will never forget for the rest of my life,” Mr. Cheng said.

“I appreciate and admire how Shen Yun uses dance and artistic forms to educate the next generations. Our five thousand years of culture have to be passed down and cannot be interrupted. Shen Yun promotes the culture far and wide, which makes me very moved,” he said. 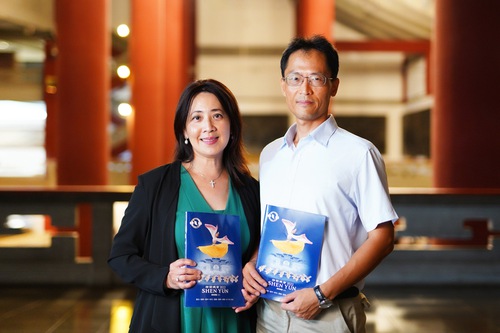 Joanne Ou, spokesperson of Taiwan’s Ministry of Foreign Affairs, and her husbandPan Kuo-long, a professor of mechanical engineering at the National Taiwan University, saw Shen Yun in Taipei on the evening of July 9.

“No Wonder Every Show Is a Full House” 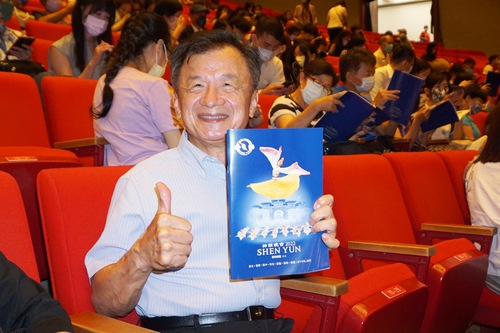 Chiu Tai-san at the Shen Yun performance in Taipei on July 9.

Chiu Tai-san, the Minister of Mainland Affairs Council, saw Shen Yun in Taipei on the evening of July 9.

“Shen Yun Performing Arts is truly exceedingly high-skilled. Very stunning. It’s excellent every time they come to perform. No wonder every show is a full house,” he said.

“I Will Definitely Come Back” 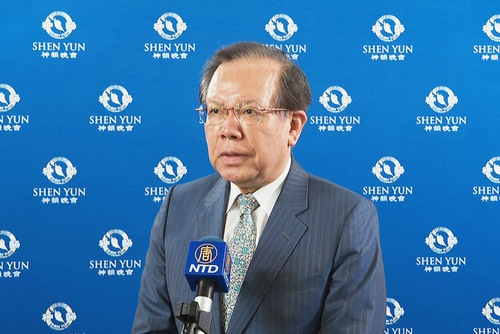 Yen Ching-chang at the Shen Yun performance in Taipei on July 10.

“I will definitely come back to enjoy it!... I believe Shen Yun’s performance each time has many different meaningful contents,” Mr. Yen Ching-chang said.

“A show so beautiful like Shen Yun that promotes Chinese culture that was accumulated for five thousand years in principle should make China feel very proud,” he said.

Mr. Yen said that Shen Yun has been receiving very high accolades everywhere in the world, but it cannot perform in China. “This makes me feel very regretful,” he said.

“I hope Shen Yun uses the power of artistic performances, a soft power, to make everyone feel that art itself can inspire the progress of human thinking, and also motivate us to pursue values of kindness and compassion,” he said. 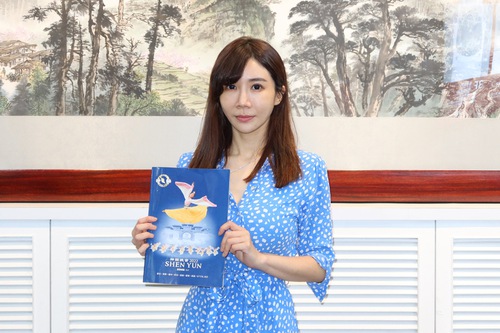 Liao Hsueh-chun at the Shen Yun performance in Taipei on July 10.

Liao Hsueh-chun, an award-winning stylist and the co-chair of a hair salon chain, saw Shen Yun in Taipei on July 10.

“What was delivered to me was their truthfulness and compassion. I feel that they’re very sincere, every single one of the performers,” Ms. Liao said.

She spoke about the piece portraying a story about two restaurants. “[The story] also made me very moved. Even though the two of them would fight for customers in order to compete, when things happen, they would put down the competition and demonstrate kindness – whenever you have problems, I would help you and help you selflessly. And then everyone is one family,” she said.

Ms. Liao also enjoyed the soprano’s bel canto performance and shared her feelings. “I feel that every one of us was born with a mission. No matter how wealthy or powerful you are, you have a mission,” she said.

“When I saw the light in the last scene, I felt that it was just like what the lyrics said: the divine has actually been around us the entire time!

“I hope everyone can feel it, and together walk on a compassionate and correct path,” she said.

Shen Yun has visited Taiwan for 14 seasons but had never performed in Miaoli County. On July 5, the Miaobei Art Center was filled with flowers as county magistrates, mayors, and legislators from Miaoli and a nearby county and city welcomed Shen Yun with floral arrangements. 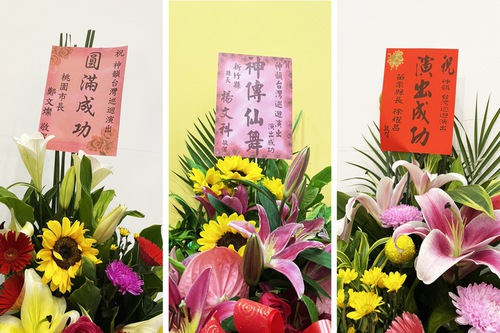 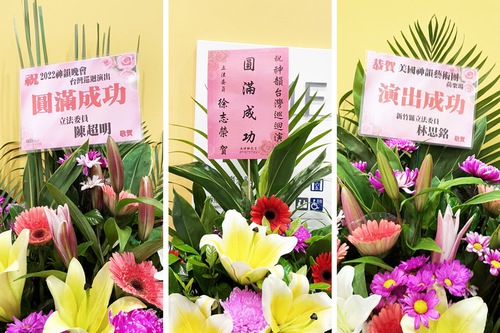 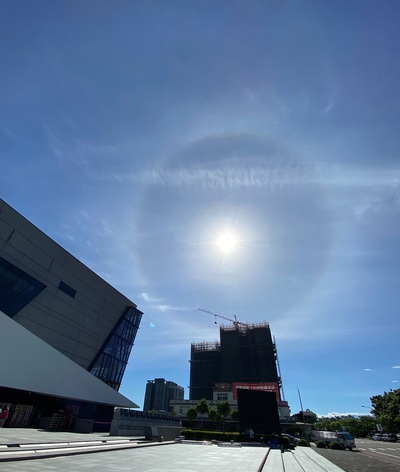 At around 8am on July 5, the first day of Shen Yun’s performances in Miaoli County, local residents noticed above the Miaobei Art Center a large halo around the sun and a strip of clouds across the halo, which they thought resembled a dragon. The resident who provided the photo thought that “Shen Yun’s super positive energy made an auspicious dragon come offer blessings.” This solar halo lasted two hours. 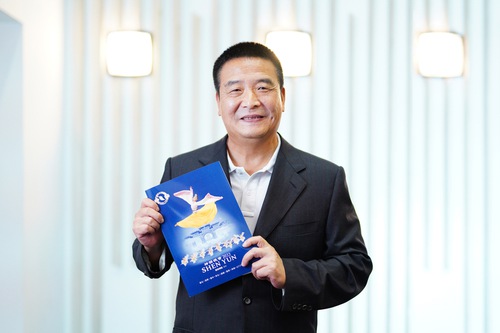 Hsu Ting-chen at the Shen Yun performance in Miaoli on July 5.

Hsu Ting-chen, a political consultant at the Taiwanese Executive Yuan, saw Shen Yun in Miaoli on the evening of July 5.

“[Shen Yun] is very moving... We enjoyed the music, dance, and the digital backdrop—it’s a fabulous performance!” Mr. Hsu said.

He said that Chinese culture is profound, and people are proud of it. Shen Yun is reviving Chinese culture, which awakens people to keep their faith in the divine and follow traditional values.

“It Is a Very Precious Opportunity” 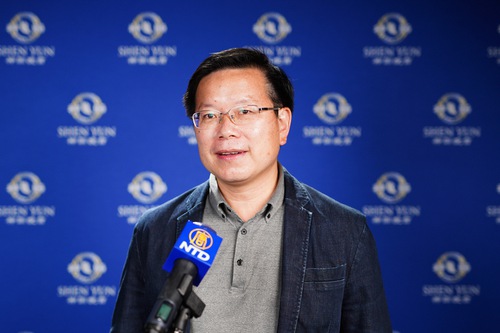 Lin Yen-fu at the Shen Yun performance in Miaoli on July 5.

Lin Yen-fu, the Director-general of Miaoli County’s International Culture and Tourism Bureau, saw Shen Yun in Miaoli on the evening of July 5.

“This was not only a dance performance. It also had music, modern animation, 3-D visual arts... Shen Yun has seven troupes touring the world. It is a very precious opportunity... What left me the deepest impression was the backdrop in the back and how it cooperated with [the performers]. Very refreshing,” Mr. Lin said.

“A Display of Techniques That Are Rarely Seen” 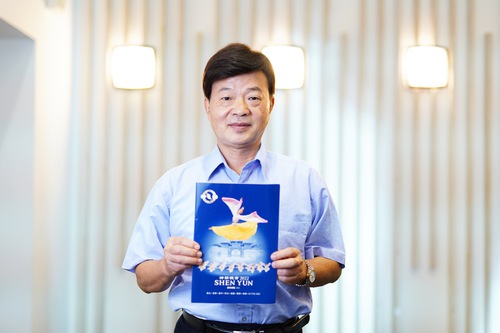 Lai Chang-hsiu at the Shen Yun performance in Miaoli on July 5.

“The dances [of Shen Yun] display techniques that are rarely seen in the world. The stories the performers are telling are very inspiring,” Mr. Lai said.

He said that he was uplifted by Shen Yun: “The nature of human beings is to be kind. We should not have too many desires. We should use this chance to reflect on ourselves.”

“Finding Opportunities to Save People During the Pandemic”

“Couple in Their 80s Put on Probation for Practicing Falun Gong”