(Minghui.org) The Institute for Research in Economic and Fiscal Issues (IREF Europe), a think tank based in Paris, published an article on July 4 highlighting the state-sanctioned forced organ harvesting in China. Titled “Organ harvesting in China or the criminal business of a dictatorship,” the article warned that it is time for the Western countries to wake up and face reality of the atrocity. 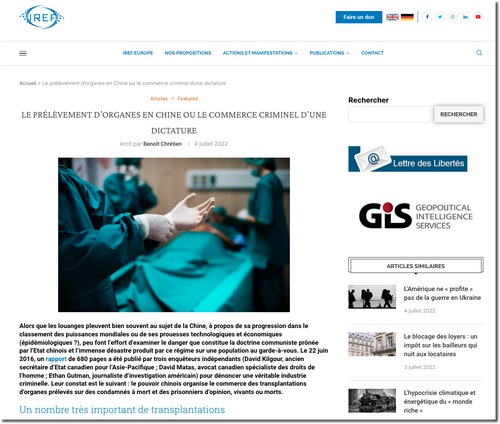 The article wrote that many people praised China for its growing world prowess or its technological and economic progress, but that few paid attention to the danger posed by communist doctrine, not to mention the disasters the Chinese Communist Party (CCP) has brought upon the citizens of China over its 60+ years of bloody rule.

According to the article, ample evidence has been collected by investigators and documented in Bloody Harvest: Organ Harvesting of Falun Gong Practitioners in China (2009, by David Matas and David Kilgour) as well as The Slaughter: Mass Killings, Organ Harvesting, and China's Secret Solution to Its Dissident Problem (2014, by Ethan Gutmann).

Matas, Kilgour, and Gutmann provided an updated report in June 2016. “The source for most of the massive volume of organs for transplants is the killing of innocents: Uyghurs, Tibetans, House Christians and primarily, practitioners of the spiritually based set of exercises Falun Gong,” wrote the authors in the 680-page report, “Organ pillaging in China is a crime in which the Communist Party, State institutions, the health system, hospitals and the transplant profession are all complicit.”

According to Chinese tradition, a person’s body should remain intact after death, which was one of the major reasons that China did not have any official organ donation registration system until 2013, seven years after the scandal of forced organ harvesting was initially exposed in 2006. The IREF article also explains that very few organs were voluntarily donated after the system was put in place.

Another evidence came from the waiting time for organs. In other countries it is sometimes necessary to wait several years for an organ donation, “China boasts of record-short delays, only a few weeks, for liver or kidney transplants. Coming,” the IREF article continued, “Moreover, organ compatibility is a crucial issue that can only be hoped for, never guaranteed unless... in a Chinese hospital.”

The IREF article noted that many hospitals in China have done organ transplants. A doctor at Changzheng Hospital in Pudong Campus, Shanghai said, “We have several shifts working 24 hours a day. We have four teams that can do [transplants].” Regarding the source of donor organs, he replied, “We [use] a unified national source. This, how do we say this…only doctors know.” In addition, when rejection occurred, the teams may make several other attempts on the same patient, until success is assured.

This is even more puzzling given the very limited organ donation. China officially announced in 2015 that it would stop using the organs of death-row prisoners, after facing heavy criticism from many countries and international organizations.

“So where do the organs come from? The answer to this question is chilling,” the IREF article wrote, “The rapid growth in transplants since 1999 comes from massive and brutal repression by the authorities against the followers of Falun Gong, a practice of meditation based on traditions of health and personal development.”

This started in 1999 when then CCP leader Jiang Zemin decided to start persecuting Falun Gong with the policy to “defame their reputations, bankrupt them financially, and destroy them physically.” Under the directives of the 610 Office, an extralegal agency established on June 10, 1999 and tasked with carrying out the persecution policy, around 70 million practitioners have been subjected to arrest, detention, and torture since then.

The European Parliament adopted a resolution on May 5 this year about the organ harvesting in China from detainees of numerous minority groups. “The Chinese regime obviously denies any access to detention centers and medical establishments. The international community is silent,” concluded the IREF article, “No doubt it is time for Western worshipers of Chinese power to open their eyes to the reality of this deadly communist ideology.”

“Visby, Sweden: Practitioners Raise Awareness of the Persecution of Falun Gong in China”