(Minghui.org) Today's news from China includes incidents of persecution that took place in 17 cities or counties in 13 provinces, where at least 32 practitioners were recently persecuted for their belief. 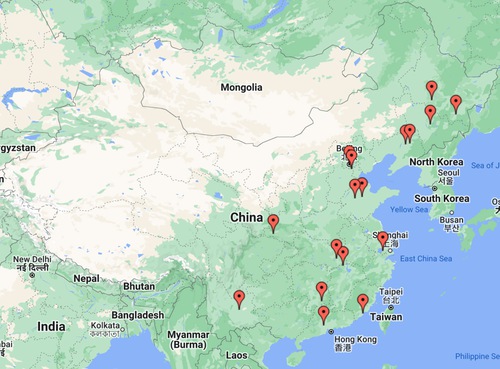 Officers from the Ruichang City Police Department broke into Ms. Tong Yinping’s home in Yongquan Township, Chaisang District, Jiujiang City, on June 16, 2022. They smashed open the steel outer door and the inner door of her home, and ransacked the place. They arrested her and her younger sister Ms. Tong Jinping. The two practitioners were taken to the Domestic Security Division of the Ruichang City Police Department.

On the same day, practitioner Li from Yongquan Township was also arrested at work. Li’s home was ransacked. Further information is pending.

Ms. Chen Wanqiu, Ms. Wang Xiuxia, and Ms. Wang Yali were tried via video link by the Daoli District Court on the afternoon of June 17, 2022. No verdicts were announced.

Mr. Liu Chao, in his 30s, was arrested and his home was ransacked by officers from the Shangcheng Police Station on the morning of June 15, 2022. Further information is pending.

Officers from the Tiexi District Domestic Security Division and the Baogong Police Station coaxed Ms. Liu Yuqin into going to the police station on May 15, 2022 on the pretext that she had close contact with someone who tested positive for COVID and had to take a nucleic acid test. The officers interrogated her, took notes, and pressured her to sign the transcript.

The officers took Mr. Li’s keys and ransacked his home when no one was there. They confiscated a laptop computer, a printer, and a SD card speaker. The three practitioners were released on the same day, but the confiscated items have not been returned.

Officers from the Xiyang Police Station broke into the homes of Ms. Zhang Shufang, Ms. Ma Li, Ms. Li Guixia, and Mr. Yang Jingfeng and arrested them on the morning of June 18, 2022. Ms. Ma was so frightened that she suffered a heart attack and seizures in her arms and legs. Her blood pressure reached 180/130 mm Hg. She was taken to the Xiyang Health Center.

The officers ransacked the four practitioners’ homes the following day. They confiscated all of Ms. Zhang’s Falun Gong books and over 1,000 yuan in cash in her bag. After being held in custody for one day, the four practitioners were taken to a detention center, which refused to accept them due to the pandemic. They returned home at around 9 p.m. on June 19.

Mr. Wang Dezhen and another practitioner from Jiuzhou Town in Guangyang District went to the Gu’an County farmers market to clarify the truth a few days ago. Officers from the Chengdong Police Station impounded Mr. Wang’s car.

Jin Gang, director of the Xiangshuihezi Township Police Station in Xinbin County, brought two officers and the Yaobao Village Party secretary to Ms. Yang Furong’s home and ransacked the place on the morning of June 9, 2022. They confiscated her Falun Gong books and Minghui Weekly publication. They took Ms. Yang to the police station and told her that she was observed on surveillance cameras on May 10 while posting Falun Gong signs. The officers said another person was with her at the time and demanded that she tell them who that person was. During this period, the officers also arrested someone who was not a practitioner. Ms. Yang refused to cooperate during the interrogation, so they brought in officers from the county to intimidate her.

That evening the officers threatened Ms. Yang’s son by telling him that his mother would be detained and sentenced to prison if she did not give out the name of the other person. Her son was so frightened that he told the police that the other person was his eldest aunt. The officers arrested his aunt, Ms. Yang Fuling.

The officers used the leverage of implicating their children to get the Yang sisters to write guarantee statements promising that they would quit practicing Falun Gong. The sisters also paid a security deposit of 1,000 yuan each and were released.

Ms. Zhao Mei was arrested at home by a group of people at noon on June 15, 2022. Her whereabouts are unknown.

Officer Wang Wenjun from the Wujia Town Police Station in the Shuangcheng District, along with several other people, all wearing white hazmat suits, broke into Ms. Zhang Li’s home in Min’an Village and arrested her. They confiscated a full set of over 40 Falun Gong books, a photo of the founder of Falun Gong, a small speaker, and a cell phone. Except for the phone, the other items have not been returned. They forced Ms. Zhang to provide her fingerprints and released her that day.

Ms. Yang Suxia, 75, from the Hantai District, was arrested and interrogated on October 27, 2021. The officers told her that she was seen on surveillance cameras while placing Falun Gong materials on the windshield of a car. The officers coaxed her into signing her name by promising that she could go home after she signed the transcript. Ms. Yang believed them and signed the transcript.

Ms. Yang had not been contacted by the police. She recently received a written decision on administrative punishment from the Hantai District Police Department. It was stated in the decision that she was given five days of administrative detention, which would not be enforced as Ms. Yang was over 70 years old. However, the police claimed that they would instead place her under residential surveillance to restrict her personal freedom.

Two men in assistant police uniforms from the Huayuan Police Station in the Laiwu District went to Mr. Wang Zi’s home on the afternoon of June 14, 2022. They first asked him why he was not vaccinated, then they demanded that Mr. Wang write a statement renouncing Falun Gong while they video recorded the conversation. He stopped them from video recording and refused to cooperate.

Ms. Yuan Jing and Ms. Zhou Shubing were reported to the police by a high school student when they were talking to the student about Falun Gong on the morning of June 10, 2022. They were arrested. The officers took the keys from Ms. Zhou’s bag and went to ransack her home. They confiscated a photo of the founder of Falun Gong and Falun Gong books. Ms. Yuan, in her 40s, was tied to an iron chair torture device and interrogated. The officers tried to snatch the keys from her hand. Ms. Yuan did not give them the keys, and instead clarified the truth to them.

Ms. Zhou’s husband also went to the police station to demand her release. As Ms. Zhou had been arrested several times, the officers threatened him and forced him to sign paperwork. Ms. Zhou held tightly to her chest the confiscated Falun Gong books and the photo of Falun Gong’s founder when they were leaving the station. The officers nonetheless snatched a book from her arms.

Director Huang of the Zhuwa Town Police Station in Xishui County, and five other people who were carrying handcuffs and electric batons, broke into Mr. Zhong Changkui’s home on the morning of June 14, 2022. Mr. Zhong was working in the fields and was not at home. They ransacked the place and confiscated his Falun Gong books. They tried to confiscate a photo of the founder of Falun Gong, but they were stopped by Mr. Zhong’s nephew.

They returned to Mr. Zhong’s home that afternoon, and used white paint to paint over the “Falun Dafa is good” signs on his door and inside his house.

Mr. Li Jingsong, in his 50s, stepped out of someone’s home at noon on June 13, 2022. He was followed and arrested by two police officers in plainclothes. A police car pulled over immediately, and he was dragged into it. It is unknown where he was taken.

Ms. Wang Xuezhen, 78, was arrested by officers from the Public Transportation Police Department on July 9, 2019. When she was detained in the Haizhu District, she was severely abused and suffered serious damage to her thoracic and lumbar vertebrae. She was unable to stand up, and could only crawl.

Ms. Wang was sentenced to four years in prison by the Haizhu District Court despite her serious health condition and advanced age. She was taken to the Guangdong Province Women’s Prison and is now in the prison hospital.

Mr. Ni Jieming from Huangdai Town, Xiangcheng District, was reported to the police while distributing Falun Gong materials on June 2, 2022. He was arrested and his home was ransacked by officers from the Huangdai Town Police Station. He was subsequently taken to Suzhou City Detention Center.

Officers from the Tongzhou District Domestic Security Division and the Zhangjiawan Police Station went to Ms. Miao Bojun’s home and arrested her on June 14, 2022. The officers ransacked her home and confiscated a photo of the founder of Falun Gong and over 50 Falun Gong books. She was taken to the Tongzhou District Detention Center. She was released on bail and returned home that night.

Elderly Ms. Li Weidong from the Zhangqiu District was reported to the police while distributing Falun Gong materials in the Yongdamingzhu Residential Community. She was arrested by officers from the Shuangshan Police Station on June 16, 2022. She was released that day.