(Minghui.org) The Shen Yun International Company presented seven performances in the Taiwanese cities of Taichung and Changhua on June 29 through July 3, 2022. 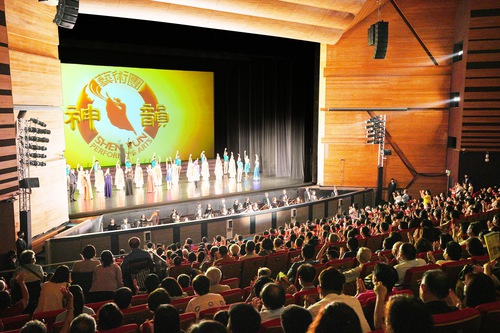 The Shen Yun International Company at the Taichung City Chung Shan Hall in Taichung, Taiwan, on the afternoon of July 1. The company presented five performances in Taichung June 29–July 1. 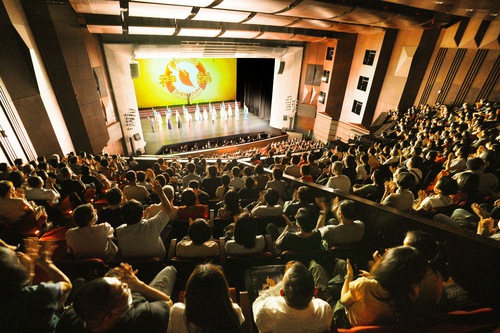 The Shen Yun International Company’s curtain call at the Yuanlin Performing Arts Hall in Changhua, Taiwan, on the afternoon of July 3. The company presented two performances in Changhua on July 3. 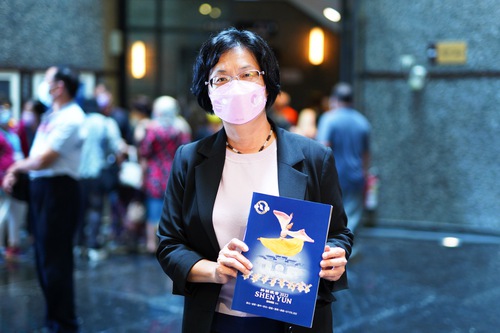 Wang Huei-mei at the Shen Yun performance in Changhua on July 3.

“Shen Yun is a gripping performance. We couldn’t stop ourselves from applauding in the middle of a program,” Ms. Wang said.

“The dancers’ techniques and skills are brilliant... Every moment, you are astonished by the admirable performance. Shen Yun is really beautiful,” she said.

As the highest-ranking official in Changhua, Ms. Wang said she appreciated Shen Yun’s visit to the city. She felt the performances were particularly special after two years of the pandemic.

“I understand how difficult it is to come to Taiwan and perform after the epidemic. All Shen Yun artists are from overseas. They perform superb classical Chinese dance, bringing us a great visual feast, and, more importantly, it calms our minds. Thank you very much!” she said. 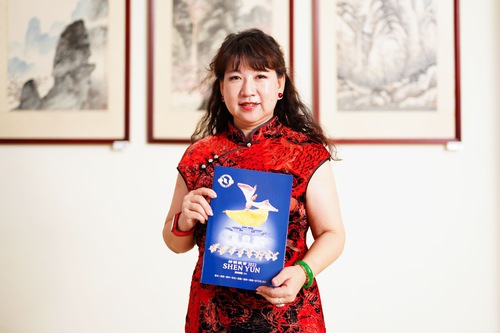 Huang Kuan-yu at the Shen Yun performance in Taichung on July 1.

Huang Kuan-yu, an award-winning painter and director of the Fine Art Story House in Taichung, saw Shen Yun in Taichung on the evening of July 1.

“Shen Yun is delivering love, the love given by gods, the love that is tolerant toward all sentient beings,” Ms. Huang said.

“Shen Yun seems to be showing stories that are told in the heavens, letting us move along and resonate with their music, postures, lights, and colors. It felt as if they came down from the heavens to tell these stories.

“I didn’t want to stop watching. I felt very happy. The last scene made you feel very relaxed and full of hope. The colors on stage were colors from nature—completely present between heaven and earth.

“What you see on stage are happy colors. There were no gloomy colors. The waves of these colors can trigger elements of joy in the human heart. So I think this is also a form of delivery. The divine wants to influence everyone through this means.

“They’re really performing with a pure heart, so you did not have any feeling of negative energy. And that pure energy is very strong.

“I think Shen Yun is communicating words the divine wants to tell us—to treat this seriously, and no matter how the environment changes, we should be a good child [of the divine]. This music and these dances can all guide us toward a happy life.

“I think Shen Yun wants to encourage us and tell us that we should influence, encourage, and appreciate each other. We are together and life is happy. We have to work hard together,” she said. 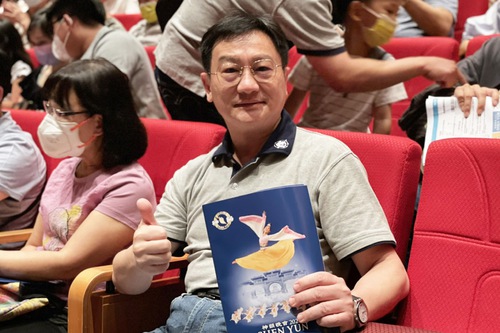 Chuang Min-jen at the Shen Yun performance in Taichung on June 30.

Chuang Min-jen, dean of the National Taichung University of Education’s College of Humanities, saw Shen Yun in Taichung on the evening of June 30.

“These (performances) are a skillful form of human communication that is very important and very wise. Shen Yun even uses a kind of imagery to deliver the beauty of traditional culture. This was choreographed by a wise person who has great wisdom. From it you can also see the meaning in the dances, which is the spirit of compassionate and courageous people and a generous heart,” Mr. Chuang said.

“Each program has features of traditional culture, and thoroughly expresses the characteristics of various cultures through dance and through diverse arts. It is an expressive and wise way to display a generous heart and the beauty of this culture.

“I think Shen Yun is a musical and artistic performance with energy, and it encompasses the highest realm of comprehensive arts! With this emotion for the culture, the beauty of the culture, and the emotion of binding us together, I think everyone has already forgotten the pandemic. There’s only enthusiasm,” he said. 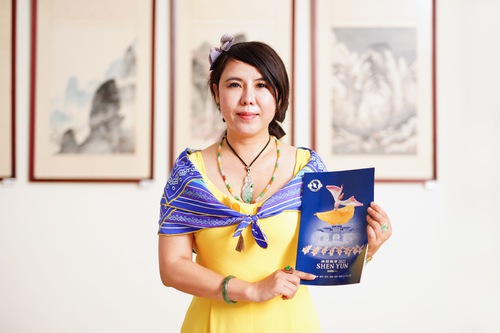 Lin Ming-li at the Shen Yun performance in Taichung on July 1.

“I was deeply moved!” said Ms. Lin. She thought the performers had, “A kind of vitality. Shen Yun brings people benevolence. What it spreads is positive energy. I was very inspired by the performances.

“The sincerity, kindness, and beauty of the performers touched me very much. During this pandemic, people are anxious and cannot calm down enough to appreciate beautiful things. But Shen Yun made people feel calm. The mind was tranquil and the soul was cleansed and calm.

“This is an excellent artistic performance. I hope I have the chance to see this beautiful Shen Yun every year. I hope everyone comes every year,” she said.

“Well Worth the Trip” 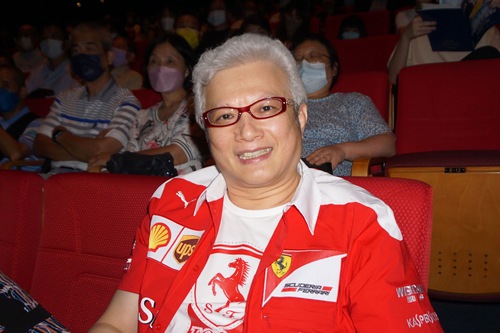 Wisdom Tsai at the Shen Yun performance in Taichung on July 1.

Wisdom Tsai, a celebrity numerologist, geomancer, and fortuneteller, saw Shen Yun in Taichung on the evening of July 1.

“It was well worth the trip,” said Mr. Tsai, who came to Taichung from Taipei to see the performance.

“Shen Yun is able to inspire people’s spirituality using dance drama performances. The performances incorporate traditions, ethnic groups, and faith, which are very important to today’s society, because modern people are lacking in these aspects. Even though people live wealthy lives, their hearts are impoverished. To inspire people would require finding their true selves,” he said.

To Mr. Tsai, Shen Yun is a beacon that guides people to discover their true nature.

“The stories speak to the heart and make the heart calm. They cleanse the heart. With respect to spiritual aspects, it felt like there was a lighthouse. Of course there was also faith in it. Then it brought out people’s kind thoughts through drama and unspoken language,” he said.

“Not Something Ordinary Art Groups are Able to Display” 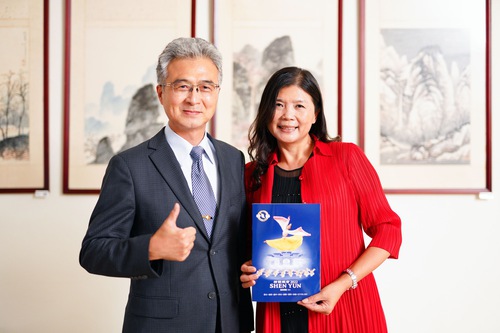 Charles Yen and his wife at the Shen Yun performance in Taichung on July 1.

Charles Yen, the president of Yenstron Corp. and an executive director at the Taichung City Chamber of Commerce, saw Shen Yun with his wife in Taichung on the evening of July 1.

“The feeling I had while watching Shen Yun was like how gods give me a kind of strength, giving me strength through gentle means. The performers’ movements are very beautiful. They must have put in a lot of time, spirit, and tolerance to enable the audience to comprehend life in a very comfortable and calm mood. This is not something ordinary art groups are able to display,” he said. 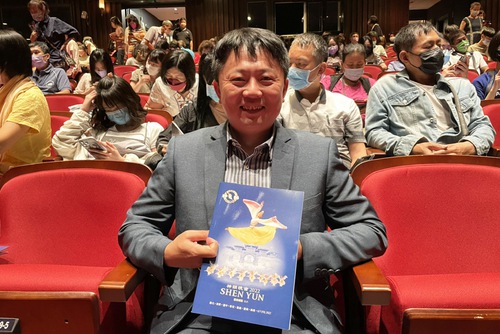 Chen Ying-hao at the Shen Yun performance in Changhua on July 3.

Chen Ying-hao, president of the Tukuyi Cocoa Farm and president of a real estate investment and development company, saw Shen Yun in Changhua on the evening of July 3.

“Astounding! I want to see it again! Besides the great dancing, they also inspire people and show them how to be kind through the stories. I think it’s truly a worthwhile trip. Amazing!” Mr. Chen said.

Speaking of the opening scene, he said, “The sky was full of gods and Buddhas... All the colors! It really made you sense that each person’s qi field or energy was different.”

“Whether it’s the level of the dancing or costumes, the digital backdrop, or the East-West blended music, it was so great. Top-notch, world-class level,” he said.

“There’s a saying, ‘One minute on stage takes ten years of hard work.’ I really don’t know how much hard work these performers put in behind the scenes to make all the movements and dance this mature and perfect. I think Shen Yun should be recommended to everyone.

“[Besides traditional Chinese culture], there was more so the culture of kindness, promoting a cycle of kindness, which I think is an aspect that today’s society very much needs and is also very important,” he said.

“Gave Us Confidence in Traditional Things” 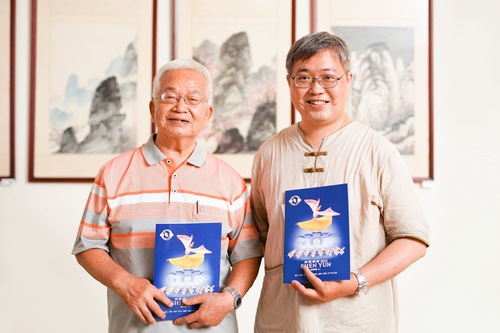 Wu Tung-cheng and his father at the Shen Yun performance in Taichung on July 1.

Wu Tung-cheng, editor-in-chief of classical poetry at the Chien Kun Poetry Quarterly Press, saw Shen Yun with his father in Taichung on the afternoon of July 1.

Mr. Wu was especially moved by the opening scene. “There was a feeling of being in a heavenly world, both real and dreamlike,” he said.

Speaking of the scene portraying how the Creator brought divine beings to build human civilization on earth, “This really resonated with me,” he said.

“(In the performance) the Creator let us know why we came to the world and why we’re here. We do not own his world. We need to become humble, treat this world better, and let living beings and the earth have better interactions.

“It gave us confidence in traditional things... Seeing this many artists who sacrificed their time and spent a lot of hard labor to spread a culture this good, I very much appreciate the opportunity to see Shen Yun,” Mr. Wu said. 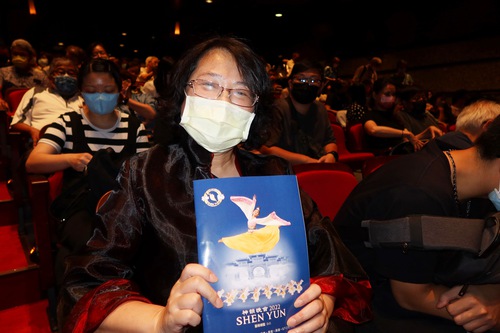 Liu Yuan-an at the Shen Yun performance in Changhua on July 3.

Ms. Liu said she was especially touched by the soprano’s bel canto solo performance, “Dafa Leads Back to Heaven.”

“I don’t know how to describe the feeling the song evoked in me. My tears kept flowing. I felt so grateful. It felt as if I was suddenly enlightened and empowered... So my tears came. I think those were tears of joy,” she said.

“I was stunned once the curtain opened... My whole body and scalp felt numb, and then it felt like an electric current passed through my body. What astonished me the most was the scene where the Lord Buddha brought the divine beings to the earth. I suddenly enlightened that people around me are from the heavens. I’ve read an article before that actually the people around you are from the heavens.

“I think these Shen Yun artists are people who came from the heavenly realm. My feeling is that they’re so young and their qualities are so good, so their body language was not learned in this lifetime. They carried divinity each time they reincarnated—and we’re here to receive this light,” she said.