(Minghui.org) During the Stockholm+50, an international meeting convened by the United Nations General Assembly, June 2 – 3, 2022 in Stockholm, Falun Dafa practitioners set up a booth in front of the Nobel Museum. They told people about Falun Dafa and how the spiritual practice is persecuted in China. 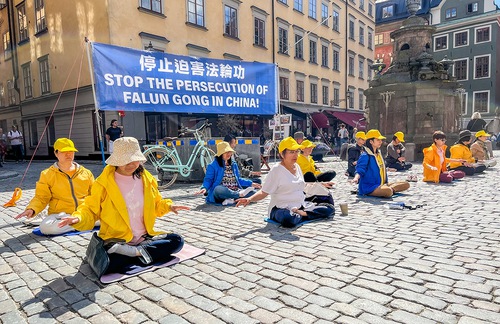 Practitioners demonstrate the exercises in front of the Nobel Museum on June 4, 2022. 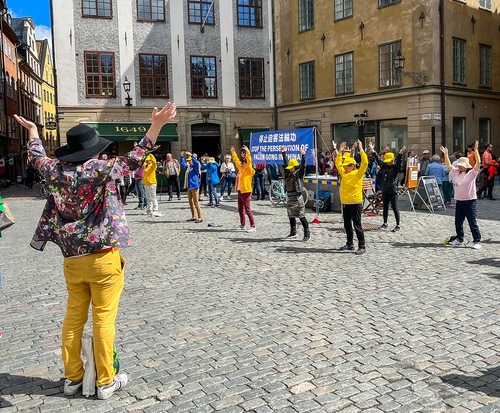 Impressed by the gentle exercises, some passersby stopped to learn them.

The Stockholm+50 was held to commemorate the United Nations Conference on the Human Environment at Stockholm, which was first held in 1972. Besides this conference, many people were in the city for the Stockholm Marathon, which was held on June 4. With the traffic restrictions, practitioners parked their vehicles two kilometers away and carried their materials to the site. 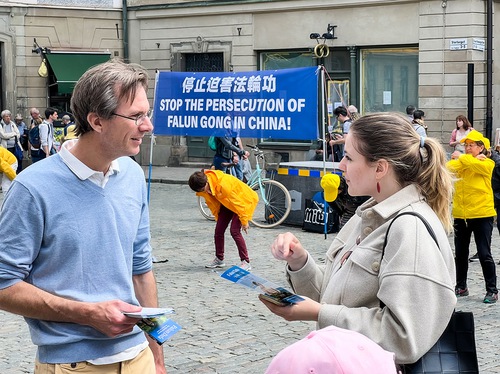 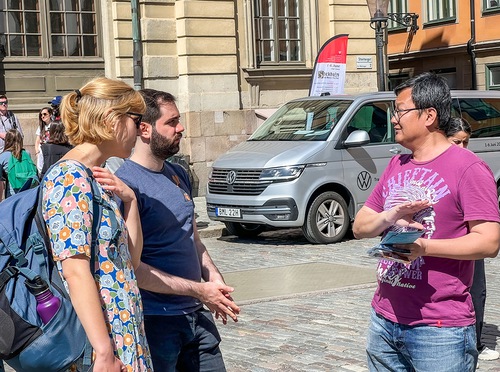 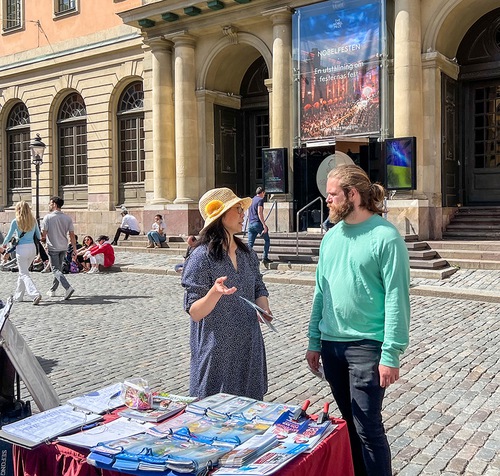 Passersby stopped to talk with practitioners and learned more about Falun Dafa. 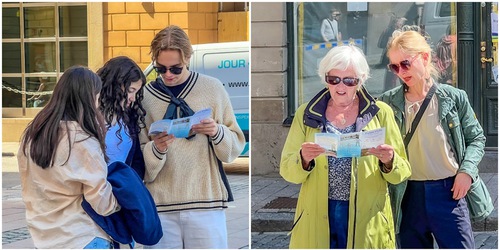 People read about the persecution in China

The peaceful exercises and soothing music attracted lots of attention from tourists. Some tour guides also told them about Falun Dafa. Many people took photos or videos, while some asked for more information or asked to learn the exercises.

Shocked by the Persecution

Christina took a flyer and stood by the side to watch the exercise. “The music is very soothing and refreshing,” she said, “It is hard to imagine how the Chinese Communist Party (CCP) would suppress something like this. This is why the CCP regime has problems, when it does things like this.”

Pointing to the words, “Truthfulness, Compassion, Forbearance” on the flyer, she added, “Our society needs this. I absolutely support and please keep it up!”

Shocked by the CCP’s brutality, especially organ harvesting from practitioners while they are still alive, Sofia said she knew that the CCP is bad, but did not know it was so vicious. She explained that her mother is from Shanghai, so she is Chinese-Swiss. Because her mother did not like the CCP, the family seldom visited China. But Sofia is aware of the regime’s track record of human rights violations, including the recent strict lockdown in Shanghai. “Chinese people have suffered so much! I strongly support you,” she told a practitioner.

David is Chinese but grew up in Spain. He likes traveling and said he is glad to see practitioners on his first trip to Sweden. He was disturbed by the CCP’s hate propaganda that defamed Falun Dafa. “I like China, but I don’t like the CCP since the regime brings disasters to the country. That is why I want to sever any ties with it,” he said as he signed a petition to condemn the persecution.

One middle-aged man from another European country was furious to hear the atrocity of forced organ harvesting in China. “No more CCP!” he exclaimed, adding that more people need to join the momentum to stop the tragedies.

Latest Podcast
Podcast (Cultivation): “Grateful for Opportunities to Walk My Cultivation Path Well While Participating in a Film Project”
- Jun 06, 2022