Home > Persecution > Accounts of Persecution
80-year-old Woman Taken to Prison to Serve Third Term for Her Faith in Falun Gong
June 22, 2022 | By a Minghui correspondent in Heilongjiang Province, China

(Minghui.org) Shortly after the Chinese New Year in early February 2022, an 80-year-old woman was taken to prison to serve a four-year term for her faith in Falun Gong.

This is the third time that Ms. Wang Jingcui has been sentenced since the Chinese communist regime began to persecute Falun Gong in 1999.

Ms. Wang, of Daqing City, Heilongjiang Province, was arrested in November 2019 after being reported for talking to people about Falun Gong at a farmers’ market. The police ransacked her home and released her on bail due to her poor health, after holding her at the police station for five hours. Since then, the police often called her son and ordered him to sign a statement renouncing Falun Gong on her behalf.

Even though Ms. Wang suffered declining health and was unable to walk, the police arrested her again at home on May 8, 2021, and took her to the Daqing City No. 2 Detention Center in a wheelchair. She fell into critical condition there and required emergy treatment. Yet the authorities barred her family from visiting her after taking her back to the local detention center.

The Daqing High-tech Industrial Development Zone Court secretly sentenced Ms. Wang to four years and fined her 10,000 yuan. Only when her family called the court themselves on October 15, did the court inform them of the verdict. The family also found that the court withheld the 10,000 yuan directly from Ms. Wang’s bank account without their knowledge.

Ms. Wang was transferred to the Heilongjiang Province Women’s Prison in February 2022. It’s not clear whether her family has been allowed to visit her since.

Ms. Wang took up Falun Gong in 1998. With the onset of the persecution, she has been arrested and had her home ransacked multiple times. In addition to her latest prison term, she also served one labor camp term and two previous prison terms.

Ms. Wang was first arrested on June 13, 2000, when she went to Beijing to appeal for the right to practice Falun Gong. She was taken back to Daqing and detained for 55 days. The government officials extorted 3,300 yuan from her on June 17.

She returned to Beijing to appeal for Falun Gong on November 28, 2000 and was arrested again. After two days of detention in Beijing, she was taken back to Daqing. The government officials extorted another 1,250 yuan from her on December 2.

On January 8, 2001, after nearly 40 days of detention, Ms. Wang was taken to the Heilongjiang Province Women’s Forced Labor Camp to serve a one-year term. The guards extorted 200 yuan from her on March 18.

Because Ms. Wang refused to renounce Falun Gong, the guards forced her to watch propaganda materials that slandered Falun Gong, as well as videos that promoted other religions. In addition to the brainwashing, she was forced to make paper boxes without pay. She was released on June 22, 2001.

The authorities extorted another 1,655 yuan from her on August 27, 2001 and suspended her family’s low-income subsidy.

Ms. Wang was arrested another time on October 11, 2001 after being followed by the police while distributing informational materials about Falun Gong. She was detained for 45 days this time.

Ms. Wang was arrested at home on May 30, 2002 by seven officers. They handcuffed her wrists behind her back and took her to the Daqing Detention Center, where she was held for eight months.

The Honggang District Court held a secret hearing for Ms. Wang on November 11 and later sentenced her to five years at the Heilongjiang Women’s Prison.

In the prison, she was subjected to constant torture. The guards once held her in solitary confinement just because she closed her eyes.

While Ms. Wang was released early from the first prison term, she was arrested again on June 9, 2006, after being reported for talking to people about Falun Gong. 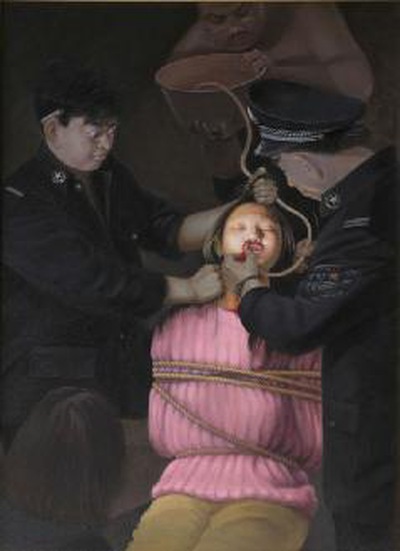 At the Daqing Detention Center, Ms. Wang held a hunger strike for over 40 days and was force-fed twice every day. As she tried to resist the forced-feeding, two of her teeth were knocked out and her lips were severely swollen. She was also tied up and handcuffed to the bed. When she was untied and unshackled, she was so weak that she couldn’t walk on her own.

Ms. Wang stood trial at the Honggang District Court on July 25, 2006. She was sentenced to another four years at Heilongjiang Province Women’s Prison by presiding judge Zhang Xiuren, his assistant Kong Qingguo and vice president of the court Chen Dehu.

When Ms. Wang was released on June 9, 2010, she was incapacitated and struggled with declining memory.

An Appeal from Family and Friends: Falun Dafa Practitioner Ms. Wang Jincui, 64, of Daqing City Has Been Illegally Sentenced

Practitioner Ms. Wang Jingcui Brutally Force-fed After More Than a Month on a Hunger Strike at the Daqing City No. 1 Detention Center

“Elderly Couple Imprisoned for Their Faith”