Home > Persecution > Torture > Torture of Women
Woman Spends Nearly 16 of Past 23 Years in Detention Because of Her Faith
June 19, 2022 | By a Minghui correspondent in Guizhou Province, China

Ms. Yuan used to be an employee of the Xishui County Guandian Industrial and Commercial Office. Now, after her latest release in April 2022, she is facing tremendous financial hardship, with no family, no house, and no job.

Ms. Yuan was arrested in July 2004 and later sentenced to three years in prison. She was taken to Yang’ai Women’s Prison (later renamed as Guizhou Province No. 1 Women’s Prison). As soon as Ms. Yuan arrived at the prison, she was dragged into a dark room and beaten all night by several inmates instigated to do so by the prison guards. 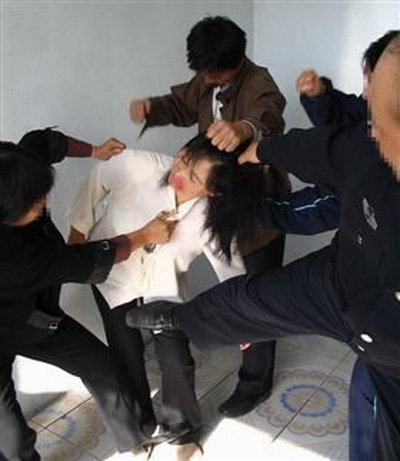 The next morning, Ms. Yuan was slapped in the face by a guard surnamed Tian and passed out. After she came to, she found herself in a confinement room, monitored by the inmates. She was not allowed to leave the room for anything. Eating, using the restroom, and sleeping were all done inside this room.

Three months later, Ms. Yuan was switched to the No. 4 Brigade specifically established for persecuting Falun Gong practitioners. In order to “transform” her, the guards employed various tortures. Ms. Yuan was often beaten and verbally abused. She sometimes was forced to stand up for the entire night.

On one occasion, Ms. Yuan was tied up in bed and beaten. To prevent other inmates from hearing her cries for help, the guards gagged her, causing her teeth to come loose. Eventually, she lost nine teeth by the age of 50.

The guards also forced Ms. Yuan to attend meetings designed to denounce her. The persecution caused her great physical and mental injury.

Only one month after being released from prison, Ms Yuan was arrested again and taken to the Zunyi City Brainwashing Center in August 2007 by the 610 Office. She went on a hunger strike to protest the arrest and was force-fed. She was kept in the brainwashing center for three months.

In May 2008, Ms. Yuan was arrested in Guiyang City, and then taken to Zhongba Labor Camp to serve two years. In the beginning, she was locked in confinement for three days. She was forced to stand for more than ten hours every day and not allowed to sleep. If she failed to stand still or she fell asleep, she would be beaten and kicked by inmates.

Some drug addicts kneed her chest and elbowed her back. They slapped her with shoes and kicked her all over the body.

The inmates also tortured Ms. Yuan mentally. They locked her in a dark room for more than six months. The doors and windows were covered with red cloth. There was only one 15-watt lamp inside the room, which was wrapped in red paper. Because of the persecution, Ms. Yuan, then 44, looked like a woman in her 70s.

Ms. Yuan remained firm in her belief while in the labor camp. She refused to be “transformed.” When her term expired in May 2010, the local 610 Office agents took Ms. Yuan directly to the Lannigou Brainwashing Center, where she was kept for another six months.

When Ms. Yuan walked out of the brainwashing center, she had no place to live and had to wander from place to place. She later found a job as a housemaid to make a living.

For the first two years, she was locked in a small room and subjected to intensive brainwashing, including being forced to wear the prison uniform and name tags that indicated she was a criminal. She was often denied restroom use. The inmates forced her to read books that slandered Falun Gong. They also forced her to watch derogatory videos at maximum volume.

After the brainwashing failed to shake her faith, the guards began to force Mr. Yuan to do unpaid labor, while arranging inmates to monitor her around the clock.