(Minghui.org) Mr. Chen Zhongxuan, a former police officer in Huining County, Gansu Province, was sentenced to six years following his arrest in 2014 for practicing Falun Gong. Although he survived the relentless torture in Lanzhou Prison and was released in April 2020, he was fired from his job, which resulted in tremendous financial difficulty for him. 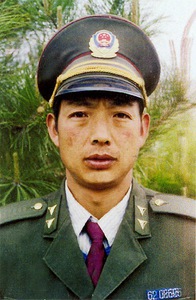 Mr. Chen, 61, was a first-class sergeant in the Huining County Police Department and served two terms as a police station chief. He has participated in the investigation of several major cases and was awarded by his superiors.

Mr. Chen started to practice Falun Gong, a spiritual discipline also known as Falun Dafa, in 1996. After the Chinese Communist Party (CCP) launched a campaign to persecute Falun Gong in 1999, he has been harassed, arrested, and detained multiple times.

Harassed in the Police Department

In June 1999, one month before the persecution started, Mr. Chen did the Falun Gong exercises in police uniform at the Dongfanghong Plaza in Lanzhou City (capital of Gansu Province), while attending a new job training there. He was forcibly removed from the plaza by police from the Qingyang Road Police Station. After being interrogated for two hours, he was taken to the Gansu Province Police Academy. The academy’s leadership ordered him to give up Falun Gong the next day, and write a repentance report.

Mr. Chen wrote a long letter, explaining that Falun Gong’s principles of Truthfulness-Compassion-Forbearance are universal values and that Falun Gong has numerous benefits and causes no harm to the nation or society.

When Mr. Chen reported back to work at the Huining County Police Department after the training ended in July 1999, the police chief, Song Tinghuai, shouted at him as soon as he saw him, “You caused big trouble for me when you were in the police academy. The provincial and city superiors are putting pressure on me. The secretary of the county Party committee scolded me violently. It is Jiang Zemin (the former head of the Chinese Communist Party who ordered the persecution), not me, who does not allow you to practice Falun Gong.” Many leaders in the police department also ordered Mr. Chen to give up the practice, but Mr. Chen did not budge.

After the persecution officially began on July 20, 1999, a dozen Falun Gong practitioners in Huining County, including Mr. Chen, appealed to the provincial government. They were arrested by officers from the Lanzhou City Police Department and taken back to Huining. Mr. Chen was interrogated for an entire day and his home was ransacked. Also ransacked were the houses of his mother and brother-in-law.

Chief Song verbally abused Mr. Chen in his office and forced him to stand for hours. Mr. Chen was then detained for 17 days. He was also suspended from work. His pay was suspended for almost one year.

After he repeatedly appealed to the county committee and other government agencies, he was finally assigned to a position in the remote Bali Township government in May 2000.

Mr. Chen had almost no personal freedom when he worked in Bali Township. His movements were monitored and his phone was tapped around the clock. The verbal abuse by the local CCP members caused him severe mental trauma.

Mr. Chen, his wife, and three fellow practitioners went out to tell people the facts about Falun Gong on September 24, 2011. They were reported and arrested halfway through by officers from Zhongchuan Police Station. They were interrogated overnight in the police station. Mr. Chen escaped by climbing over the high courtyard wall.

The next day, more than 20 police officers in plainclothes ransacked his home and confiscated his Falun Gong books and valuable personal belongings including his wife’s gold necklace.

Miao Peng, the head of the Zhongchuan Police Station, who was present during the raid, took away all of the award certificates Mr. Chen had previously won. “I like them so much. I can’t even get one, but he did. If I find any Falun Gong items, you'll see how I straighten him out.”

After failing to catch Mr. Chen, the police posted an arrest warrant online nationwide. They monitored the phones of his family members and relatives. When a relative called Mr. Chen’s elderly mother the next day, someone on the other end said, “This is the police monitoring station. Please report to us if you have any tips.”

Mr. Chen’s wife, Ms. Han Xiufang, was later sentenced to three years in prison. To avoid being arrested again, Mr. Chen lived away from home for many years.

Mr. Chen was arrested at his rental place in Baiyin City, Gansu Province on September 19, 2014. The police handcuffed his hands behind his back and took him to the Xiqu Police Station. Also arrested were three other practitioners, including Ms. Liao Anan, Ms. Li Qiaolian, and Ms. Yang Qingxiu. The police confiscated from them three laptop computers, two printers, two CD recorders, Falun Gong books and informational materials, and more than 1,000 yuan in cash with short messages about Falun Gong printed on them (a unique way to raise awareness about the persecution given the strict censorship in China). The total loss was valued at more than 30,000 yuan.

During the arrest, Mr. Chen was beaten by four officers, causing the loss of one of his front teeth, and injury to his left thigh. 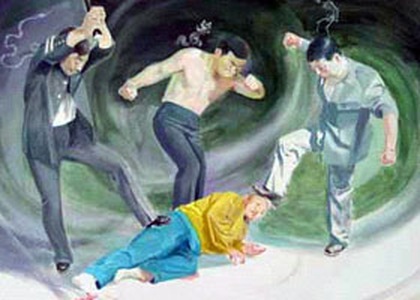 At the Xi District Police Station, the officers shackled Mr. Chen’s hands and feet to a tiger bench and stepped on the shackles, causing him to sweat profusely due to severe pain in his wrist bones. The torture caused numbness in his fingers for more than one year.

As he refused to cooperate with the police in the interrogation, they harassed his family members and searched their homes, looking for evidence to charge him.

Mr. Chen was assigned to No. 8 Ward. He was forced by inmate Tao Rong to clean the restroom and floor in the ward during the day and stay on duty for four and one-half hours at night. This inmate often verbally abused him and punched him in the head.

Mr. Chen was moved to the No. 6 Ward two months later, but he still endured the same abuses.

The Baiyin District Court held a secret hearing of Mr. Chen’s case on January 21, 2015. His family and those of Ms. Liao, Ms. Li, and Ms. Yang’s were not notified to attend the session. They were also not allowed to retain defense lawyers. Mr. Chen dismissed a court-appointed lawyer, who was instructed to plead guilty for him. He acted as his own lawyer and pleaded not guilty in court, but the presiding judge, Di Shenglu, frequently interrupted his defense.

The court announced the prison sentences of the practitioners on February 6, 2015. Mr. Chen was given 6 years, Ms. Liao 5 years, Ms. Li 5 years, and Ms. Yang 3 years. Mr. Chen appealed with the Baiyin Intermediate Court, which ruled to uphold the original verdict.

Mr. Chen was taken to the No. 6 Ward of Lanzhou Prison on April 7, 2015. The guards instigated criminal inmates to abuse imprisoned practitioners including Mr. Chen with the incentive of commutation. The inmates deprived the practitioners of sleep, forced them to write thought reports or sit on a small stool, and locked them in confinement units for long periods of time.

In order to transform Mr. Chen, the prison organized a four-member investigation team in June 2015. They went to the places where Mr. Chen once worked in Huining County, with the aim of finding fault with him in order to aggravate the persecution. Without getting the results they wanted, they went to Mr. Chen’s home and talked to his mother. One of them videotaped the scene and took a photo of the elderly mother, in an attempt to use the photo to shake Mr. Chen’s will.

Mr. Chen’s family went to the prison several times in August and September of 2015 to see him, but prison officials said they could not because he refused to renounce his faith.

When Mr. Chen’s family visited him in October and November again, they were allowed to meet with him, but the meeting was strictly monitored by the guards. They were warned that they had to help transform him, and could not mention anything about Falun Gong.

Mr. Chen’s family was notified that they were not allowed to visit him in December 2015 or January 2016.

The prison has long used many ruthless felons to persecute Falun Gong practitioners, and rewarded them with commutation. The felons were told that the prison only wanted to see the results and did not care what torture means were used. Since those felons were familiar with the means of torture, they came up with various cruel measures. They tortured Mr. Chen in the confinement room, where no monitoring cameras were installed.

In order to transform Mr. Chen, the felons forced him to either sit on a small stool motionless or stand up for as long as an entire day, or half day. The prison guards took turns talking with Mr. Chen, but they failed to make him give up his belief. They then ordered the inmates to monitor him around the clock and did not let him sleep. They forced him to view videos that slandered Falun Gong. 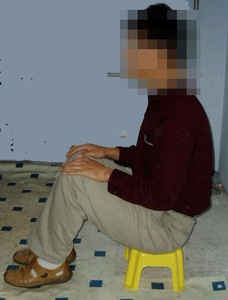 Whenever Mr. Chen was too tired and took a nap, he was beaten or hit about his entire body, including the eyes. The inmates also hit his face with wet towels. One inmate brutally filled Mr. Chen’s nose with chili water, causing him to cough and vomit violently.

Mr. Chen’s back was seriously injured from sitting on the small stool and standing for long periods of time, and he could no longer walk upright. In the second month of the persecution, his pulse was above 114, with the highest reading reaching 140 beats per minute. This situation continued for two months.

Guard Li Jide interrogated Mr. Chen from time to time. He asked Mr. Chen about the situation of the practitioners in Lanzhou City, Huining County, and other places. As all efforts used in the interrogation failed, Li intensified the torture. He ordered the inmates to continuously play videos that slandered Falun Gong in high-pitched voices.

Another prison guard, Li Yuan, asked Mr. Chen to write a thought report several times. When Mr. Chen refused, he became angry and kicked Mr. Chen off the bed to the ground.

All Falun Gong practitioners had to report their activities to the monitoring inmates. Mr. Chen once failed to report for going to the restroom. He was intensively verbally abused.

During his detention, Mr. Chen was held in the confinement room continuously for one year and seven months. Because of the persecution, he could not walk upright, and had irregular pulse. He also had symptoms of gallstones, abnormal liver function, and prostate problems.

While Mr. Chen was detained, his two brothers were under extreme pressure because the police continuously intimidated and raided their homes. Both of them passed away in 2008.

Due to sorrow and fear, the siblings’ 92-year-old mother passed away in February 2019. At that time, Mr. Chen was still being persecuted in the prison.

During the so-called “Zero-out” harassment campaign in Gansu Province in September 2020, Mr. Chen’s older sister and her husband, both of whom don’t practice Falun Gong, were repeatedly harassed and threatened. She could not bear the tremendous pressure and suffered a mental collapse. She was admitted to the intensive care unit for treatment. So far, her condition is still not stable.

“One Small Action Has a Large Effect”