(Minghui.org) The annual Portland Rose Festival runs from May 27 to June 26, 2022, in Portland, Oregon. Falun Dafa practitioners participated in the Grand Floral Parade on June 11, and their entry, which consisted of the Tian Guo Marching Band and a beautifully decorated float, was very well received by organizers and spectators alike. 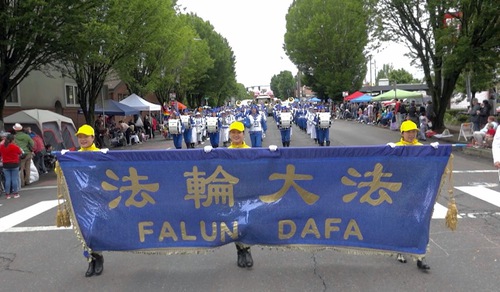 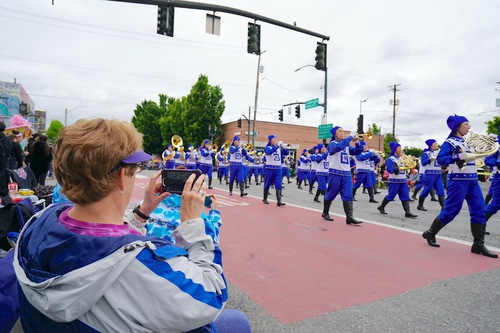 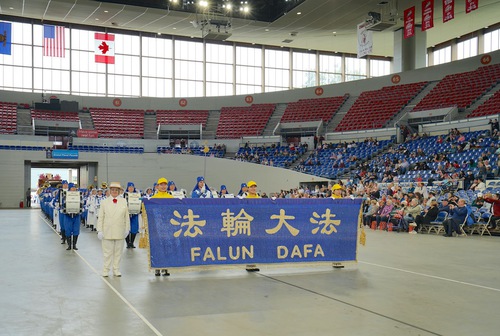 The Tian Guo Marching Band participated in the Grand Floral Parade during the Portland Rose Festival on June 11.

With a history of more than 100 years, the popular annual festival was suspended for two years due to the pandemic. Hundreds of thousands of spectators were excited to see the event return this year and they lined the two-mile parade route, which started from the Veterans Memorial Coliseum and wound through the city center.

The last group in the parade, the Tian Guo Marching Band, met with with warm applause. The band played a number of pieces, including, “Falun Dafa Is Good” and “The Star-Spangled Banner,” all of which were well received by the spectators. The host specifically invited the band to perform in front of the camera during the live television broadcast. 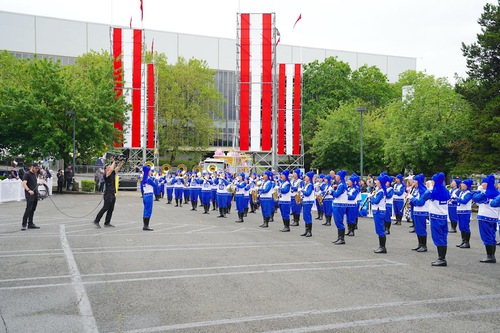 The Tian Guo Marching Band was invited to perform for a live television broadcast.

Abraham Thompson, the band director, told the host that all the members of the band are Falun Dafa practitioners. They strive to follow the principles of Truthfulness-Compassion-Forbearance, and they took part in the parade to present the beauty of the practice to the community.

Many people had high praise for the Tian Guo Marching Band’s performance. One person said, “This one is the best. It is really awesome!” Another person said, “From their costumes to the music, everything is great!” 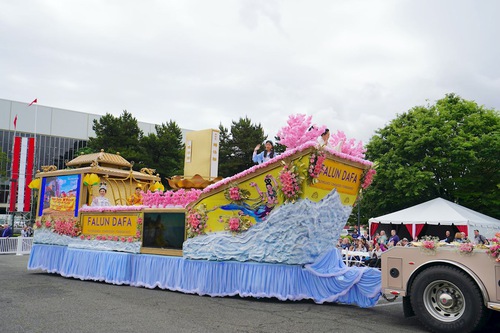 A beautiful float in the shape of a boat followed the Tian Guo Marching Band. Decorated with pink plum blossoms and roses, the float also had large television screens on both sides that displayed information about Falun Dafa.

Many spectators said that they are sorry to hear about the ongoing persecution against Falun Dafa in China. Marile Rose remarked, “Everyone should have the freedom of belief. This practice (Falun Dafa) improves both physical health and moral character. It’s hard to imagine people are suppressed in China for practicing it.”

“Falun Dafa Gave Me a New Lease on Life”