(Minghui.org) Today's news from China includes incidents of persecution that took place in 10 cities or counties in 6 provinces, where at least 23 practitioners were recently persecuted for their belief. 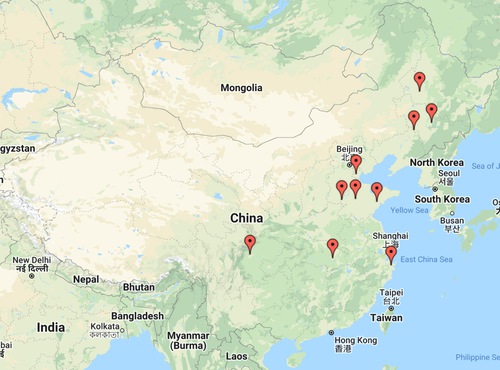 It was learned after many inquires that the Gaomi City police, procuratorate, and court were responsible for having Ms. Xu Xiaolan secretly sentenced her to three years in prison without notifying her family as required by law.

Ms. Xu was deceived by officers in March 2021. She went to the police station and was taken to the Gaomi City Procuratorate to sign an arrest warrant. Afterwards she did not return home. Her family and friends do not know where she is.

The Siping City Social Security Bureau stopped Ms. Wang Yuxiang’s social security payments in June 2020. They ordered her to pay back the money she received for two years while she was imprisoned. She filed a complaint with the local court in 2021.

The court sided with the Social Security Bureau on May 31, 2022, and announced that she had to pay back more than 40,000 yuan, and if she failed to pay the interest and penalty would be doubled.

Ms. Xiao Ailing and her husband, Mr. Ruan Xinghai, were arrested at home by seven or eight officers from the Longgang Police Department after 8:00 a.m. on June 6, 2022. Their Falun Gong books and other items were confiscated. The officers took them to the police department and released them on bail after 4:00 p.m.

Ms. Liu Yuqi of Mengyang Town was harassed at her home by Dongta Community director Yang Jianbo and two clerks after 9:00 a.m. on May 24, 2022. The group also went to Ms. Xu Wanping’s home, but she was not there.

Ms. Zhong Dianjun’s child’s parent-in-law received a harassing call from the local police station on May 26, 2022.

Ms. Li Yunfen of Mengyang Town was harassed three times at her rented home by a man and a woman in March 2022. They photographed her against her will each time. Her grandson was ordered by the army to go home and force her to sign a document renouncing Falun Gong between May and June last year. He was told he would be sent to military court if his grandmother did not sign it. Her daughter had to sign it for her.

Mr. Zhou Chunbao, deputy director of the Guan County Tax Bureau, was arrested and tortured. He is being held in the Huamei Hospital Hotel in Linqing City.

Ms. Xing Yaozhi, 85, was repeatedly harassed by clerks in her community and officers from her local police station.

She was harassed at home in March 2022 by deputy director Jin and five officers from the Wenmiao Police Station. This was the third time they harassed her. They ordered her to sign a police record. She refused.

Ms. Qin Shaohua was arrested by two officers on the morning of May 31, 2022, after two property assistants reported her when she distributed Falun Gong flyers in the community. Officers interrogated her in the Furi Police Station and collected her fingerprints and footprints.

Five officers grabbed her home key and ransacked the place. They seized more than ten Falun Gong books, two cell phones, an audioplayer, and 900 yuan in cash. At 6:00 p.m. they claimed the cash would be used as bail money. The next morning they extorted an additional 100 yuan, making the total 1,000 yuan, and filled in the paperwork for a year of release on bail. She was released.

Ms. Zhu Guangrong, in her 70s, was continuously harassed by 610 Office agents after she was released from prison. She rented a home in a remote suburb and hoped the long commute would help her escape the harassment.

But she was harassed at her rented home by brainwashing assistant Gong Lianghan and a woman on the morning of May 19, 2022. They saw Falun Gong books and a picture of Falun Gong’s founder, and threatened her that she would not get any of her pension if she did not renounce Falun Gong.

Ms. Zhao Liyan was arrested at home by three officers from the Longfeng Police Department on the afternoon of June 6, 2022. A picture of Falun Gong’s founder, Falun Gong books, and other items were confiscated. She was supposed to have been taken to detention, but she was released.

Ms. Li Shufang of the Binhai District was arrested by officers from the Gegu Police Station. She was released on bail for one year.

Seven practitioners in Ninghai County were arrested on April 21, 2022. The Ninghai County 610 Office dispatched a large group of agents around 10:00 a.m. and were actively assisted by officers from the Yuelong Police Station and clerks from the Yuelong Street Office. They raided the practitioners’ homes, searched and arrested them, and ransacked their homes. They seized a computer owned by Ms. Li Yujun’s niece (non-practitioner), a hard drive, a computer owned by Su Caihua’s son (non-practitioner), and many other items. The practitioners were held in the police station before they were released.

Ms. Han Rui talked to two middle school students about the persecution of Falun Gong on May 19, 2022. The students reported her. Three assistant officers from the Shengjing Town Police Station arrested her. At the police station, director Xie Xuefeng told her to cooperate when they questioned her. Officers were sent to search her home, but they came back because no one was there. She was released three hours later.