(Minghui.org) Today's news from China includes incidents of persecution that took place in 10 cities or counties in 4 provinces, where at least 13 practitioners were recently persecuted for their belief. 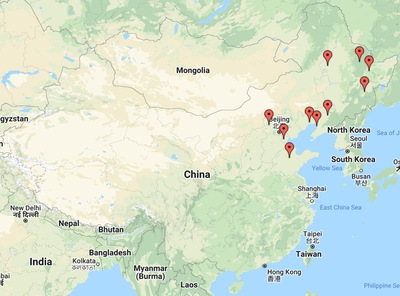 Ms. Sun Dexiang from the Wuying District was held in the Harbin Women’s Prison. She is in critical condition after being persecuted. She was transferred to the Heilongjiang Provincial Prison Administration Central Hospital. The prison officials told her family that she was diagnosed with intestinal cancer. They told them to sign the consent form for surgery and pay for it.

Officers from the Liaotun Town Police Station arrested Ms. Gao Ying when she was working in the fields in Yaoyatai Village on May 24, 2022. She was arrested by officers from that police station before but was released on bail. She left home to avoid further persecution.

On the same day, the officers also went to Ms. Li Xiujie’s home to harass her. She was not at home.

Ms. Chang Shuhua, in her 80s, from Dongjingcheng Town, Ning’an City, was arrested by officers from the Linye No. 2 Police Station while talking to people about Falun Gong on the street around 9 a.m. on May 13, 2022. The officers ransacked her home and confiscated all her Falun Gong books and 14,000 yuan in cash. She got 14,000 yuan back after demanding it be returned. She was released after 5 p.m. that day.

Officers from the Yongliu Police Station went to Ms. Sun Aihua’s home and ransacked the place at 6 a.m. on May 9, 2022. They confiscated a printer, a computer, and her Falun Gong books. They arrested Ms. Sun and her 80-year-old mother. Her mother was released that day.

Ms. Sun was taken to the Zhangdian Detention Center after 15 days of quarantine.

Ms. Zhen Shulan, 82, was arrested at home by officers from the Longhua Road Police Station on April 13, 2022. The officers grabbed her bag and keys and took her to the police station for interrogation. That evening the officers called her son to pick her up. The officers ordered her to sign a form before releasing her, but she refused to. The officers threatened that neither she nor her son would be allowed to leave until she signed it. They grabbed her hand and signed her name.

When Ms. Zhen got home, she found that the officers had also confiscated photos of the founder of Falun Gong, Falun Gong books, a mobile phone, a computer, an incense burner, a data transfer cable, and her 300 yuan to pay for living expenses.

Ms. Zhao Xiuhua from Shalingzi Town was reported to the police for talking to people about Falun Gong on May 20, 2022. She was caught on surveillance cameras and was arrested at home by officers from the Shalingzi Town Police Station around 3 p.m. on May 23. The officers confiscated photos of the founder of Falun Gong, a computer, a printer, and Falun Gong books.

At the police station, Ms. Zhao twice developed illness symptoms, which resulted in physical discomfort. While she was held there, the officers went to her home and ransacked the place again. She went home at 9 p.m. that night.

Ms. Gong Huaifang, in her 80s, who is retired from Huanan Forestry Bureau, was recently arrested at her home by officers from the Xinlin Police Station. The officers pressured her to sign a transcript.

About two days later, a group of officers broke into Ms. Gong’s home at noon. They rudely questioned her and asked why she went out that morning and what she did. They then ransacked her home. They took Ms. Gong to the police station for more questioning. Later, the officers brought over several printed booklets for her to sign, which she refused. The officers called her husband, who had been worrying and waiting outside the police station, to sign on her behalf before releasing her.

Ms. Yao Zhifeng was arrested by officers from the Daliang Police Station in the Wuqing District on May 24, 2022.

Mr. Lou Yuejun from the Bayuquan District was given a harsh eight-year prison term in 2015. He is currently being held in the Dalian City Prison. His prison term will end in early June 2022.

Mr. Lou’s wife Ms. Bian Aina is being held in the No. 10 Ward in Shenyang Prison. She has been denied the right to call her family because she refused to be transformed.

Her seven-year-and-six-month prison term will end on February 9, 2023.

Ms. Wang Caiyun and Ms. Sun Wenwen, both in their 70s, were arrested by officers from the Longfeng Police Station on May 17, 2022. The officers ransacked Ms. Wang’s home and confiscated her Falun Gong books. Both practitioners were released around midnight.

“Maintain Righteous Thoughts in the Face of Sickness Karma”