Home > News & Events > Parades & Other Community Events
Germany: Practitioners at Cultural Festival in Dortmund Praised for Raising Awareness of the Persecution of Falun Dafa in China
June 16, 2022 | By a Falun Dafa practitioner in Dortmund, Germany

(Minghui.org) Falun Dafa practitioners in Germany’s North Rhine-Westphalia region participated in Brueckenfest on June 11, 2022. They set up an information booth, gave waist drum performances, and demonstrated the exercises. One person who stopped and watched said, “I can feel the deeper meaning behind this practice.” Many learned about the ongoing persecution in China and signed the petition to help end it. They also encouraged practitioners to “keep up the good work.” 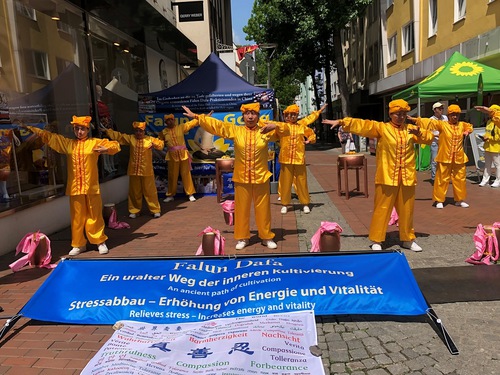 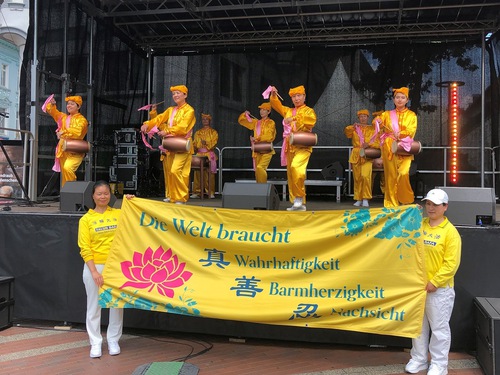 Brueckenfest, which featured over 80 booths and hands-on activities, was held on a boardwalk in Dortmund, and many people came out to enjoy the clear blue skies and warm breeze. Some of the practitioners demonstrated the exercises while others played the waist drums on stage.

The bright blue “Falun Dafa Is Good” banner and practitioners’ brilliant yellow costumes attracted many peoples’ attention. Passersby stood in line to either sign the petition or get a truth-clarification flyer. A photographer hired by the festival organizers also signed the petition. An elderly couple said after learning more about Falun Dafa, “What you are doing is right. Keep up the good work.” 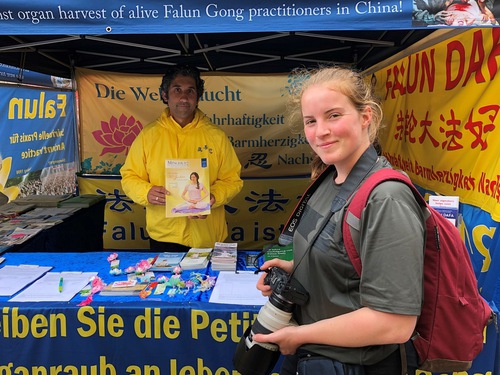 A photographer for the event took a picture with a practitioner. 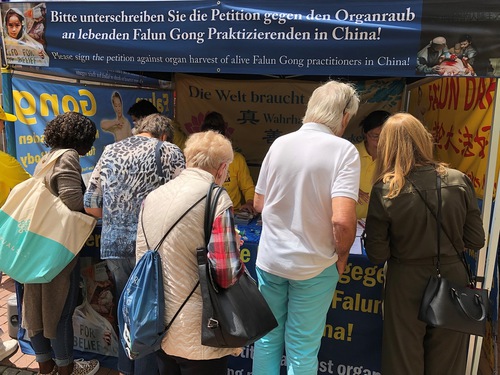 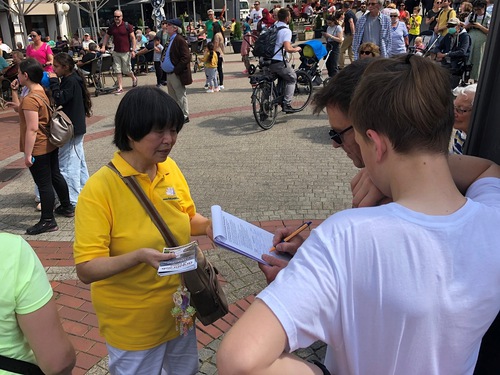 Many locals signed the petition to help end the persecution. 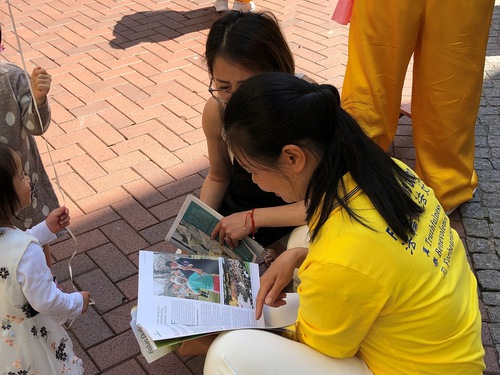 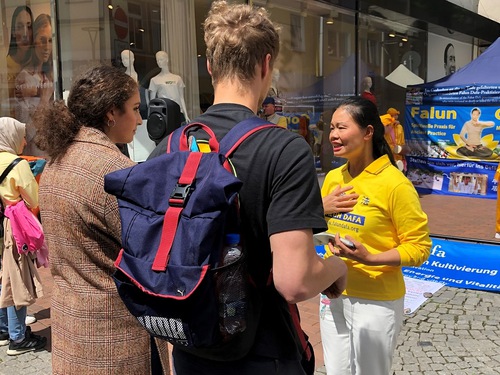 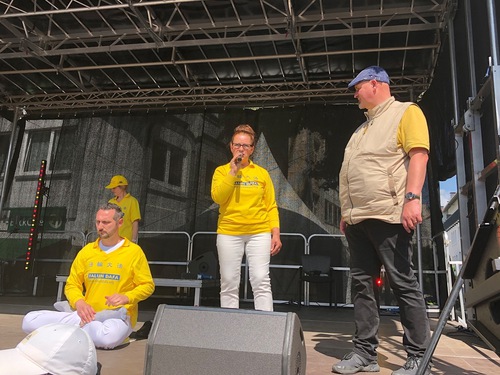 Practitioner Milena tells people how she has benefited from doing the Falun Dafa exercises. 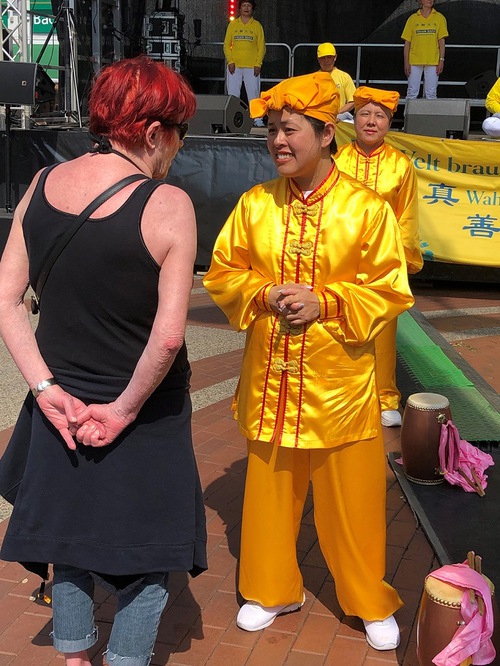 A woman chatted with a waist-drum player and asked about Falun Dafa.

After practitioners played the waist drums, Milena, one of the performers, told how her herniated disc recovered after practicing Falun Dafa. Many in the audience applauded. Practitioners also demonstrated the five exercises. One man said, “I can feel the deeper meaning behind this practice.”

“Truthfulness-Compassion-Forbearance is the essence of human nature.” 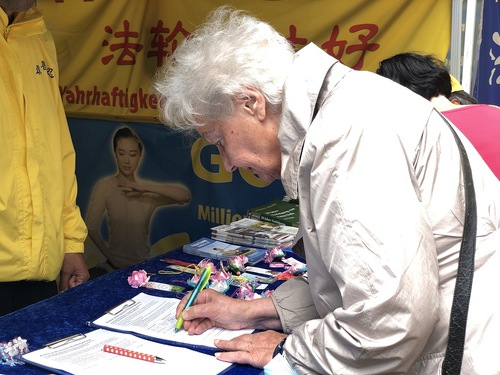 Iris signs the petition to support an end to the persecution.

Iris said that she’d tried many different qigong practices but felt that something was missing. Learning about Falun Dafa’s principles of Truthfulness-Compassion-Forbearance, her eyes teared up and she wasn’t able to speak. She then said, “I believe that a healthy body always has a healthy soul. Truthfulness-Compassion-Forbearance is the essence of human nature. I believe that people with faith always have a healthy mind and spirit.” Iris signed the petition after learning about the ongoing persecution. She also said she wanted to join the local group practice site. 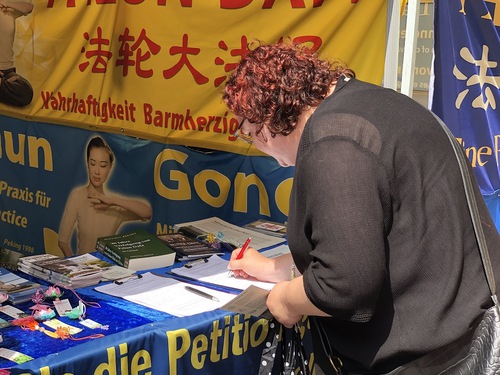 Anja signed the petition to end the persecution.

When Anja signed the petition, she said, “I heard about forced live organ harvesting about three years ago due to my work in which I encounter many immigrants in Germany. I also did some research about forced live organ harvesting. As soon as I saw you here, I came to sign the petition. This shows that the Chinese Communist Party (CCP) is evil because it persecutes people who abide by Truthfulness-Compassion-Forbearance.”

Background: What Is Falun Dafa?
Falun Dafa (also known as Falun Gong) was first introduced to the public by Mr. Li Hongzhi in Changchun, China, in 1992. The spiritual discipline is now practiced in over 100 countries and regions worldwide. Millions of people who have embraced the teachings—which are based on the principles of Truthfulness, Compassion, and Forbearance—and learned the five exercises have experienced improved health and well-being.