(Minghui.org) May 13, 2022 marks the 30th anniversary of Falun Dafa’s introduction to the public as well as the 23rd World Falun Dafa Day. Continuing the tradition with flag ceremonies or colorful lights displayed on landmark buildings, twenty Canadian cities celebrated or will celebrate this important occasion and acknowledge Falun Dafa’s benefits to society this year.

The first flag raising ceremony in 2022 took place at Milton, a town in Southern Ontario, about one hour from Toronto. St. Catharines, Napanee, and North Bay hosted flag-raising ceremonies on May 2nd, 3rd, and 4th.

Deputy Mayor of St. Catharines Thanks Practitioners for Their Hard Work

Officially nicknamed “The Garden City,” St. Catharines is the largest city in Canada’s Niagara Region whose elected officials have proclaimed Falun Dafa Day many times. Deputy Mayor Mr. Carlos Garcia spoke at the flag-raising ceremony in front of the city hall on May 2. He thanked practitioners for their hard work in promoting the principles of Truthfulness-Compassion-Forbearance. 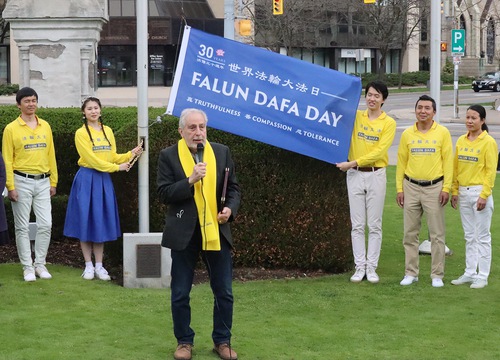 Carlos Garcia, deputy mayor of St. Catharines, read a congratulatory message during the flag-raising ceremony in front of city hall. 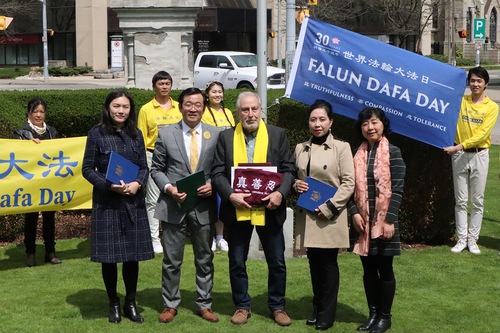 Mr. Garcia talked about his unique experiences during his two trips to China 30 years ago and recently. “I know what you’re doing (clarifying the truth) is important to China and the world. Falun Dafa was introduced to the public 30 years ago and that was about the time I visited China for the first time. I recently visited China again. China is an important country, but I don’t support the CCP regime’s approach.”

Mr. Garcia said it’s an honor to be here on behalf of Mayor Walter Sendzik and the City of St. Catharines.

In conclusion he said, “I think the city of St. Catharines, and indeed Canada as a whole, must support and endorse the principles of Truthfulness-Compassion-Forbearance. We are one of the freest countries in the world, and we are very proud.”

Councilman John McCormack read a congratulatory letter from Mayor Marg Isbester at the flag-raising ceremony in front of Napanee City Hall at 10 a.m. on May 3. Local TV station also reported the event and interviewed practitioners. 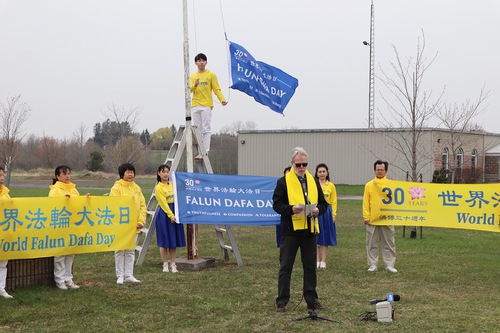 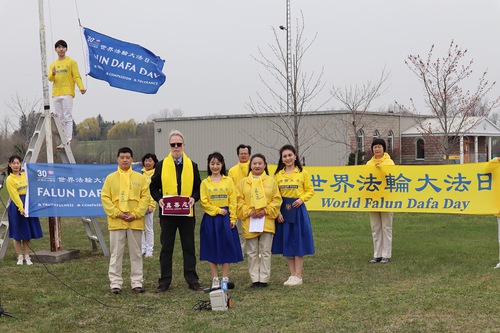 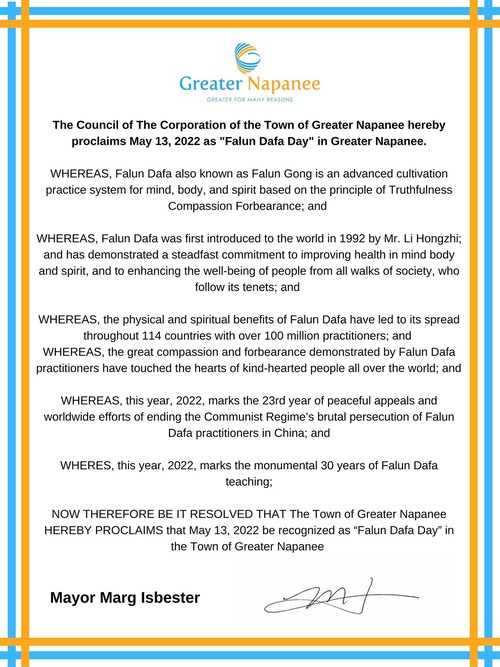 Speaking to the local TV stations and Falun Dafa practitioners after the flag-raising ceremony, councilman John McCormack said he was deeply impressed by the history that practitioners had gone through.

He explained that because he was born after World War II and never experienced suffering like people in other regions of the world, he felt persecution is foreign and distant. To him, Falun Dafa practitioners’ life attitude and lifestyle are very inspirational.

He commented that people who tell the truth are everywhere but the forbearance Falun Dafa practitioners have shown in the face of the CCP’s tyranny displayed the unique character of cultivators. “This is a state that is very difficult for the people of North America to achieve, because we live in a safe greenhouse and have not experienced this. To me, you are an otherworldly group,” he said.

He added, “It’s not difficult to see that a dictatorship always wants to control human life if we look at the current international situation. The first thing that comes to my mind is that Falun Dafa practitioners still go out to clarify the truth, such as spreading the truth through this form, despite the suffering of the persecution, and your message is positive, beautiful and peaceful.”

Mayor of North Bay: Honored to Participate in the Flag-Raising Ceremony

On May 4, practitioners from Toronto participated in the flag-raising ceremony in North Bay. Zhang Pixing, a local practitioner/representative said they met Mayor Al McDonald at the provincial parliament 20 years ago shortly after the persecution of Falun Dafa started in China. They celebrated World Falun Dafa Day at the mayor’s office for the first time 8 years ago and the mayor’s office has been open to them since then. 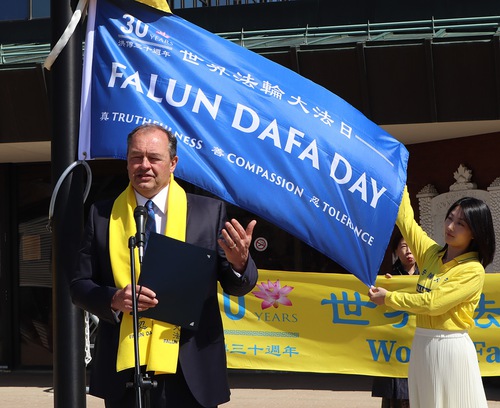 Al McDonald, Mayor of North Bay, speaks at the flag-raising ceremony on May 4.

“I am honored to be here,” said Mayor Al McDonld as he welcomed the practitioners on behalf of the North Bay City Council and residents.

He commented that the residents of North Bay are friendly and considerate and also try their best to help everyone who comes to this city integrate into the community. “So Truthfulness-Compassion-Forbearance is also our belief. We truly believe that as long as we embrace everyone with a broad mind, we will show the best of North Bay,” he added. 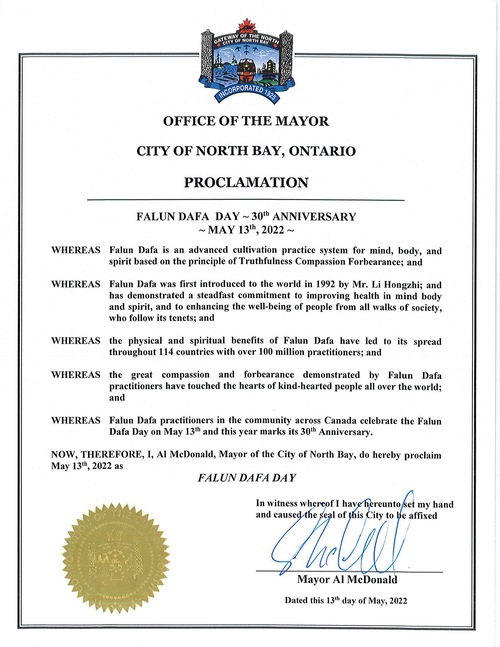 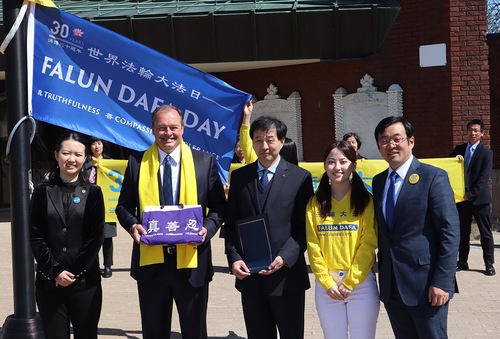 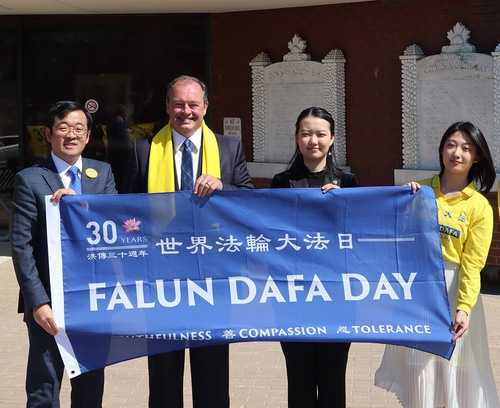 Mayor Al McDonald personally invited Liu Mingyuan (right) to raise the flag, when he heard that her mother Liu Yan was still being persecuted in a Chinese prison for her belief in Falun Dafa. 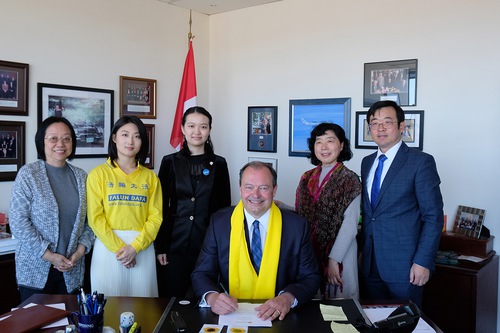 He thanked the practitioners for remembering the meeting in Queens Park 20 years ago after he read the proclamation of Falun Dafa Day. “It has been the 30th anniversary of Dafa’s introduction to the public, and it is your good character that enables the practice to go on for a long time,” he said.

“Mother’s Day Grief: Commemorating Mothers Who Lost Their Lives to the Persecution of Their Faith”