(Minghui.org) May 13, 2022, is the 30th anniversary of Falun Dafa’s public introduction. On April 22, Mayor Olem of the Town of Herndon, Virginia, met with local Falun Dafa practitioners and presented them with a proclamation.

On May 3, Stafford County, Virginia, declared May 13, 2022, “Falun Dafa Day” in the county and invited local practitioners to the county council for the award ceremony.

Proclamation from the Town of Herndon

On April 22, Mayor Olem of Herndon, Virginia, presented a proclamation to practitioners. The proclamation condemns the Chinese Communist Party’s (CCP) persecution of Falun Dafa and asks its residents to avoid getting organ transplants in China and thereby becoming accomplices of the CCP in its harvesting of organs from living practitioners.

Mayor Olem met with practitioners, including a survivor of the CCP’s persecution. Mayor Olem herself works in the health industry and was saddened to learn of the Party’s crime of organ harvesting. She hopes that the proclamation will help stop the persecution and focus people’s attention on it. 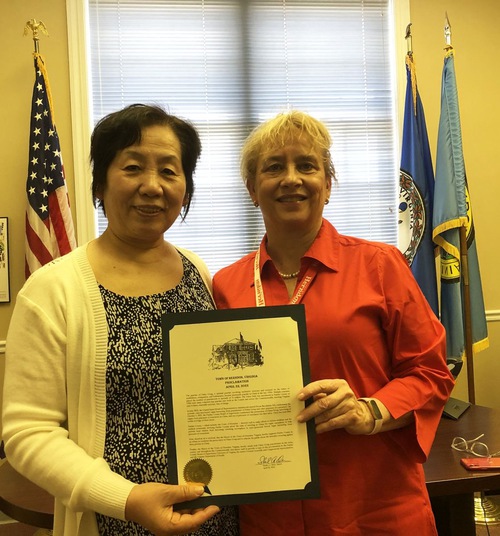 Mayor Olem (right) presents the proclamation to a practitioner.

Herndon is a small town with a large Asian population and is less than an hour’s drive from the capital of the United States. 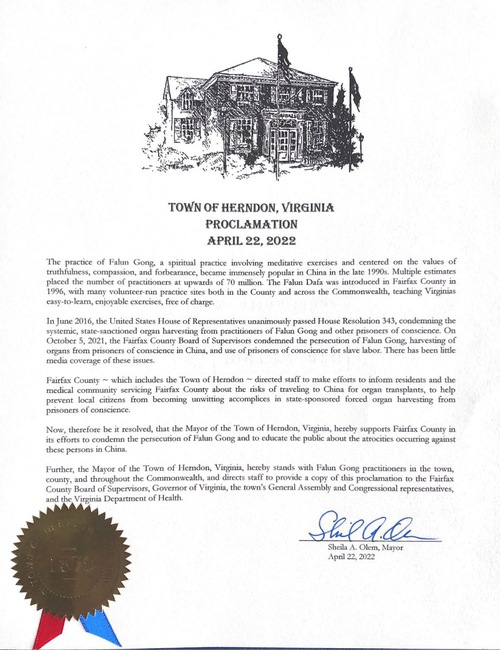 Chairman of the Stafford County Board of Supervisors: “We support Falun Gong and condemn the persecution”

At the meeting of the Stafford County Board of Supervisors, Chairperson Crystal Vanuch addressed the awards ceremony: “We recognize World Falun Dafa Day. Falun Gong is a practice that teaches meditation and the universal values of Truthfulness-Compassion-Forbearance. There are more than 100 million people in the world who practice Falun Gong. Unfortunately, the CCP is suppressing Falun Gong. We honor Falun Gong today to show our solidarity with Falun Gong practitioners and condemn any violence against practitioners.”

Three practitioners accepted the proclamation. They expressed their gratitude to the Stafford government and invited residents to try practicing Falun Dafa, which they said would benefit them physically and mentally. 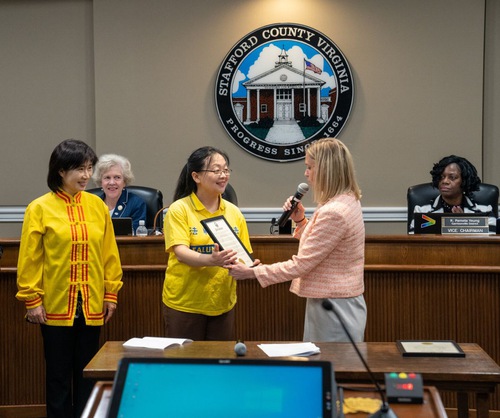 Crystal Vanuch, Chair of the Stafford County Board of Supervisors, presents the proclamation to a practitioner.

The proclamation reads: “Falun Dafa practitioners have shown great compassion and forbearance during the brutal persecution of the CCP regime. Facing this unprecedented persecution, Falun Dafa practitioners have shown peaceful resistance and moral courage, which can change history and inspire the world to confront an increasingly aggressive Chinese regime.”

Two founding fathers of the United States, President George Washington and George Mason, lived in Stafford when they were young. The county is part of the Greater Washington area, with a population of more than 100,000. In 2019, it was named the sixth richest county in the United States. 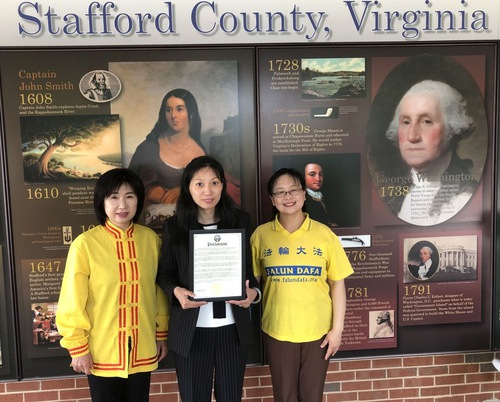 Falun Dafa (also known as Falun Gong) was first introduced to the public by Mr. Li Hongzhi in Changchun, China, in 1992. The spiritual discipline is now practiced in over 100 countries and regions worldwide. Millions of people who have embraced the teachings, which are based on Truthfulness-Compassion-Forbearance, and learned the five gentle exercises have experienced uplifted health and well-being.