(Minghui.org) Mayor Glen Grant and Member of Parliament Eric Duncan of Cornwall, Ontario, Canada, hosted a flag-raising ceremony on May 2, 2022, in front of Cornwall City Hall to celebrate the 30th anniversary of Falun Dafa’s introduction to the public. The “Falun Dafa Day” flag will fly above city hall for one week. 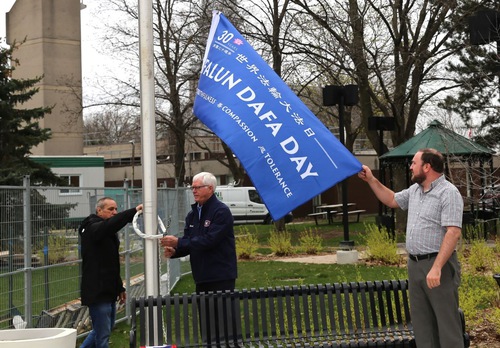 Mayor Glen Grant (center) and MP Eric Duncan (right) of Cornwall, Ontario, raise the flag in front of Cornwall’s City Hall on May 2, 2022. 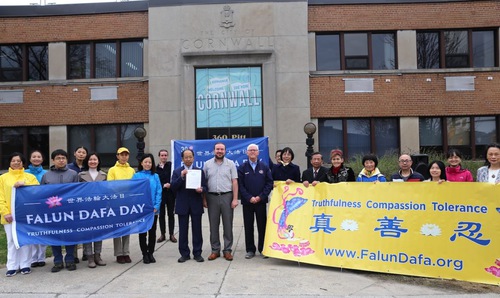 Mayor of Cornwall: Truthfulness-Compassion-Forbearance Are the Virtues We Seek

Mayor Grant said, “The principle of Truthfulness-Compassion-Forbearance is a universal value, but not everyone knows about it. These principles represented by Falun Dafa are well known in our community and in Canada, which is based on such a philosophy.”

“The philosophy of Falun Dafa is the very underpinning of Canada’s (multicultural) canvas. That’s why we encourage people to cooperate based on Truthfulness-Compassion-Forbearance, which are the virtues we seek. We have raised the flag to fit our communities. This is why Falun Dafa is popular. That’s why we have proclaimed Falun Dafa Day (month) for many years.”

He said, “It is clear that a life filled with these principles is what people want. By following these principles, everyone will get along well and respect each other. ” 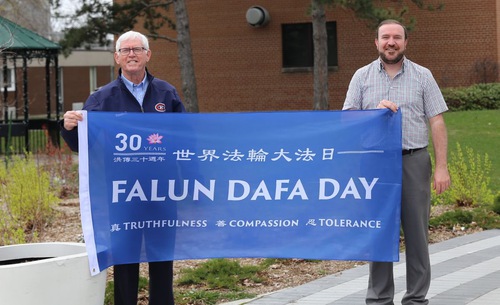 MP Eric Duncan also attended the ceremony and said he came to voice his support. He said, “I came here to express my support and gratitude to the city of Cornwall (for the flag-raising ceremony) for recognizing this wonderful, positive spiritual practice (of Falun Dafa) that is taking place in our country and beyond.” 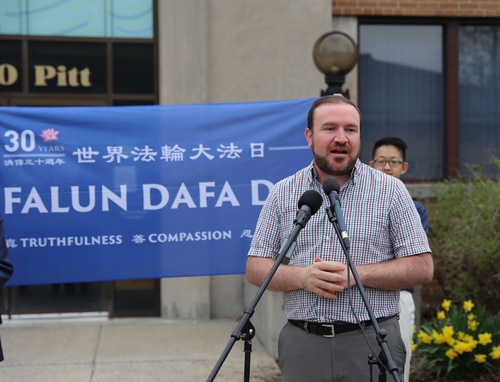 Since he became a Member of Parliament three years ago, Mr. Duncan and his family have noted the peaceful activities of Falun Dafa practitioners on Parliament Hill. He said, “(They) are primarily raising awareness and making Canadians aware of the challenges that Falun Dafa practitioners face in China to the greatest extent possible. Today is one of the opportunities to promote Falun Dafa, so I want to make my voice heard and support them as much as possible.”

MP Duncan expressed his appreciation for practitioners’ dedication. He said, “Thank you so much for making Falun Dafa known again, not only on Parliament Hill but in small towns across Canada, like Cornwall.” 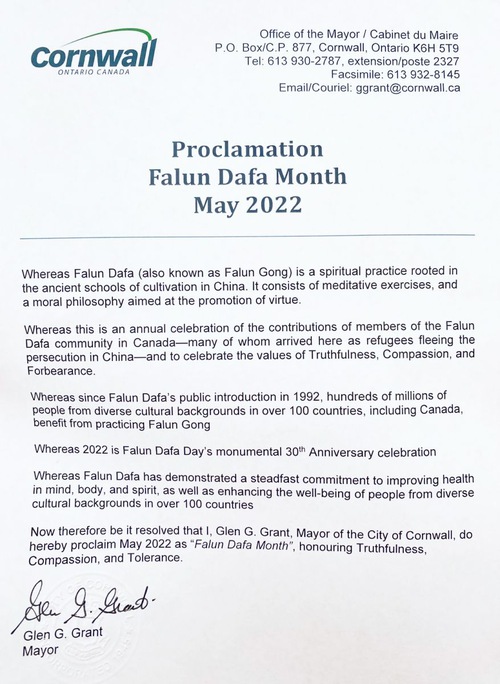 Proclamation from Mayor Grant of Cornwall

Whereas Falun Dafa (also known as Falun Gong) is a spiritual practice rooted in the ancient schools of cultivation in China. It consists of meditative exercises and a moral philosophy aimed at the promotion of virtue.

Whereas this is an annual celebration of the contributions of members of the Falun Dafa community in Canada--many of whom arrived here as refugees fleeing the persecution in China--and to celebrate the values of Truthfulness, Compassion, and Forbearance.

Whereas since Falun Dafa’s public introduction in 1992, hundreds of millions of people from diverse cultural backgrounds in over 100 countries, including Canada, benefit from practicing Falun Gong.

Whereas Falun Dafa has demonstrated a steadfast commitment to improving health in mind, body, and spirit, as well as enhancing the well-being of people from diverse cultural backgrounds in over 100 countries.

Now, therefore, be it resolved that I, Glen G. Grant, Mayor of the City of Cornwall, do hereby proclaim May 2022 as “Falun Dafa Month”, honouring Truthfulness, Compassion, and Tolerance.

The city of Cornwall is the second city to raise the flag, the first being Milton. This year, starting at the end of April, nearly 20 cities will hold flag-raising ceremonies or light up landmark buildings to celebrate the 30th anniversary of Falun Dafa’s introduction and World Falun Dafa Day on May 13 and acknowledge Falun Dafa’s benefits to society.

“Taiwan: Practitioners Express Their Gratitude to Master on World Falun Dafa Day and Wish Him a Happy Birthday”