(Minghui.org) The fifth Falun Dafa Cultivation Experience Sharing Conference was held in Helsinki on Sunday, April 10, 2022, in a festive atmosphere after Covid restrictions were lifted. There were many practitioners, veteran and new, from all over Finland participating in the conference. Some practitioners are the only practitioners in their cities, so this event was a valuable opportunity for them to meet one another and exchange experiences. Nine practitioners shared their cultivation experiences at the conference. 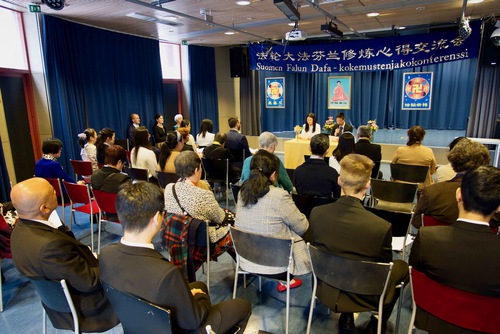 Practitioners from all over Finland attend the Finland Falun Dafa Experience Sharing Conference on April 10. 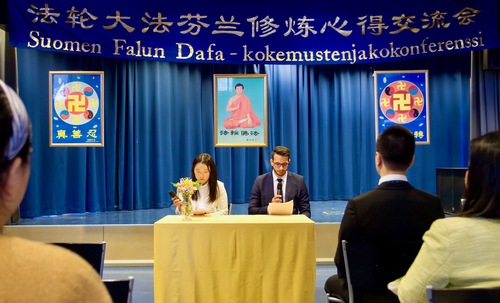 Naza is an Italian-born practitioner and has lived abroad for many years. He started to practice Falun Dafa in 2017 in Canada. A few years later, he moved to Finland for work and shortly after that, a global pandemic broke out due to the CCP virus.

He was surprised by the small number of practitioners in Finland. That’s when he realized how easy it was for him in Toronto, Canada. There were a lot of practitioners and several Fa study groups as well as many activities, so it was easy to participate. Naza shared, “I didn’t have to do anything special; I just had to put on my [Dafa] shirt and participate.” He realized that he was sluggish back then. He thought that perhaps Master Li (the founder of Falun Dafa) had wanted him to come to Finland because help was needed there. He began to work more closely with local practitioners.

Naza also spent a lot of time playing video games. One time, Master allowed him to see an “evil him” playing a game at his desk. It was a horrifying experience. He understood that he needed to pay more attention to how and where to use his computer.

Working in the gaming industry has given him many opportunities to grow. It is a very stressful and laborious environment. A few years ago, he was working on a game where bad people imprisoned and tortured other people and then sold their organs. This gave him the opportunity to clarify the truth to his own team about the persecution in China. Almost all members of his team then signed a petition calling for an end to the persecution.

Finally, Naza thanked Master for the blessings that Dafa has brought to his life. He has gotten rid of many of his bad habits, and has become a calmer, happier person.

Having Righteous Thoughts in a Falun Dafa Activity 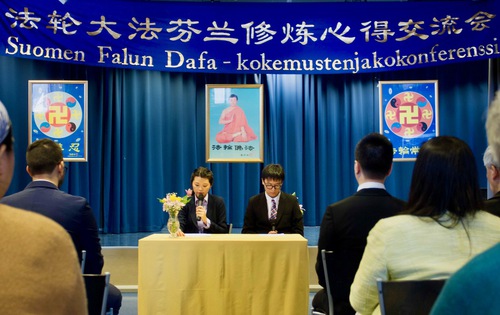 Last fall, the Tian Guo Marching Band was going to be in a parade in Amsterdam. However, it was only a one-day event. Usually, one event lasts for two days. Thao felt that it was not worth going there for just one day because she had to take a Covid test, so she decided not to go. However, things happened that changed her mind.

Thao was on a flight to Paris to join a parade with the Tian Guo Marching Band. Sitting next to her was a man who said he was a life coach from Amsterdam. They discussed health, nature, the cosmos, and the coronavirus pandemic. The man asked where she had obtained all this knowledge. Thao told him that it was from the teachings of Falun Dafa.

She then clarified the truth to him and told him about the events in Paris and Amsterdam. The man asked if Thao was going to Amsterdam. She replied that she did not know yet, and that maybe she would not go. The man said, “You know, everything happens for a reason. Why are you sitting next to me today? And I am from Amsterdam. It could be that you should go to Amsterdam.” Thao was stunned, but not yet serious about going.

Then, a week before the Amsterdam parade, Thao dreamed of a catastrophe in which an earthquake and flood had occurred. People were running away, but no one was safe. She realized it was in another dimension where sentient beings were in danger and needed to be saved. Eventually, she decided to go to Amsterdam and took part in the parade, even though ticket prices had already increased. To her surprise, she found a cheap ticket. Thao was grateful to Master and realized that as long as we have a wish to save people, Master will help.

On the flight to Amsterdam, Thao clarified the truth to a passenger, who then offered her a ride to the hostel in Amsterdam. Thao also introduced Shen Yun Performing Arts to him, and the man gave her his business card and asked her to send him more information. In Amsterdam, amid the pandemic, there were a lot of people on the streets watching the parade, and Thao had the feeling that everyone there was just waiting to be saved.

Shining a Light on Fundamental Attachments and Notions, Cultivating Xinxing 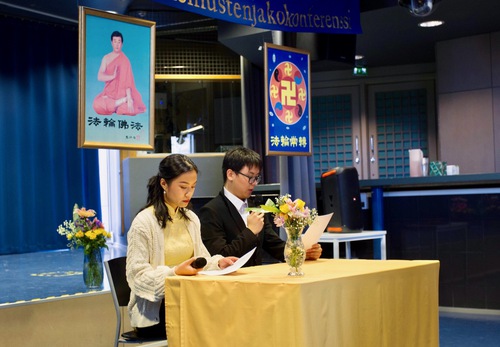 Giang shares her cultivation journey over the last two years.

Giang is a Vietnamese new practitioner who is working in Finland. She began practicing Falun Dafa two years ago and felt very lucky that new as she was, Master had arranged for her to help with a lot of meaningful Dafa projects. During her interactions with fellow practitioners and working on projects, she encountered many conflicts and tribulations where she got angry, did not take responsibility, and criticized others.

At first, Giang didn’t know how to look within, but with the encouragement and guidance from her fellow practitioners, and through honest xinxing sharing with them, Giang was slowly able to find the underlying attachments of self-validation, jealousy, not cultivating speech, and showing-off. These were definitely her fundamental attachments. Multiple incidents like these humbled her in many ways and made her see the importance of xinxing sharing in cultivation.

As a young practitioner, Giang was attached deeply to a man-woman relationship and found herself constantly, unknowingly, looking for potential partners everywhere. This created a complicated qing-related tribulation for her. She described her realization as follows, “I constantly scan my surroundings to find potential partners and send out signals to them. It could be anything from the way I carry myself around them, to an overall inviting, flirtatious energy I radiated outward.” But she realized that if left unattended, this attachment of hers might stir up qing in others, and as a result, interfere with their cultivation and make the whole cultivation environment impure. With this understanding, she corrected her thoughts about and behaviors around the opposite sex. She is now mindful when interacting with them, and follows the guideline, “Keep it civil, and don’t get casual.”

Towards the end of 2021, Giang ordered a set of Dafa books but three months later they hadn’t come. This incident forced her to examine her motivation for cultivation, and whether she truly believed in Master and Dafa. After looking inwards, she found that she didn’t cultivate her xinxing, rather, she held a notion that if she studied the Fa, did the exercises regularly, and suffered hardships she would gain cultivation energy. It also dawned on her that she took saving sentient beings quite lightly. She quickly corrected herself. Even though the books have not yet arrived, she is no longer anxious. “My job is to truly cultivate my xinxing, assimilate to the Fa, and to cherish the Fa,” she said. 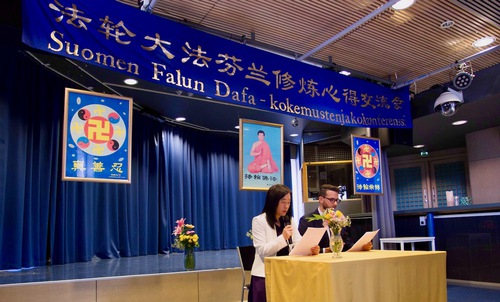 Lily came to Finland in 2009. She shared her experience of many years of participating in the truth-clarification activities. She has learned to let go of herself and cooperate with others in saving people.

There used to be disputes about hanging banners because Lily insisted on doing it her way, with a strong sense of competitiveness. However, she realized that her attachment had become inflated and this was not right, so she put effort into eliminating it. Gradually, Lily became unmoved about how the banners were hung. Other practitioners could hang the banners however they wanted, as long as it could awaken people. She was surprised to learn that when her heart changed, the environment around her improved quickly as well. She and her fellow practitioners even came up with a new, more efficient banner design.

Another incident had to do with English informational leaflets. Lily was in charge of truth-clarification materials. One day, practitioners started to complain to her that there were not enough English materials. Lily got angry and snapped, “Enough, there are not that many foreigners here!”

Then at the next event, Lily did not bring more English materials either, as she didn’t want to listen to others. Through this, she discovered her strong attachment of not wanting to be told what to do. A practitioner ended up taking most of the English leaflets, while others had few or none. In the end, very few English materials were handed out. Lily was very sad seeing that. She shared, “Because of my rebelliousness and not wanting to be directed by others, conflicts arose, and it brought losses to awakening people.” So from then on, Lily made sure to bring more materials and she was determined to let go of her attachments. She was glad to see that the cooperation among practitioners has become better and better over the years.

Lily didn’t speak Finnish well nor did she speak English, and this language barrier made her anxious when delivering the leaflets. One time, a Finnish man asked her many questions, but she couldn’t answer any of them even though she understood them all. At that moment when she was standing there not sure what to do, another Finn, who just signed the petition, explained everything to the man. After this incident, Lily’s righteous thoughts were firmed up a lot. She realized, “I should try to do my best and not overthink things. Sometimes, too much thinking is a hindrance.” She added, “Go wherever you are needed and complete your mission of saving people.”

“Grateful to Cultivate Dafa at this Unprecedented Moment in History”