(Minghui.org) Over the past week, at least 16 countries outside Africa have reported more than 100 confirmed or suspected cases of monkeypox, a rare viral disease rarely found outside Africa.

In addition to the rise of the contagious disease, a severe storm swept across southern Ontario and Quebec within hours on May 21, killing at least nine and leaving thousands of households with no power. A rare tornado swiftly moved through Gaylord, Michigan in the afternoon on May 20, killing at least two and injuring 44. A state of emergency was declared in the area overnight.

Health officials are sounding alarms around the world about rising monkeypox cases in Europe and elsewhere. Over the past week, at least 16 countries outside Africa have reported more than 100 confirmed or suspected cases of monkeypox.

According to the World Health Organization (WHO), available information about the monkeypox cases suggested that human-to-human transmission is occurring among people who have had close physical contact with symptomatic cases.

While there have been no reported deaths from monkeypox infection, the worldwide spread has baffled medical experts.

Oyewale Tomori, a virologist who formerly headed the Nigerian Academy of Science and who sits on several WHO advisory boards, said, “I’m stunned by this. Every day I wake up and there are more countries infected.”

Monkeypox is caused by the monkeypox virus and can cause symptoms including fever, pain, and a distinctive raised rash.

Monkeypox belongs to the same virus family as smallpox, but is much less severe than smallpox. In particular, the West African strain found in one case in the United States had a mortality rate of about 1%. Most people recover fully within two to four weeks, U.S. public health security officials said.

Another conundrum is why most case clusters include men between the ages of 20 and 50, many of whom are homosexuals. Health officials say most of the known cases in Europe are among men who had sex with men.

Most of the cases reported so far have been in the UK, Spain, and Portugal.

The Toronto Star reported that Dr. David Heymann, the former head of the WHO’s emergency department, told The Associated Press that the unusual spread could have originated from sexual encounters at recent gatherings in Belgium and Spain.

An article published in the online edition of the journal Nature on May 20 stated that the number of cases detected outside of Africa in the past week alone – which is almost certain to increase – has already surpassed the total number detected outside the continent since 1970, when the virus was first found to cause disease in humans.

At Least Nine Killed in Severe Storm in Quebec, Ontario

A severe storm swept across southern Ontario and Quebec, Canada within hours on Saturday, May 21, 2022, killing at least nine people and causing extensive damage in the region. Tens of thousands of households still had no power as of Monday morning, May 23.

The local power company Hydro One stated on May 22 that extensive and severe damage to the power grid occurred and crews were working around the clock to repair the power outage. However, it will take a few more days to resolve the outage.

Eight people have been killed by fallen trees across the province, and a woman has become the ninth person to die when her boat capsized while paddling on the Ottawa River, Ontario police said.

Weather experts at Western University said winds could have reached more than 132 kilometers per hour that day.

A state of emergency was declared in the towns of Uxbridge, north of Toronto and Clarence-Rockland, east of Ottawa, due to extensive damage caused by the storm. 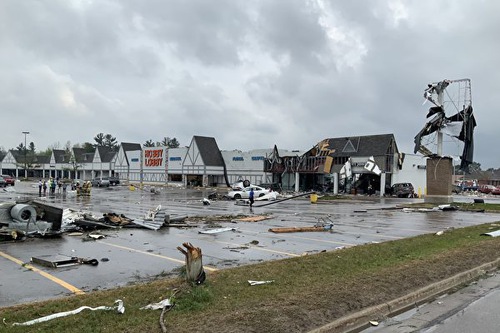 A rare tornado struck Gaylord, Michigan on the afternoon of May 20, 2022, killing two and injuring forty-four. (Picture from Twitter account of Michigan State Police Department)

A rare tornado moved swiftly through Gaylord, Michigan at 3:48 p.m. during a thunderstorm on Friday, May 20, 2022, killing at least two people and injuring 44. Governor Gretchen Whitmer declared a state of emergency in the Gaylord area overnight.

Gaylord City, located about 235 miles north of Detroit, has a population of about 4,200 people. Severe weather is not common in the area.

Lt. Jim Gorno of Michigan’s Department of Natural Resources described the scene in the area as catastrophic, with cars overturned and buildings destroyed.

Gaylord City Council member Jordan Awrey said some establishments and businesses in the area now look like they never existed.

The Associated Press reported that Jim Keysor, a Gaylord meteorologist for the National Weather Service, said in that part of Michigan, strong winds are uncommon because the Great Lakes suck energy from storms, especially in early spring, as the lake water is very cold.

About 35% of utility customers in Otsego County, including Gaylord, experienced power outages Friday afternoon, according to PowerOutage.us.

“After Serving Ten Years and Losing His Father, Sichuan Man Sentenced Again in the Persecution of Falun Gong”

“Podcast (Cultivation): “A Lost Child Finds the Way Back Home””