Thirty years ago on May 13, 1992, Mr. Li Hongzhi, the founder of Falun Dafa, introduced the practice to the public. Falun Dafa is an ancient practice that benefits both mind and body. By word of mouth, Falun Dafa began to gain popularity in China and worldwide and is now practiced in over 100 countries and regions. Zhuan Falun, the main text of Falun Dafa, has been translated into over forty different languages.

Due to the increasing popularity of Falun Dafa, Jiang Zemin, the former head of the CCP (Chinese Communist Party), became jealous and launched a nationwide persecution targeting Falun Dafa. Practitioners outside China began peacefully exposing the persecution and “May 13” became World Falun Dafa Day. Each year, practitioners all over the world celebrate Falun Dafa’s introduction to the world while also raising awareness of the ongoing persecution. 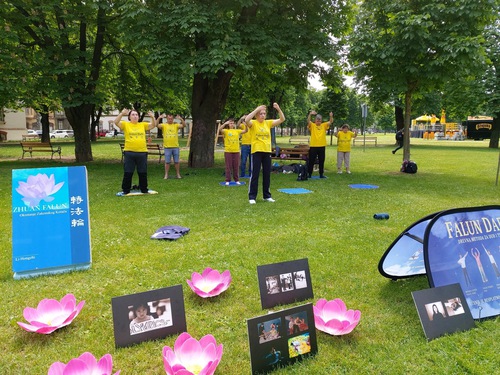 Practitioners arrived at the park and hung up banners, set up an informational table, and demonstrated Falun Dafa’s five sets of exercises.

The park is located near a train station where trains would pass by every couple of minutes. Practitioners’ informational booth was visible to people getting on and off the trains. A lady who was waiting for a train came over and signed the petition to help end the persecution. When a practitioner asked, “What made you decide to sign the petition?” The lady replied, “I don’t need a reason to sign and help!” She signed quickly and got on the train. A practitioner gave her a paper lotus flower through the window of the train. The lady waved and said goodbye.

Niksa, a young man, came by and inquired about Falun Dafa. He asked, “What is Falun Dafa? Why does the CCP persecute practitioners?” He said, “I was on my way to get a cup of coffee with my girlfriend, but was attracted to the peaceful and melodious exercise music. I came by because I was curious about it.” 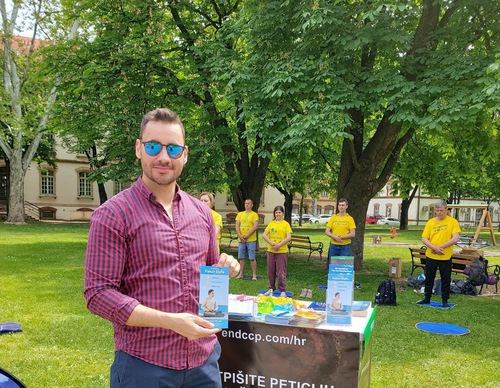 A practitioner explained that Falun Dafa is an ancient cultivation practice that consists of five different exercises. The exercises are gentle and slow and one can practice at home. Practitioners also abide by the principles of Truthfulness-Compassion-Forbearance and hundreds of millions of people have benefited from this practice. Niksa said, “Thank you for telling me about Falun Dafa. I enjoyed chatting with you.”

Upon learning of CCP’s persecution, Niksa signed the petition and continued inquiring about Falun Dafa with his girlfriend. They left after obtaining more information about Dafa.

“I want to document this scene and post it on social media.”

Marina was walking hurriedly when she noticed practitioners and the information booth. She stopped and watched practitioners doing the exercises for a while and asked about Falun Dafa.

She took out her cellphone and said, “I’ve never heard about Falun Dafa. I want to document this scene.” 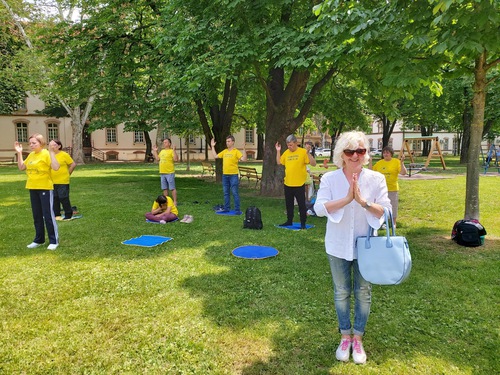 Marina took a picture with the practitioners and said, “I want to document this scene and post it on my social media.”

A passerby said, “Marina is our local preschool teacher. Many people know who she is.” Marina continued, “I will post this on my social media right away. Everyone should come and learn more about this wonderful practice.”

People Sign the Petition to Help End the Persecution

Darko silently read about the persecution on the poster boards and got in line to sign the petition. After signing it, he told practitioners, “I’ve read a lot about the history of China. I know that the CCP has done many bad things. I believe that the persecution is still ongoing in China.”

When a practitioner handed truth-clarification flyers to two school teachers, they told practitioners to distribute them to the children who were with them. The children all asked for a flyer. Practitioners also handed each student a beautiful lotus flower. The students happily said, “Thank you.” 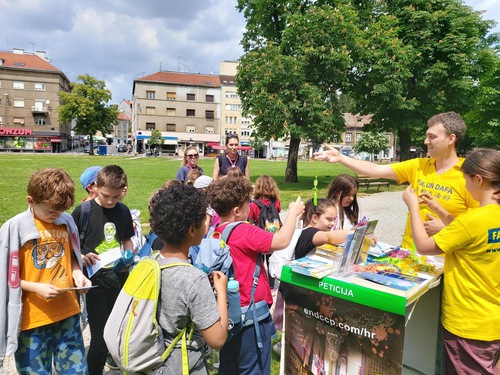 An elderly couple passed by the informational booth and stopped to talk with practitioners. The lady said excitedly, “I know you from ten years ago when I was in the United States!” It turned out that she had seen practitioners in a parade ten years before and learned about Falun Dafa.