(Minghui.org) The South Korean Falun Dafa Association celebrated the 23rd World Falun Dafa Day and the 30th anniversary of Falun Dafa’s introduction to the world on the Seoul Plaza in front of the Seoul City Hall on May 13. Practitioners demonstrated the exercises and held a grand parade.

May 13 is World Falun Dafa Day and also the birthday of Master Li, the founder of Falun Dafa. After an exercise demonstration, practitioners took a group photo to wish Master a happy birthday and express their gratitude to Master for introducing Falun Dafa to the world.

Practitioners went to Seoul Plaza in the early morning, set up a stage, and display banners around the square to help passers-by learn about Falun Dafa.

It was a sunny day. Falun Dafa practitioners from all over South Korea gathered on Seoul Plaza early in the morning to demonstrate the exercises to people on their way to work. Because Seoul Plaza is located in front of Seoul City Hall, surrounded by high-end hotels and office buildings, many civil servants and office workers watched on their way to work. The practitioners wore bright yellow tops and white trousers, which appeared fresh and bright, and formed a contrast with the green lawn beside the square, making the event more eye-catching. 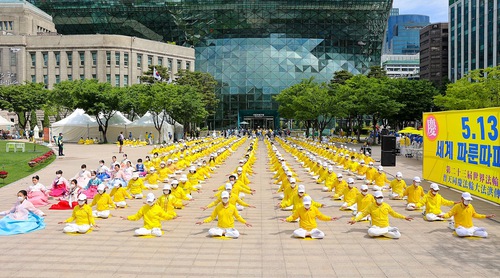 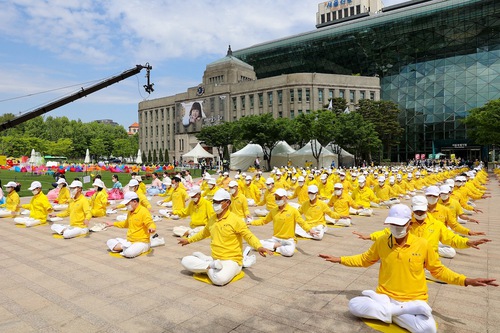 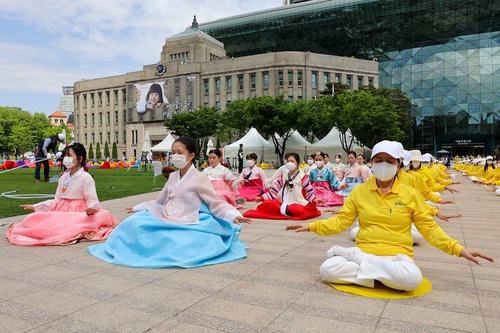 As part of the day’s events practitioners did the exercises on Seoul Plaza on May 13.

Katherine Peterson and Shara Bayram from Germany stopped and watched the exercise demonstration. When asked their opinion, they said they it made them feel relaxed and calm. They praised the graceful exercise movements.

Katherine and Shara, 12th grade students from Germany, arrived in South Korea the previous Saturday and would return to Germany the next day after forming a partnership with a South Korean university as school representatives.

“I’ve never seen such an activity in Germany,” Katherine said, “I am glad to have the opportunity to watch and experience this before returning to Germany.” A practitioner showed them the first exercise. They also learned the hand movements. 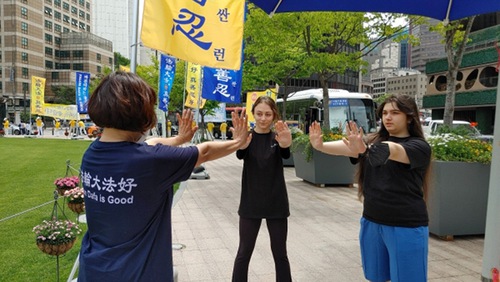 Katherine Peterson and Shara Bayram from Germany learn Falun Gong on the spot.

Immediately afterwards, the practitioners held a grand parade. At 12 noon, the three-kilometer (1.86 mile) parade officially kicked off led by the Tian Guo Marching Band. The parade started from the Seoul City Hall Plaza, passed by the South Korea Information Center, the U.S. Embassy, Government Complex, the entrance of Jogyesa Temple, and the entrance of Euljiro Subway Station, finally returning to the City Hall Plaza. 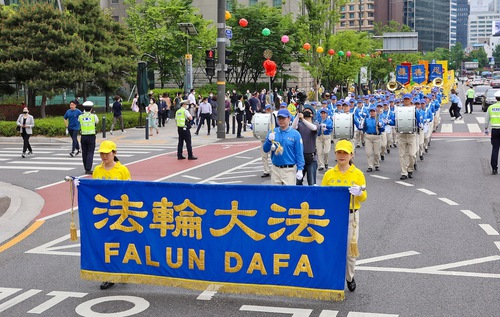 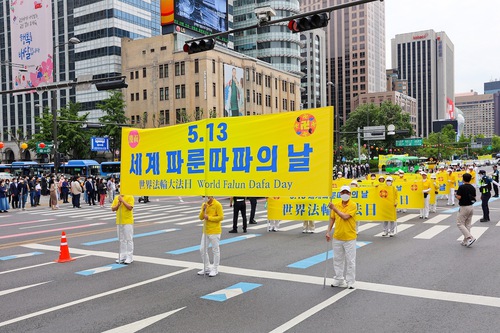 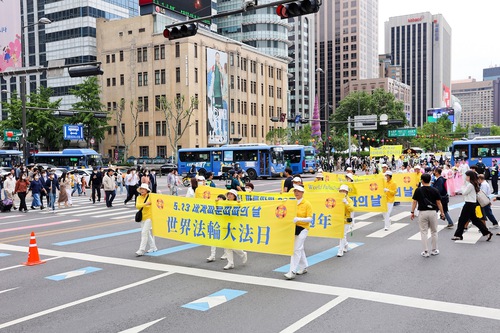 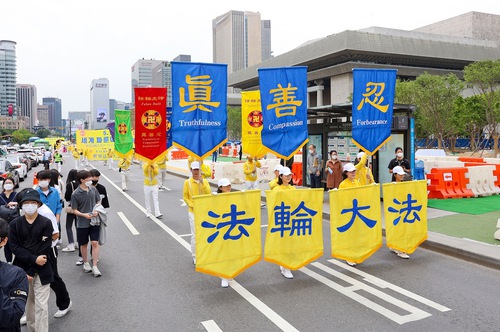 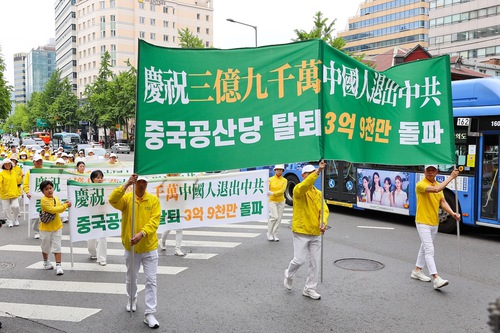 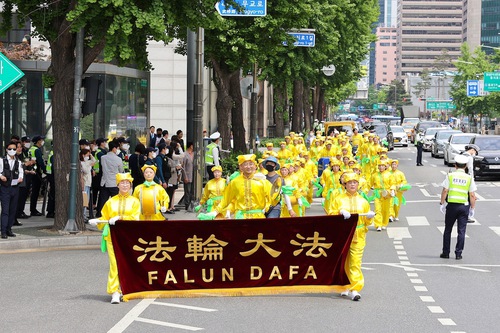 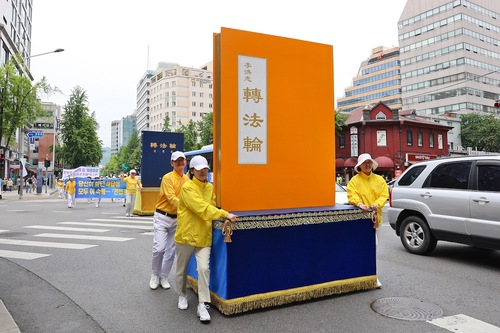 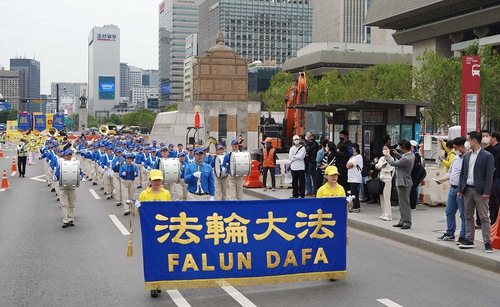 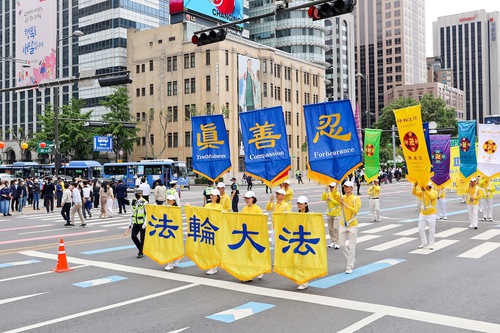 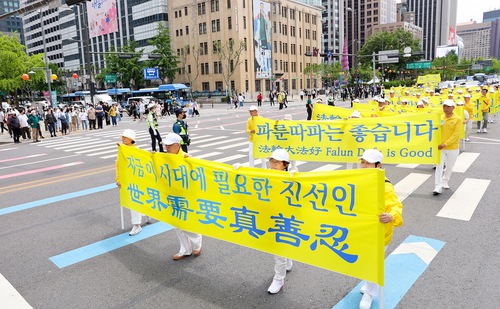 The parade was led by the Tian Guo Land Marching Band, followed by a sculpture introducing Falun Dafa, a large-scale model of the book Zhuan Falun, a Hanbok team, a Falun Dafa exercise demonstration group, a banner team, a waist drum team, the Service Center for Quitting the Chinese Communist Party (CCP) and its affiliated organizations, and a broadcast van. The parade was huge with a total length of more than one kilometer from the beginning to the end.

The parade lasted for about two hours. Many people stopped to watch and took pictures and videos. One reason is that such parades are very rare in South Korea, and the other reason is that among South Korean people, many still do not know much about Falun Dafa.

Li Feng (pseudonym), a Chinese student in South Korea, said after watching the event, “It’s amazing to see such an event being held freely in South Korea. This is absolutely unseen in China.” He also said, “When I was in China, I heard a lot of stories about the persecution of Falun Gong. Later, after I traveled abroad and talked with people, I learned Falun Dafa is good. For the principle of Truthfulness-Compassion-Forbearance, the whole world needs it.”

Chinese exchange student Li Ying (pseudonym) will return to China in June. After watching the parade, he said, “I heard that Falun Dafa is a good practice for uplifting morality and improving health. I also want to learn it.” He also said he wished that the CCP would stop persecuting Falun Dafa. 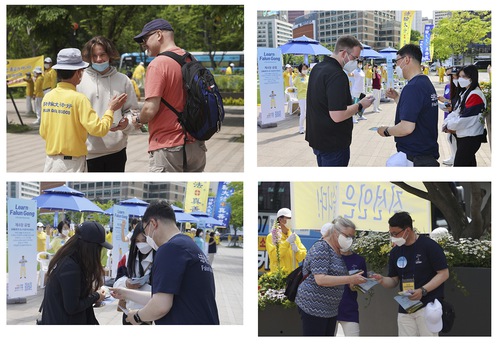 Practitioners tell people about Falun Dafa and how the CCP is persecuting it.

After watching the parade a Vietnamese girl named Dotinam said, “A friend of mine used to be in poor health, but after practicing Falun Dafa, she became very healthy. Seeing my friend’s change, I feel that practicing Falun Dafa has many benefits. I also want to learn it.” 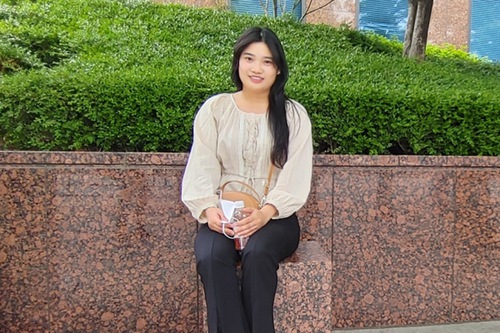 Dotinam specially traveled to Seoul to watch the parade.

Dotinam moved to South Korea with her family ten years ago and settled in Dangjin City, Chungcheongnam-do. She travled to Seoul to watch the event after hearing from a friend who has practiced Falun Dafa for many years.

She said, “My friend’s mood has become better and her personality has improved after practicing. I want to read the book Zhuan Falun. I placed an order online and it will arrive soon. I heard that reading Zhuan Falun repeatedly will make the mind clearer and the mood better.”