(Minghui.org) May 13 is World Falun Dafa Day and this year is the 30th anniversary of Falun Dafa’s public introduction. Practitioners from Belgium and the waist drum team from the Netherlands celebrated the special day on the bustling commercial center square in Brussels on May 14, 2022.

The sun shone brightly in the clear blue sky as practitioners wished Master a happy birthday. Hearing the music, gongs and drums on the square, many passersby gathered to watch the performances and cheered and applauded. 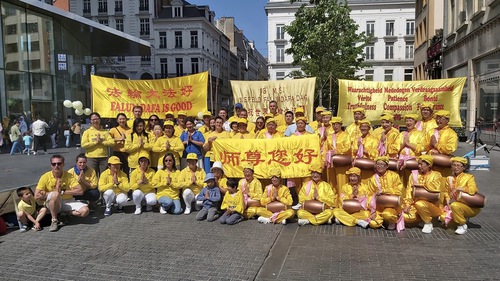 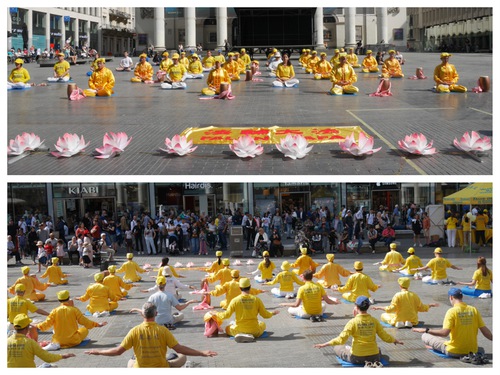 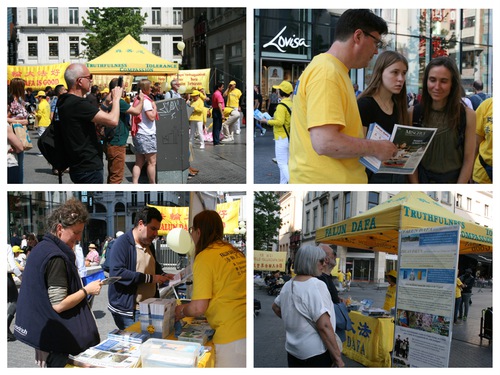 Public Commends the Principles of Truthfulness-Compassion-Forbearance

She said excitedly, “I was attracted by a kind of compassionate power. I was in the distance with the children and felt such a call. So I hurried over here. I think this [Truthfulness-Compassion-Forbearance] is what people need. People need a lot of this [compassionate] energy.” 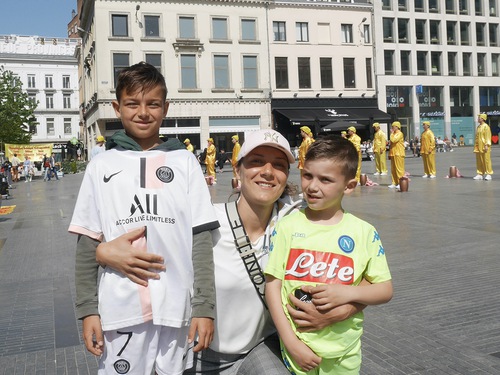 Amissa and her children

She added, “Their performances are both peaceful and beautiful.” When she learned that it was Falun Dafa practitioners celebrating World Falun Dafa Day, she asked what Falun Dafa was, and learned that there are practitioners in many countries around the world, but it is persecuted in China. She said she planned to learn more.

Jarne from Belgium and his girlfriend watched in front of the crowd. He said that the music was really good. He read the words on the banner and said, “Truthfulness-Compassion-Forbearance is beautiful.” 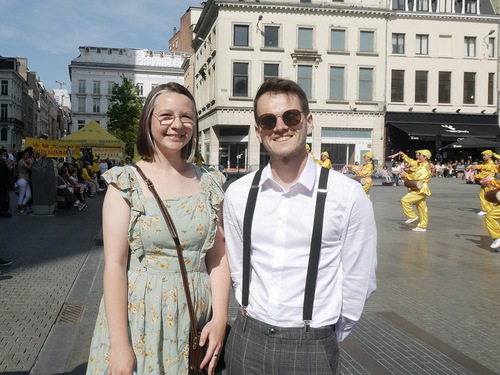 Jarne and his girlfriend

Two women, Solène and her friend Manon from France, happily applauded the waist drum team’s performances. Solène said, “They are really graceful and we love them. You see they are always smiling. The values written on the banner are the best.” 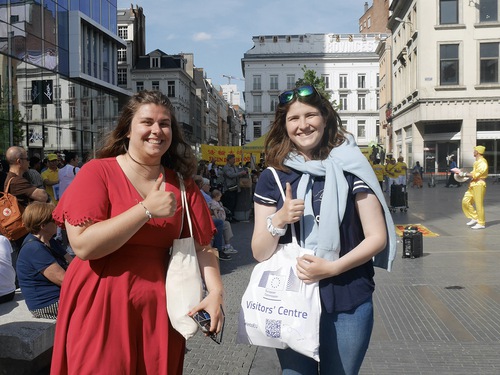 Solène and friend Manon from France

An elderly couple in their 80s sat on a bench and happily smiled as they watched practitioners’ performances. The man said, “It’s amazing. It’s beautiful.” He explained that he went to China 20 years ago and admired China’s traditional culture. His wife mentioned human rights and said the Chinese Communist Party (CCP) was terrible and violated human rights. 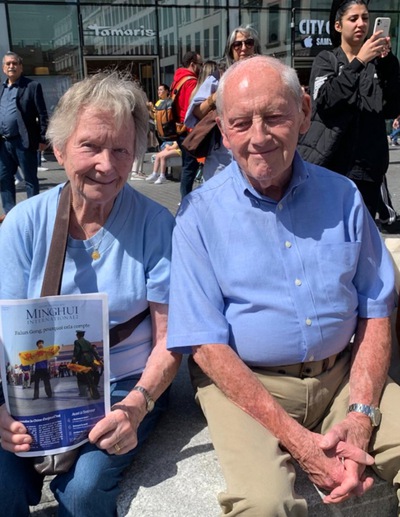 An elderly couple enjoyed the performance.

Kelly lingered at the exhibition table for a long time and chatted with a Falun Dafa practitioner. She said, “I think Falun Dafa is very beautiful. It looks very calm and peaceful.” 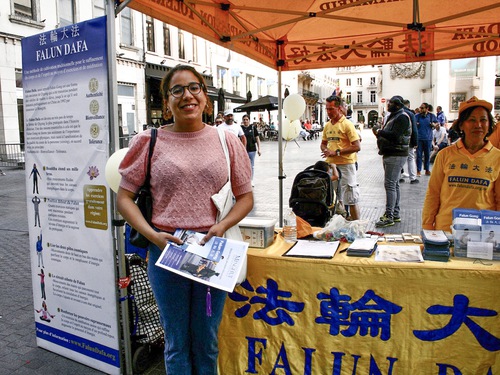 She said her mother meditated too, but it was not the same. “I’m very interested in trying Falun Dafa,” she said, “It’s too bad that the CCP persecutes such good people. They should be allowed to have freedom of belief. It’s terrible that CCP restricts their thoughts. China is beautiful, but such a persecution occurs. The CCP is crazy.” She also said that everyone should follow Truthfulness-Compassion-Forbearance.

Kati, a yoga enthusiast, and her daughter read the information about Falun Dafa at the exhibition table, and were interested in learning about Falun Dafa from the practitioners. She smiled and said, “I like Falun Dafa very much. Falun Dafa is so quiet, peaceful, and real.” 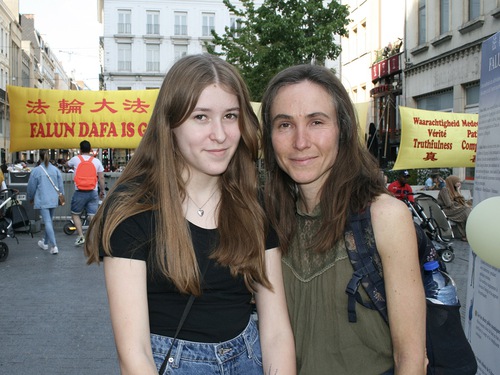 Kati said she practiced yoga every day, but she wanted to try Falun Dafa. She said, “I like to learn about other spiritual information so that I can expand my horizons. I really like Falun Dafa.”

Marina Pasenkova and a Ukrainian friend lingered at the exhibition table for a long time. Ms. Pasenkova asked practitioners questions about Falun Dafa and translated for her Ukrainian friends, who stood there watching and reading the display boards with great interest. 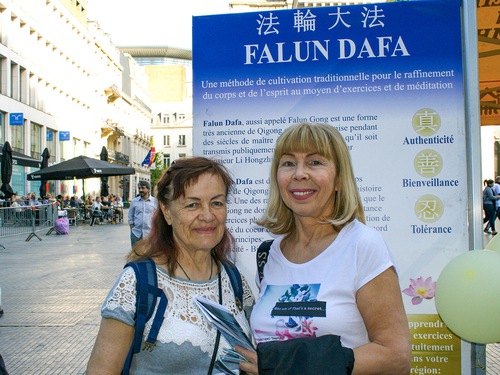 She asked a practitioner how to learn Falun Dafa. When the practitioner told her that in the park in the center of the city, someone would teach the exercises for free every Sunday morning, and they would meditate together. She said that she and her Ukrainian friends would go there to learn. The Ukrainian friend next to her nodded happily.

German student Tasia and her friend sat down behind the practitioners and meditated with them for more than ten minutes. She said, “We saw them sitting here meditating, so focused and peaceful in a noisy environment. I just wanted to sit down with them and experience it.” 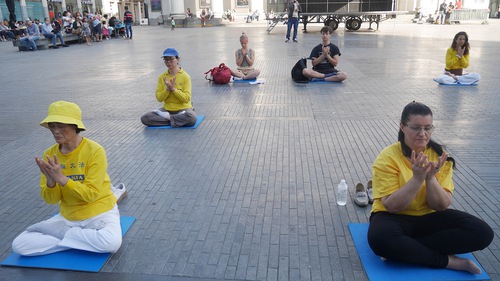 German student Tasia (beside the red bag) and her friend meditate with practitioners.

Tasia said that it was difficult for her to understand that people would be persecuted because of their practice of Truthfulness-Compassion-Forbearance. She asked the practitioner for the address of the Minghui website and hoped to get more information online.