(Minghui.org) May 13 is World Falun Dafa Day and this year is the 30th anniversary of Falun Dafa’s introduction. Mayor Kayce Munyeneh of the Town of Cheverly issued a proclamation to commemorate the occasion. 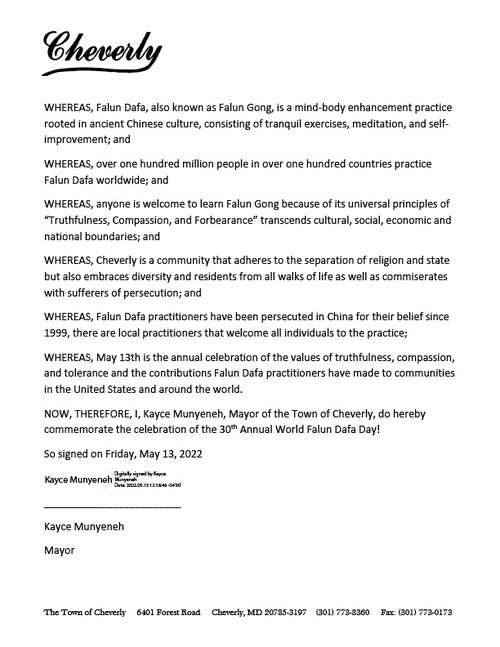 Proclamation from Mayor Kayce Munyeneh of the Town of Cheverly

The proclamation reads, “Anyone is welcome to learn Falun Gong because of its universal principles of ‘Truthfulness, Compassion, and Forbearance’ transcends cultural, social, economic and national boundaries; and

“Cheverly is a community that adheres to the separation of religion and state but also embraces diversity and residents from all walks of life as well as commiserates with sufferers of persecution; and

“Falun Dafa practitioners have been persecuted in China for their belief since 1999, there are local practitioners that welcome all individuals to the practice.”

“Clarifying the Truth to Police Officers”