(Minghui.org) On May 8, 2022, Falun Dafa practitioners from Rome and neighboring cities came to Rome’s city center to celebrate World Falun Dafa Day. They demonstrated the Falun Dafa exercises and told people about the persecution in China. 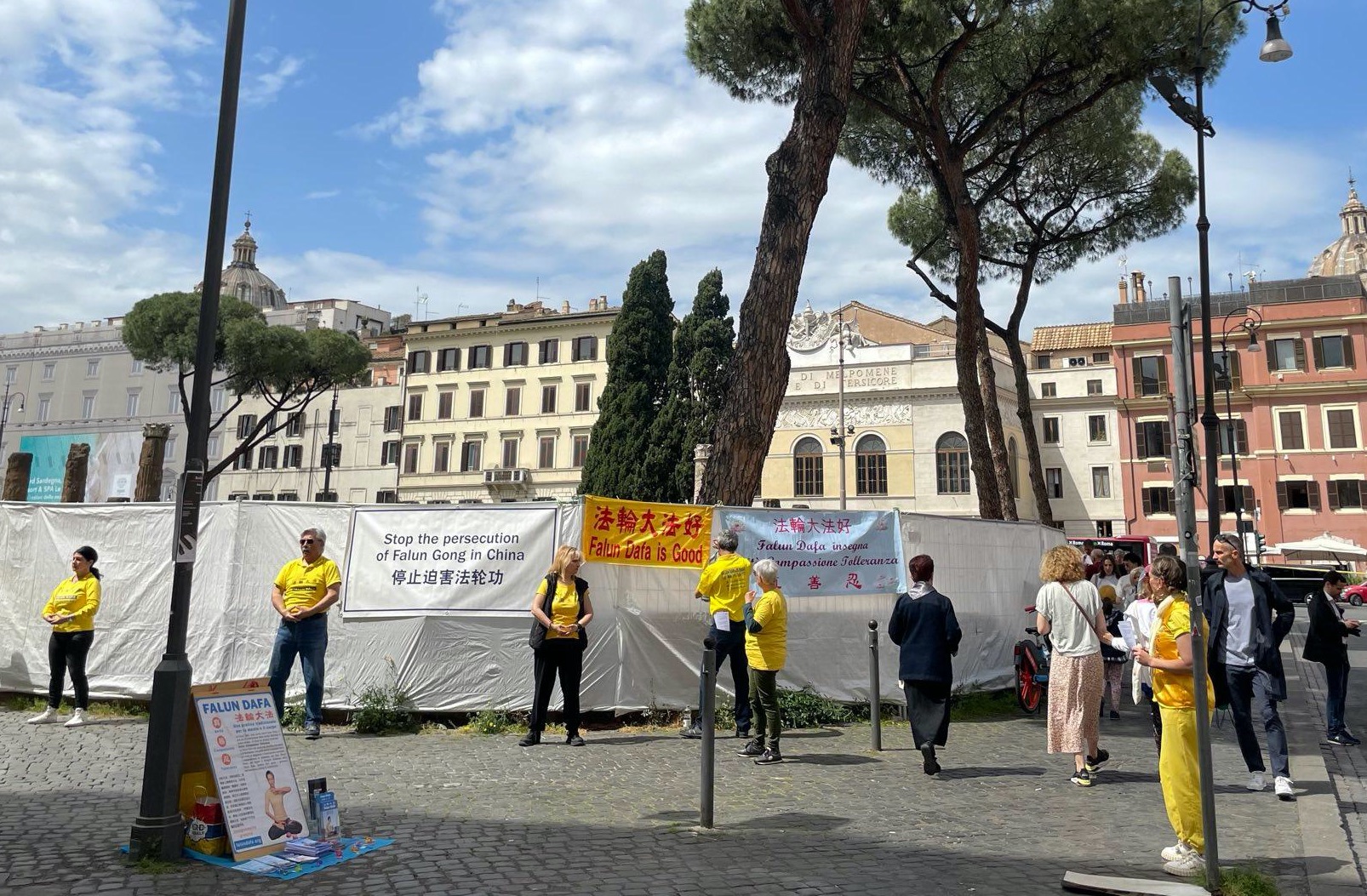 Practitioners introduce Falun Dafa in the center of Rome on May 8 to celebrate World Falun Dafa Day.

After almost two years of global travel restrictions caused by the pandemic, Rome is now finally coming back to life. The event was held at the Largo di Torre Argentina in the center of Rome. This is one of the most popular spots for tourists from all over the world.

Many people stopped to watch as practitioners did the exercises, and some locals said they will come to the group exercise site on Sunday mornings to learn. After learning about the special date of “May 13 World Falun Dafa Day,” many people congratulated the practitioners on the 30th anniversary of Falun Dafa’s public introduction.

Several practitioners shared the positive changes they experienced as a result of practicing Falun Dafa, and expressed their heartfelt gratitude to Master Li. 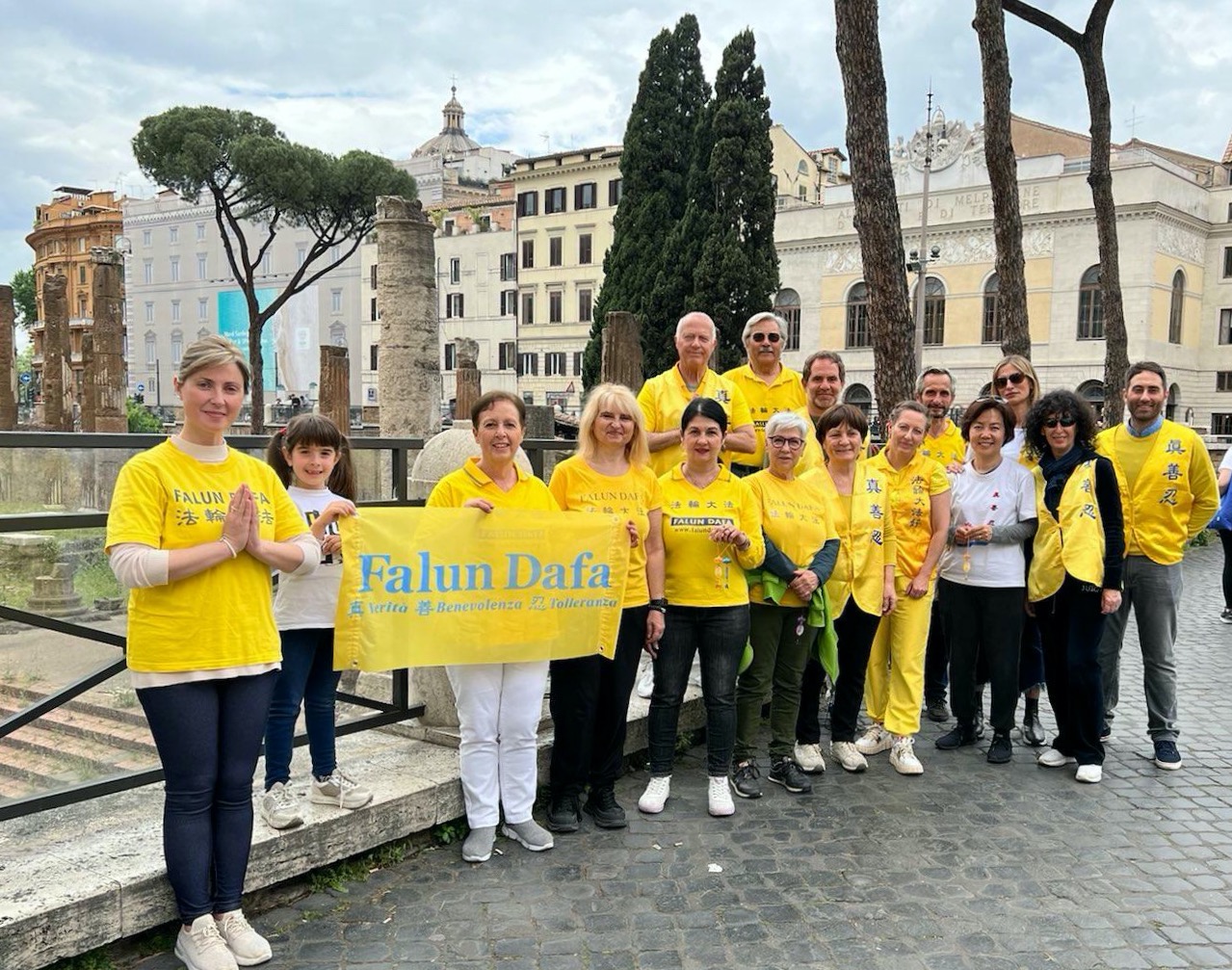 Practitioners wish Master Li a happy birthday at the end of the day's event.

Francesca said that practicing Falun Dafa has made her family warm and harmonious. She said that when she married she imagined a warm, harmonious, and romantic life as a couple, hoping that her husband would be a model husband and support her unconditionally. But the reality was not like that. Whenever her husband objected to something or didn’t do what she wanted, she became resentful and quarrels became a common occurrence. The situation finally became so serious that she even thought about divorce.

But through studying the Fa and talking with other practitioners, Francesca realized that she was selfish, always forcing others to do things, never thinking about what was wrong with herself. At the same time, she understood that as a practitioner, she should think of others and should not impose her ideas on others, even if she was right.

So she completely let go of the idea of a model husband, and instead gave her spouse more affirmation and freedom. She found that her husband began to change and naturally did what she wanted. This was something that never happened in all the years they were married.

Now her family of three is filled with happiness and laughter every day. Francesca thanked Mr. Li Hongzhi and Falun Dafa from the bottom of her heart for making her family so happy.

Understanding the Principle of Gaining without Seeking

A Chinese practitioner who has lived in Rome for seven years said that she used to have a competitive mentality and was very jealous. Even though she already had a lot, she was never satisfied. Practicing Falun Dafa has helped her understand the Fa principle of gaining without seeking.

“Through cultivation practice, I understand that people’s lives are arranged. What is yours will not be lost, and there are gains and losses. You can’t insist on getting things because you may hurt others in the process and thus create karma,” she said. “It’s about doing what you should do, whether it’s work or study, just do your best without being attached to the results. Master tells us to look inward in everything. I need to improve myself and be kind to others. When I no longer have thoughts of comparing myself with others, and I’m no longer jealous, life becomes easy and I am satisfied.”

Another practitioner named Francesca, said, “After the pandemic shutdown and we’re once again in the middle of the crowds, it’s a wonderful indescribable feeling of freedom. Many tourists and local residents were very happy to receive the flyers we hand out. Talking freely with people, showing them the exercises and telling them about Truthfulness-Compassion-Forbearance makes me feel we are all so fortunate. It just feels like we’re moving from a dark corner into the light.”

It seems that tourists and local residents are becoming more open-minded than before, with many people coming forward to receive flyers. A student from China talked with practitioners for a long time. He said he wanted to listen to many voices, not just news from China so that he could make a correct judgment.

“San Francisco: A Sight to Behold in Celebration of World Falun Dafa Day”