(Minghui.org) May 13, 2022, was World Falun Dafa Day and the 30th anniversary of Falun Dafa’s introduction to the world. Several representatives from the Michigan Falun Dafa Association went to the State Capitol in the City of Lansing on May 12 to receive Michigan Senate Resolution 126 from Senator Dale W. Zorn. The resolution recognizes May 13, 2022, as Falun Dafa Day.

Senator Zorn said that the principles of Truthfulness-Compassion-Forbearance are indeed what society should have and are noble values. He said that these principles are also an important factor in enabling a community to sustain its own prosperity and development. 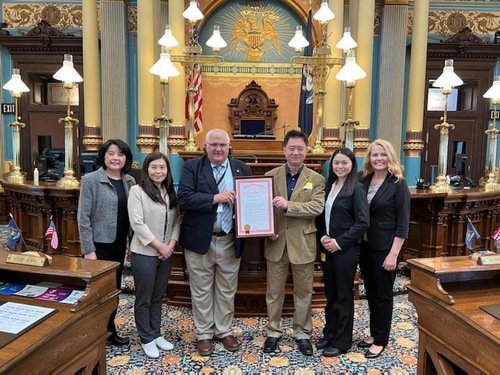 Regarding the Chinese Communist Party's (CCP) more than 20-year-long persecution, Senator Zorn said it was important for the Western world to understand how other governments respond to their people. There are still governments who persecute their own people.

The senator said that he wished people would remember those who were persecuted in China and across the world. He added that persecution should not happen and we need a world with mutual understanding. 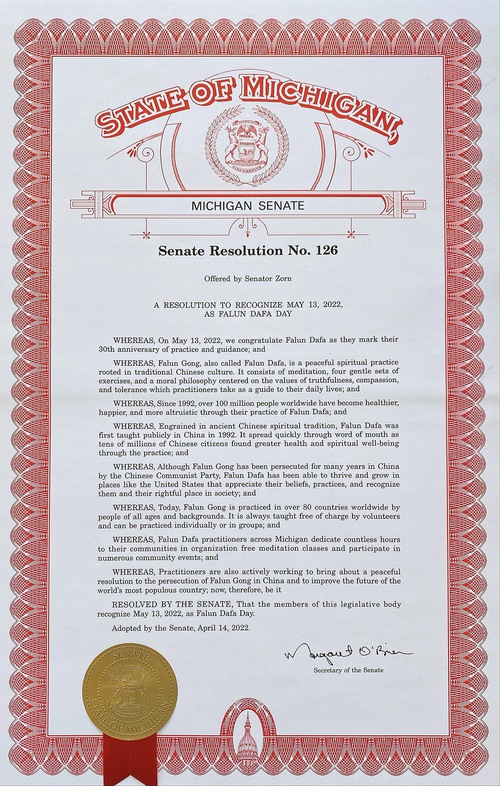 The resolution was sponsored by Senator Zorn. The resolution reads, “Although Falun Gong has been persecuted for many years in China by the Chinese Communist Party, Falun Dafa has been able to thrive and grow in places like the United States that appreciate their beliefs, practice, and recognize them and their rightful place in society.”