(Minghui.org) Falun Dafa practitioners in Taichung did the exercises on the square in front of the Taichung City Government building on the afternoon of May 8, 2022, to celebrate the 30th anniversary of the day Falun Dafa was introduced to the world. The date coincides with the 71st birthday of Falun Dafa’s founder, Mr. Li Hongzhi.

To celebrate the 23rd World Falun Dafa Day, which falls on May 13th every year, practitioners of all ages and walks of life reflected on their cultivation experiences and how they’ve been blessed by the practice. 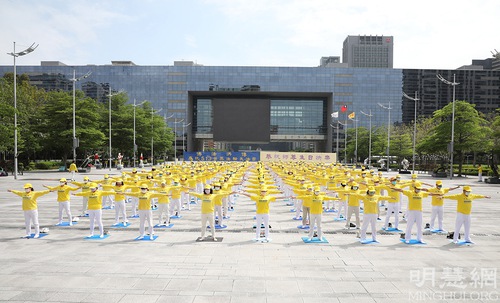 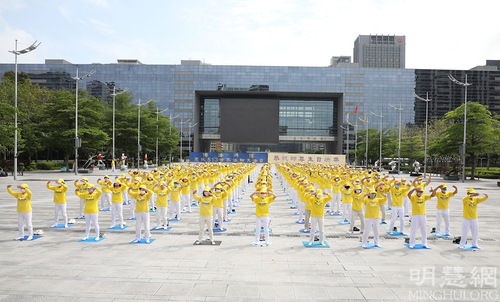 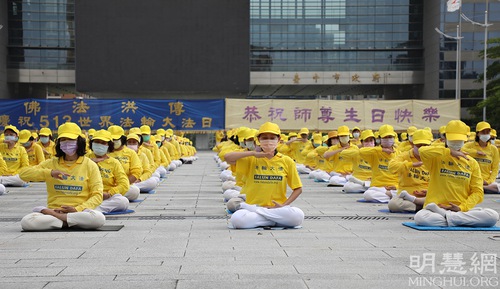 As part of the day’s Dafa Day celebration events, practitioners did the exercises on the square in front of the Taichung City Government building. 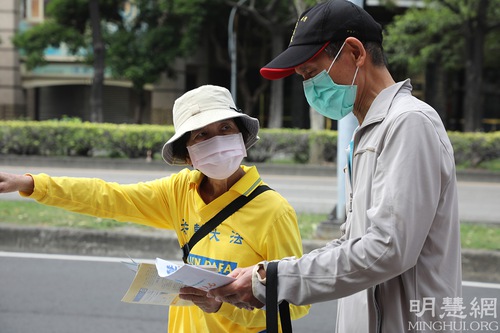 Falun Dafa is a spiritual practice that is rooted in the Buddhist tradition. It was introduced in China by Mr. Li Hongzhi in 1992. Its practitioners include all ages – middle-aged and elderly people, children and teenagers, as well as people in the prime of life. As these practitioners have gained benefits both physically and mentally, they hope to let more people know how wonderful Falun Dafa is. 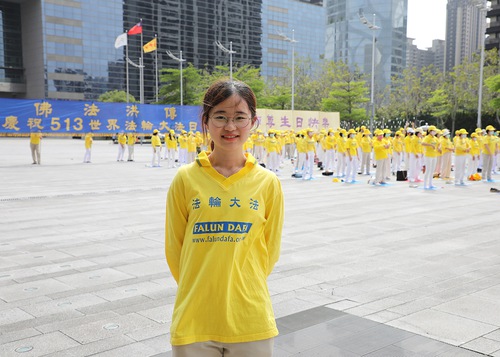 Wang Qiongyi, who will start working as a doctor in August, suggests people learn Falun Dafa.

Wang Qiongyi, who has just graduated from the China Medical University with a double degree, said, “Cultivation is the truly correct path in life,” and that cultivating in Falun Dafa “can help elevate one’s life to become a better person.” From a medical professional’s point of view, she recommends that people come and learn Falun Dafa.

When Ms. Wang was young she practiced Falun Dafa with her mother. However, she says she truly started on her path of cultivation in the 4th year of her university studies. She said that the stress from the exams was great and as a result she suffered from insomnia and heart palpitations. “I felt lost,” she said. All of these problems got her to start thinking, “What is the meaning of life? What is the purpose of this lifetime?” A memory deep within her heart led her to pick up Zhuan Falun once again.

Through studying Zhuan Falun and practicing the exercises, Ms. Wang’s insomnia and palpitations disappeared. Through cultivation, she found the true meaning of life. Ms. Wang said that there is a lot of information flying around in this modern society. All sorts of philosophies, movements, and trendy cultures prevail. People tend to get lost in all that information. The young people all around her face this issue. She learned that all these pursuits are not the fundamentals and realized that “Cultivation is the truly correct path in one’s life.” Ms. Wang cited herself as an example. She thought that she was not a selfish person. However, after starting Dafa cultivation, she realized that she only does well in her own things but never cares about others; and she also goes her own way when she does things. Now, she cares about others and puts herself in their shoes to think about problems. She said that cultivating in Dafa “can help elevate one’s life to become a better person.”

Ms. Wang, who holds a major in Chinese and Western Medicine, recommends that people come and learn Falun Dafa. As the Traditional Chinese Medicine theory states, “Anger harms the liver while joy harms the heart.” She said, “Falun Dafa can help people face difficulties with a calm mood, and one’s mind and body will also improve because of that.”

Musician: Sharing the Goodness Of Truthfulness, Compassion, and Forbearance Through Performances 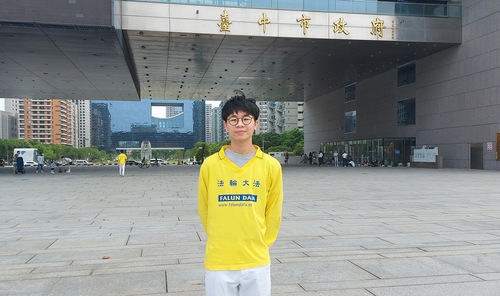 Musician Lu Chenghan hopes that more people can come and feel the goodness of Truthfulness, Compassion, and Forbearance.

Lu Chenghan, 26, a professional musician and music teacher, learned about Falun Dafa through his friend during the third year of his university studies. Falun Dafa’s principles of Truthfulness, Compassion, and Forbearance guided him in his speech and behavior and they also serve as a guide for his direction in life, helping him to become an even more sincere and kind person.

Mr. Lu shared that before cultivation, he always had worries when he interacted and spoke to other people as he was afraid he wouldn't speak well, that others might not acknowledge him, or that he might be misunderstood. However, after practicing Dafa, he is able to, “Treat others sincerely and think from their perspective.” Mr. Lu discovered that he’s become friendlier and he also has more wisdom.

Mr. Lu’s family saw the changes in him after he began abiding by the principles of Truthfulness, Compassion, and Forbearance to improve his xinxing, speech, behavior, and attitude. They now say, “Falun Dafa is really good,” and they are very supportive of his cultivation. 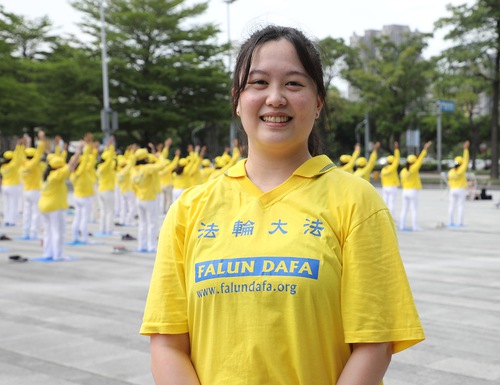 Yang Yizhen’s university classmates say that she is popular and kind.

Yang Yizhen just graduated from university last year and says that the greatest benefit she derived from cultivating was that she got rid of her bad temper. In the eyes of her university classmates, she is a popular and mild-mannered girl. Everyone likes to be friends with her. However, when Ms. Yang was younger she refused to admit her mistakes, refused to apologize, and had a bad temper. She said that this changed after she truly started cultivating herself during the first year of her university studies.

Ms. Yang encountered a bottleneck in her dance studies that she could not overcome. She realized it was time to practice Falun Dafa seriously. During the process of reading the Falun Dafa books, she understood that the root cause of her not being able to have a breakthrough is that she was worried that she would not dance well enough or that she might get hurt in the process. She realized that this was an attachment to gain, loss, fame, and self-benefit. These attachments caused her mind to tense up so she could not do her best. When she realized this, her thinking started to change and her body became very light. As she continued to read Master’s lectures, Ms. Yang discovered that “the root cause of all conflicts and problems originates from herself.” She became willing to admit her mistakes and apologize.

Her classmates all praise her for having a good temper and being considerate of others. Ms. Yang observed that her words and behavior also influence her peers. Now they avoid making dirty jokes in front of her.

Learning to Look Within 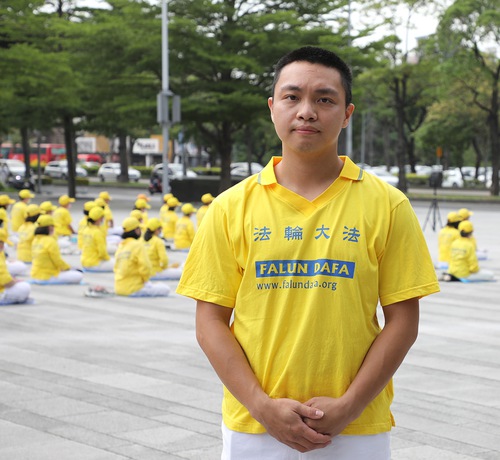 After more than 10 years, Chen Luyun found Dafa once again.

Chen Luyun was born in 1992, the year Dafa was introduced to the world. He practiced Falun Dafa with his mother when he was young. After stepping away for more than 10 years, he once again found Dafa and took up the path of cultivation.

Mr. Chen said that after the COVID pandemic outbreak, he suddenly felt that time was passing quickly and memories of when he practiced Falun Dafa kept resurfacing. He began searching for a practice site. After going through some trouble, he finally found one. That day, he did all five exercises.

Through these two years of studying and practicing Falun Dafa, Mr. Chen discovered that his character of being brash and concerned about his reputation changed. He said that in the past, “Whenever there was a conflict, I always blamed the other person. Now I know to look for my own problem first and find those unhealthy attachments I need to get rid of.” He said he now considers others first and he’s no longer short-tempered.