(Minghui.org) Sunday, May 8, 2022, was a bright and sunny day in Denver. Falun Dafa practitioners in Colorado gathered at Union Station plaza in downtown Denver to celebrate the 30th anniversary of Falun Dafa’s introduction to the world, by demonstrating the exercises and clarifying the truth to people. They also expressed infinite gratitude to Master Li Hongzhi and wished him a happy birthday. 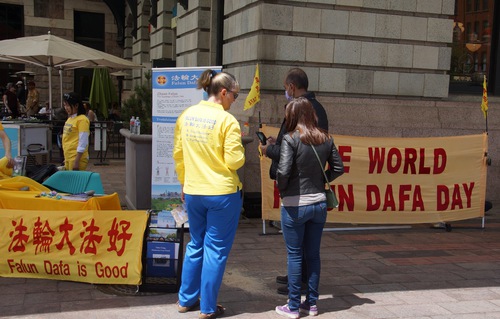 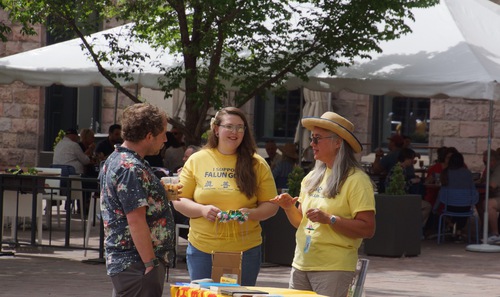 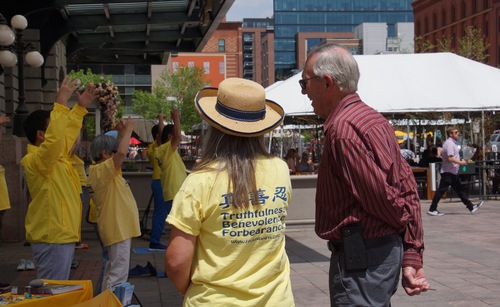 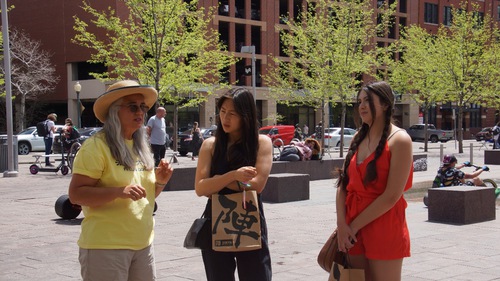 Two new Western practitioners shared their own experiences of starting the practice, and also took the opportunity to thank Master Li. Their lives have been completely changed by practicing Falun Dafa.

Elliot, a new practitioner who works as a software development engineer, recalled how he started practicing Falun Dafa. He said, “Throughout my life I had been fascinated with the deeper questions in life. As a young child I felt very different and isolated from others and did not understand people very well. I would pray at night for a bright and beautiful future free of suffering for all beings. I always felt that there was more to life than what appears on the surface.” 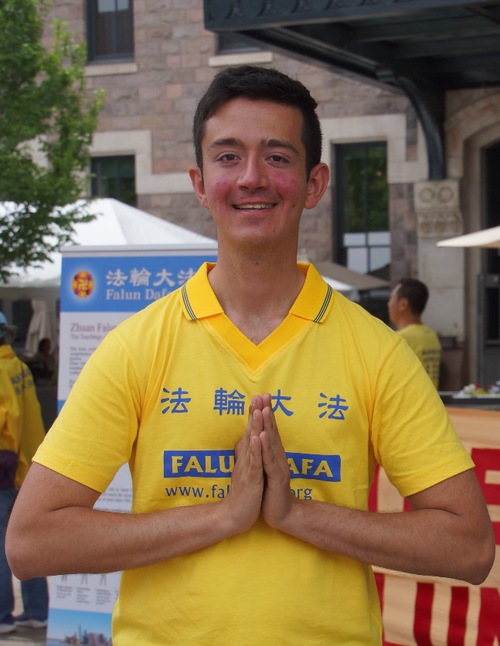 “Growing up I quickly became lost in ordinary society, becoming addicted and consumed by some very low level things including violent video games and pornography. I felt miserable, unmotivated, and lazy. I knew deep down that these things were harming me in many ways but I did not have the willpower to make a change. As I was raised Catholic, I began to look to spirituality for answers. During college I took up meditation and would meditate for long periods of time, completely losing myself in trance, which made me feel more peaceful but ultimately my same problems remained. This continued on throughout high school and college.

“After graduating college I began to spend a lot of my free time studying philosophy and theories of consciousness, along with prehistorical cultures and spiritual practices, and the connections between eastern and western civilizations and spiritual practices that is not well popularized. One day after watching a YouTube video about a small ancient religious group, when I scrolled to the comment section I stumbled upon a comment suggesting that if I’m interested in this video, I should read this book called Zhuan Falun and it linked to the website.

“I immediately opened the book and began to read the first section Lunyu (On Dafa) and words cannot describe my feelings upon reading these few paragraphs for the first time. It was as if a wave of energy was sent through my body. I felt that every word was explaining everything I had been reading, but at a much deeper, more fundamental level. I was in tears and I immediately realized that this was not an ordinary book, and continued reading for several lectures until my eyes were closed from fatigue. I finished the book in around a week and decided that my life from that point on would be one dedicated to cultivation. Since then my outlook on life has been completely changed on a fundamental level.

“I am so thankful to have found these teachings and the practice, which have allowed me to break free of the illusions that held onto me for many years and live a much more harmonious and energized life, dedicated to spiritual development.”

Stevie is a Native American with European heritage. From a young age, the Chinese thoughts of Lao Tzu and Eastern philosophy resonated with him. In 2007 as a human rights activist, Stevie learned of the persecution of Falun Dafa and became involved in activities to raise awareness of the CCP's (Chinese Communist Party) crimes and illegal organ harvesting. 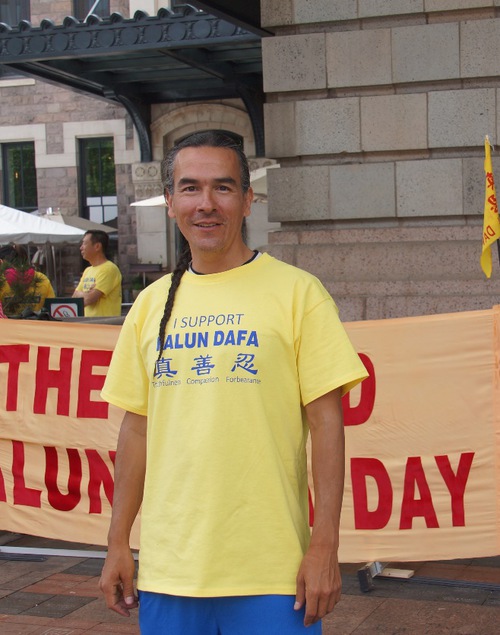 Stevie said, “I didn't discover Zhuan Falun until much later in 2019. I downloaded an online PDF file of the publication from the year 2000.

“I had tried my best to stop drinking for years, but always eventually picked up the habit again. After reading Lecture Seven in Zhuan Falun I suddenly found it very easy to avoid alcohol, even though I still had an unopened bottle of wine in the cupboard.

“Though I experienced some interference and inner conflict from my previous cultivation school, the principles set forth in Zhuan Falun began to play a guiding role in my life and practice. I finally decided to try and learn the exercises. The instructional video I found online began with Master performing the Great Hand Gestures of the Divine Language. My heart welled up with joy and indescribable peace. Warm tears began to flow freely upon witnessing such purity.

“I immediately enlightened to the principle of mutual generation and mutual inhibition. I saw that the horrific and insane CCP persecution arose in opposition to the perfect sanity of Truthfulness, Compassion and Forbearance of Falun Dafa.

“I began practicing the movements of the exercises on my own. I discovered there was a practice site nearby, so I grabbed the last bottle of wine from the cupboard and threw it in the garbage on the way there. I have never had a drink since. At the site during practice I saw a myriad of magical things spinning and descending from above like stars in the sky.”