(Minghui.org) Every time I read this passage in Zhuan Falun, it always touches my heart.

In the second half of 1993, I went to study in a city close to Guangzhou City, Guangdong Province. It was when qigong was very popular in society. Many fake qigong masters seized upon people’s desire for fame and fortune to promote their practices, claiming that practicing their gong could enable one to develop supernormal abilities in a short period and cure people’s diseases. I also learned several qigong practices for fitness and health improvement, but none of them worked.

Before the summer break in 1994, I learned that there was a practice called Falun Gong, and the founder would come to Guangzhou to give lectures during the summer break. We signed up for the lectures through the Guangdong Qigong Scientific Research Association. I remembered that the tuition fee for the seven-day class was only 40 yuan, far lower than other qigong classes.

Due to the increasing number of registrants, the address of the class was changed three times, from an auditorium that could hold about 1,000 people to a larger one that could hold more than 2,000.

At that time, my enlightenment quality was quite poor. After listening to Master’s teachings, although I knew that Falun Gong was different from ordinary qigong and was a supreme Buddha Fa, I was still halfhearted about the existence of God and Buddha because I had been deeply indoctrinated by the “atheism” theory instilled by the Chinese Communist Party since I was a child.

I did not properly understand the relationship between cultivation and everyday life, or the difference between “letting go of attachments” in cultivation and “losing the comfort of everyday life.” My misunderstanding was that to let go of attachment was to give up the good life in the world and become a quasi-monk. I thought that I was still young. My life had just begun, and I didn’t want to give up the good life of ordinary people, if that was what cultivation was all about. So I didn’t persist in practicing Falun Gong.

Because of my pursuit of fame, fortune, and romantic relationships, I fell for all the temptations in society. Soon, my stomach disease relapsed, which triggered complications in other organs. When the condition was serious, I could not even eat. My body was weak, and the medical treatment was not helpful. I was emaciated and in great pain.

At the end of 1994, good fortune struck once again. A practitioner told me that Master would hold the fifth lecture series in Guangzhou in December that year, and that would be the last face-to-face lecture that Master gave in China. I realized that this would be my last chance, and I clung to this opportunity like a lifeline and enrolled immediately.

Once again, the miracle showed itself before my eyes. I was weak and worn out at the beginning of the class, but I recovered after the class began. My appetite returned, my energy improved, and I truly felt the wonderful feeling of being illness-free.

In the class, I eagerly listened to Master’s lectures, attentive to every word, every sentence. I bathed in the great grace of Buddha. This time, it seemed to have opened up my dusty memories of millions of years. It was like after the thunder of spring, the ice and snow melted away, and the earth revived.

I finally understood what I had been given and the special era I was in. I cheered over and over in my heart that this was the great Fa that had never been preached on earth before! I could hardly contain my excitement.

“Many people have practiced qigong for a very long time. There are also people who have never practiced it, but who have pursued and pondered the truth and the meaning of human life. Once they learn our Falun Dafa, they will understand at once many questions in life that they have wished to understand but could not answer. Perhaps along with their minds being elevated, they will become very excited—this is for sure.” (Lecture Eight, Zhuan Falun)

This time, I made up my mind to truly embark on the journey of practicing Dafa. From being poisoned by “atheism” to understanding and embracing cultivation, it has been a very hard and tortuous process for me. But after really understanding the meaning of cultivation, its connotation, and the right way to do so, I often feel the true beauty of life and the wonderfulness of cultivation.

Memories of the Last Class in China

The fifth Guangzhou Fa-teaching lecture was also the last face-to-face lecture in China, held at the Guangzhou Gymnasium, with more than 5,000 students coming from all over China to attend it. Because there were too many people, many participants sat in the open space in the middle of the gymnasium.

Because of the limitation of space, many students could not enroll in the classes. When Master taught the first class in the gymnasium, many students who could not get into the class did not want to leave but quietly did the exercises in the open space outside the gymnasium. At that time, one could feel the touching atmosphere of sentient beings’ desire to obtain the Fa. When Master heard about it, he arranged for the staff to do a live broadcast outside the venue for the students who could not attend the class.

The podium where Master taught was placed in the middle of the gymnasium, with a simple golden tablecloth on the podium and a simple golden cloth hanging in the background (this background is the one we later saw in the “Guangzhou Fa lecture video”).

There was only a microphone and a glass of water on the podium, but Master rarely drank water in the two-hour lectures every day. He never used a script and only had a piece of paper with notes on the podium. The lectures were often interrupted by the enthusiastic applause of the students.

“Question: When someone helps others who are in need, is he transforming his karma into virtue or taking others’ virtue?

Teacher: When you see others having difficulties and help them, you are being kind and doing good. When you are helping others and doing a good thing, if it’s a difficult thing to do, you will endure hardships and your karma will be transformed. Usually, when you voluntarily help others, it is out of your own will and there is no transformation of virtue. But if it involves something valuable, then it is a different matter. Also, if someone frequently has tribulations, he may be paying for his karma, or there may be some sort of causal relationships involved. If a cultivator focuses on these things, he may do bad things, because he can’t see the causal relationships behind it. That’s why we advise practitioners to preserve their virtue and practice non-action. What we teach also includes this meaning: Ordinary people talk about accumulating virtue, but that’s ordinary people doing ordinary people’s things, as they are bound by the Fa at the level of ordinary people. You, on the other hand, are bound by the Fa at the cultivation level, so it’s not right for you to be attached to those things.” (“Teaching the Fa and Answering Questions in Guangzhou,” Zhuan Falun Fajie)

After Master answered the questions for everyone, many students presented flowers and banners to Master. Next, Master sat on the podium, performed the big lotus mudra for everyone, and finally gave everyone a meaningful concluding remark.

“In our country, I would say that when it comes to truly guiding people toward higher levels and teaching Fa at higher levels, I am the only person doing it. Or be it the whole world, I am the only person doing it. No matter what, though, the purpose is to enable you—in a historic period like this and in an environment like this where human minds are so complicated—to obtain a righteous Fa, be able to truly improve yourself, and truly cultivate yourself. Even if you don’t take up cultivation, after you finish this class you will try to be a good person. I believe that’s the case.” (“Teaching the Fa and Answering Questions in Guangzhou,” Zhuan Falun Fajie)

“During the course of your future cultivation, when you find it hard to endure, when you feel that you can no longer bear it, think of these words of mine. What are they? They are: “It’s hard to do, but you can do it; it’s hard to endure, but you can endure it.” I hope that all of you will be able to achieve Consummation and great success in your Dafa cultivation!” (“Teaching the Fa and Answering Questions in Guangzhou,” Zhuan Falun Fajie)

At the end of the class, Master smiled and waved goodbye to everyone and slowly left the gymnasium. All the students stood and watched Master, reluctant to leave for a long time.

I took these precious photos with my camera to record this indelible memory. In the later cultivation process, whether in my personal cultivation, when I went to Beijing to appeal for Dafa, or when I was imprisoned for upholding my faith, the legendary experience of listening to Master’s Fa lectures twice has always inspired me to be brave and diligent and to live up to Master’s grace! 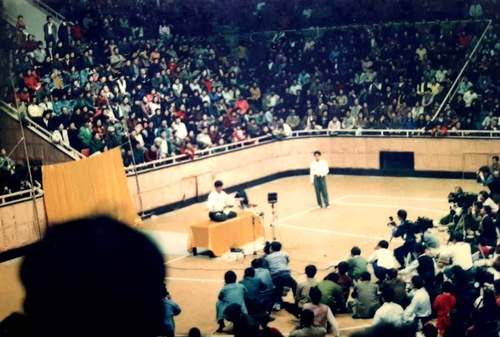 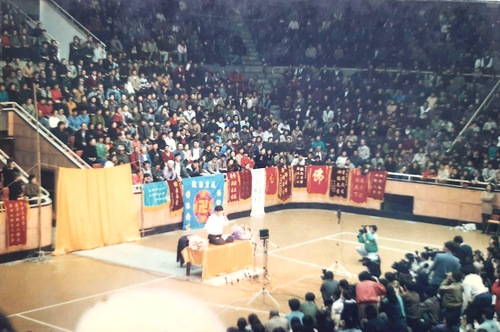 At the request of the students, Master made the big lotus mudra for everyone. 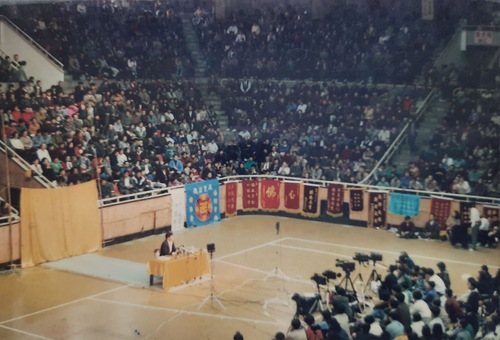 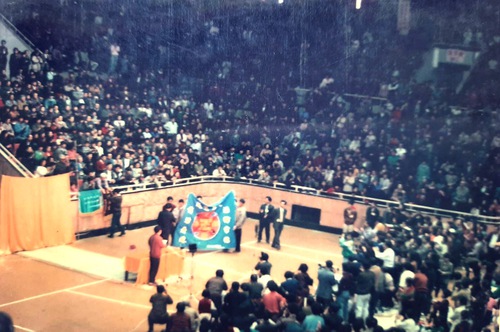 At the end of the lecture, the students presented a banner to Master 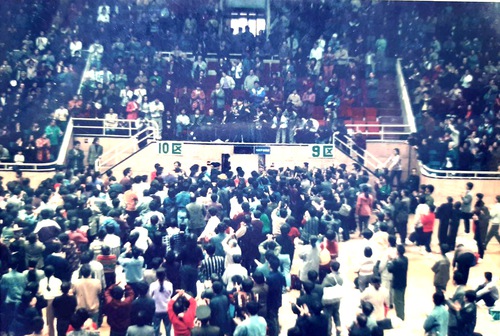 At the end of the class, the students were reluctant to see Master leaving the gym

Facing the global pandemic that broke out two years ago, many people are thinking calmly and reflecting on what life is all about. As an ancient saying goes, “The human body is hard to obtain, the Middle Kingdom is hard to be born, the Dharma is hard to come across.”

After 20 years of cultivation, from the bottom of my heart, I would like to tell you that Falun Dafa is a once-in-a-lifetime practice. I wish those who are fortunate enough to get it can read it attentively and cherish it.