(Minghui.org) On May 7, 2022, Falun Dafa practitioners held a parade and a rally in London, celebrating the 30th Anniversary of the introduction of this ancient cultivation method and the birthday of its founder Master Li Hongzhi. 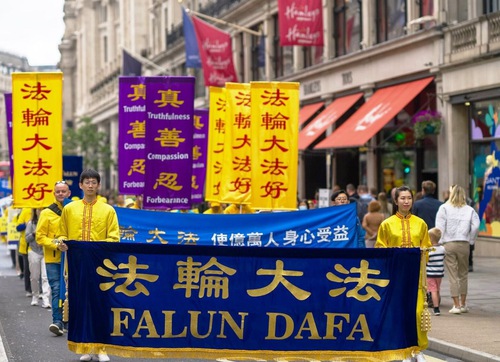 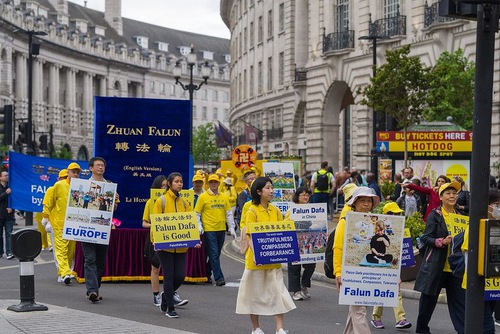 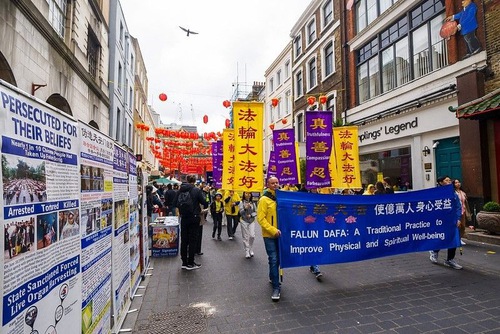 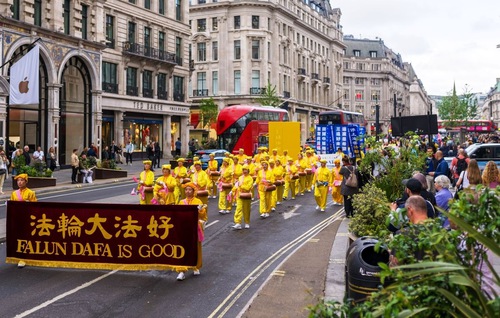 Practitioners held a parade in London on May 7.

The parade wove down London’s busiest streets, including into Chinatown. Practitioners played the waist drums, did dragon dances, and demonstrated the exercises.

The parade ended at 10 Downing Street, the residence of the British Prime Minister, where a rally was held, during which 12 proclamations issued by government officials were read and practitioners and supporters gave speeches. 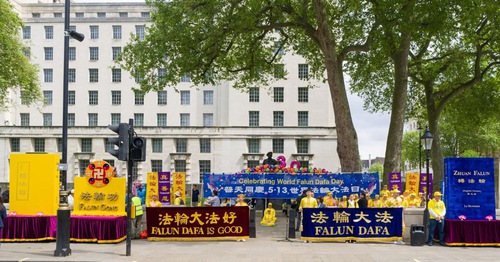 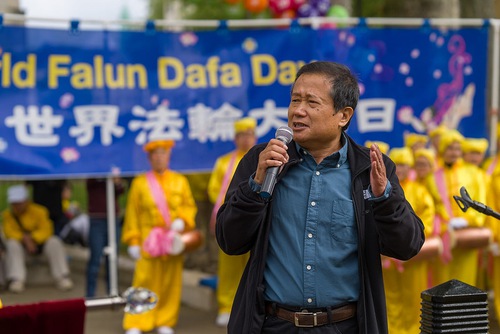 Zhang Pu, a well known Chinese author, spoke at the rally. He said that when Falun Gong was first made public 30 years ago, no one thought that it would become a strong righteous power in the world. He praised Falun Gong’s teachings and said they had become an important component of civilization.

He pointed out that, 23 years ago the Chinese Communist Party (CCP) claimed it would eliminate Falun Gong in three months and launched the brutal persecution, but, instead, Falun Gong has become stronger, and more and more people in the world recognize it today.

Zhang Pu said that one of his friends in China used to be a CCP member, but he quit and started to practice Falun Gong.

“He was arrested and sentenced. After being released, he tried his best to tell people what Falun Gong really is and passes out Falun Gong materials in public. I am really touched. I am proud of all of you.

“Falun Gong is powerful. What is the source? As an author, I found that the origin is their belief and teaching. It is Truthfulness-Compassion-Forbearance. Some people don’t know that these are core principles of traditional Chinese culture. It is the truth in the world, and Falun Gong glorifies it.

“Because of Truthfulness-Compassion-Forbearance, Falun Gong will get even stronger.

“The murderers in the CCP never imagined that Falun Gong would become so strong. They are afraid, and trembling. The CCP is short-lived, but Falun Gong will live forever.”

Young Practitioner: “I am the happiest person in the world.” 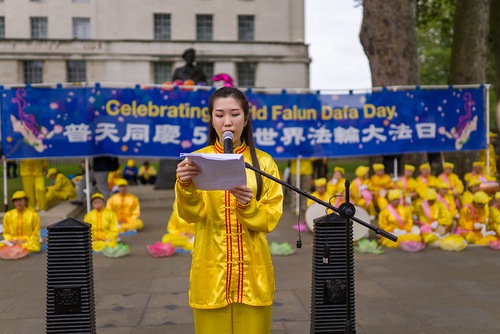 Jessica, 25, earned her Masters degree in London. She said in her speech that her grandparents' health issues were resolved by practicing Falun Gong, so the rest of her family began to practice it. “One’s life while cultivating Falun Gong is full of sunshine and happiness. It is meaningful.

“Falun Gong teaches me to be a better person. It guides my life. I am lucky to have grown up with its protection.

“I want to say thank you to Master Li for making me the happiest person in the world.”

Western Practitioner: “I want to shout to the world: I found Dafa.” 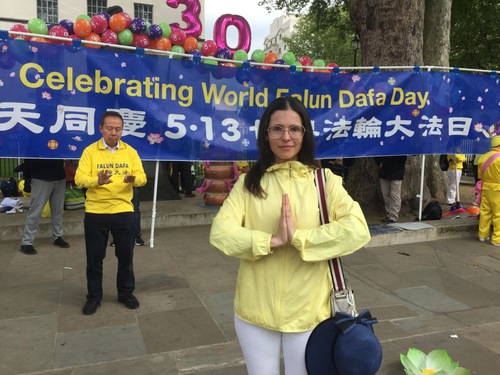 Natalia Nutting said, “Master, thank you. Thank you for your compassionate efforts to save us, to save the world from danger, to never give up on us, to remind us of Truthfulness-Compassion-Forbearance, the simplest and most fundamental cosmic characteristics.”

Natalia Nutting is a teacher. She shared her experience of cultivating Falun Gong.

“At the end of 2003, when I was 21 years old, I noticed that my brother had changed completely. He used to smoke, drink, take drugs, and never talk to me, but I suddenly noticed he was calmer,” she said.

“He no longer smoked or drank and began talking to me. One day, I asked him, ‘What happened to you?’ He said, ‘I started practicing Falun Dafa, and this brought me peace.’ I’d never heard my brother say the word ‘peace’ before. In early 2004, I opened the book Zhuan Falun at eight o’clock in the morning. I read it non-stop and finished it at eight o’clock the next morning.”

After reading the book, although she didn’t understand it 100%, she said she was sure, “That’s what I’ve been looking for.

“Through studying the Fa and practicing, everything has changed for me—my body, mind, and inner self-confidence.

“I used to be very shy because I had dyslexia, so I couldn't speak or express myself normally. After practicing Falun Dafa, I was able to express myself better, and my self-confidence came from Dafa. I have no problem communicating with anyone now. ”

People Are Happy to See Activities to Expose the Persecution

Many passersby stopped to watch the parade and the rally. They also signed the petition to support practitioners’ efforts to end the persecution. 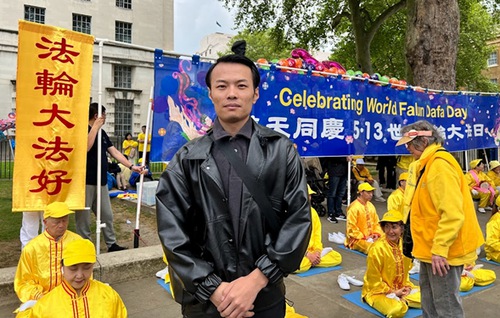 Enhe said that he supports Falun Gong: “The Chinese people should have freedom of belief.”

Enhe, a Mongolian Chinese, left China recently. He signed the petition. When he participated in activities in China to protest the CCP eliminating the Mongolian culture, he was arrested three times.

He said, “In a democratic country, people have the freedom of belief, but not in China. I support Falun Gong. We should have this freedom.” 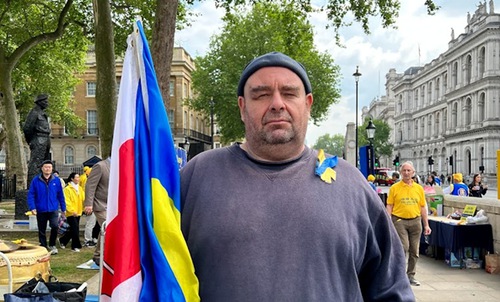 Local resident Tom said he’s seen practitioners’ peaceful protests in front of the Chinese embassy and knows that the persecution of Falun Gong started over 20 years ago.

“I am glad to see the rally today. I am glad to know that Falun Gong continues their efforts to expose the persecution.”