(Minghui.org) As the 30th Anniversary of Falun Dafa’s introduction to the world approached, nearly one thousand practitioners from northern Taiwan gathered at Liberty Square in Taipei on May 7, 2022 to celebrate World Falun Dafa Day and Master Li Hongzhi’s birthday. Practitioners also talked about their experiences after they began practicing Falun Dafa. 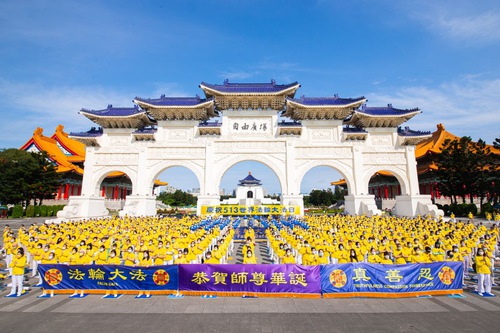 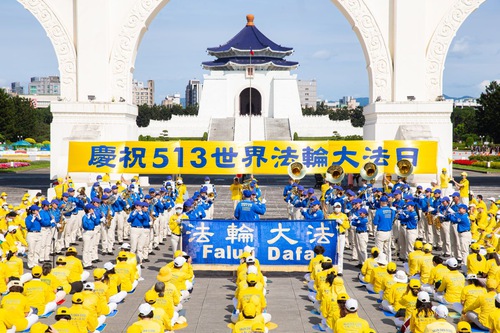 The Tian Guo Marching Band performed during the event. 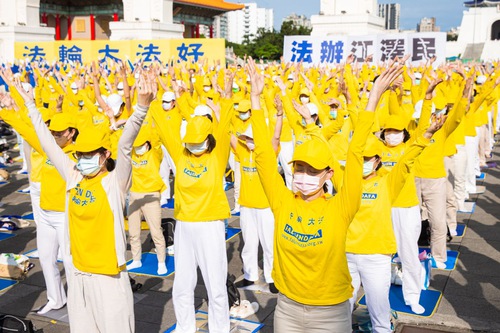 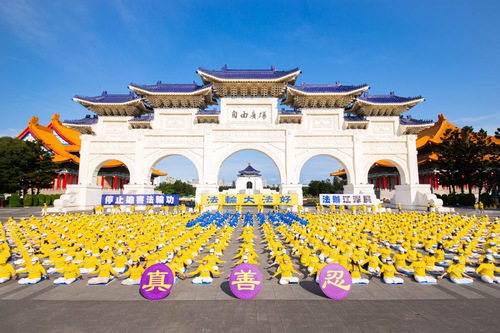 Ziting heard about Falun Dafa last February from the Internet. She was curious and bought a copy of Zhuan Falun, the main book of Falun Dafa, also known as Falun Gong. She could not put it down.

She said, “I practiced Buddhism and Taoism. But I didn’t find the answers to my questions about life and the universe until I read Zhuan Falun. It was just like what Master Li said, finally I found the way back home.”

After reading the book, she attended a local free Nine Day Falun Dafa Workshop and learned the exercises. To her surprise, she immediately felt some physical changes. “My body became lighter. My allergies were gone, and my sleep improved.”

“I also found that I’ve become more tolerant. I was often easily moved by conflicts with my clients and co-workers. I even often fought with my mom. But now, when conflicts arise, I don’t feel anything. I can easily handle them with forbearance.”

She thanked Master Li for giving her a chance to cultivate and guiding the way home.

Buddhist nun: “I have been waiting for thousands of years.” 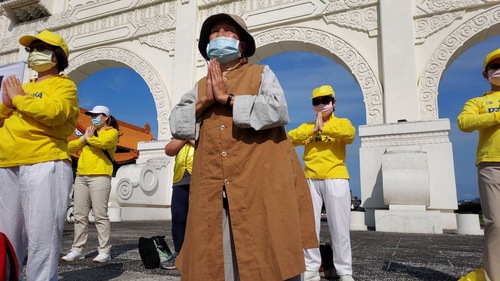 Huixun does the Falun Dafa exercises.

Seventy-year-old Huixun is a Buddhist nun. She said, “Falun Dafa is the righteous way, and answered many of my questions.”

“I became a nun when I was 29. I looked for a real path that can take me home. When I found Falun Dafa in 2000, I realized that what I have been waiting for, for thousands of years, is here.”

Huixun said she has been very healthy since she started practicing Falun Dafa, “I used to be competitive, and often had conflicts with people. Now, I am much more peaceful. I know how important it is to improve my xinxing and follow the principles of Truthfulness-Compassion-Forbearance. The profound Dafa teaches me to put down my attachments, and that is how one can improve oneself.”

Following the Principles of Truthfulness-Compassion-Forbearance

Lin Jianhong works in the healthcare industry. He said he was a troubled child. “I used to smoke, fight with other kids, and even used drugs. I refused to listen to my parents.” 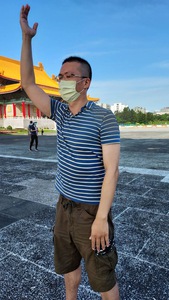 “When my parents began practicing Falun Dafa, their conversations interested me. So, I watched the videos of Master Li’s lectures. Gradually, I found I quit many bad habits, and stopped hanging out with bad people. I started to follow the principles of Truthfulness-Compassion-Forbearance to be a good person.”

His body improved too. “My joints were injured from doing intensive exercises and I needed physical therapy. One month after I started practicing Falun Dafa, the injuries were gone. I really appreciate Master Li’s teaching. The only thing I can do to pay him back is to improve myself further.”

Shufen is an elementary school teacher. In 2015, she was diagnosed with breast cancer. After trying all kinds of therapies that didn’t work, she started to practice Falun Dafa and her cancer disappeared. 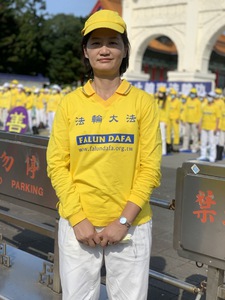 Shufen at the event on May 7.

She said she was not a good mom or wife. She was impatient with her kids and never did housework. Falun Dafa’s principles guided her to be a better wife and mother. Her husband was surprised to see her cooking for the family. Her daughters also witnessed her changes, and began practicing themselves.

Shufen also changed her way of disciplining students. She tells them to look within for their own faults during conflicts. She emphasizes their good sides, and asks them to learn from positive role models. Her class is more harmonious and disciplined.

Getting Out of Depression

Yijie works in a barbershop. After a miserable marriage, she divorced, and began drinking. In 2011, one of her friends suggested she try Falun Dafa. She did the exercises diligently, but didn’t quite understand the teachings. 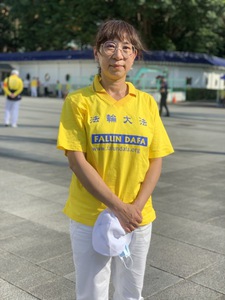 She then joined a local exercise site and read Zhuan Falun with other practitioners. The more she read, the more she understood what Truthfulness-Compassion-Forbearance meant. She quit smoking and drinking and got out of depression.

With fellow practitioners’ help she got a loan to open her own barbershop and started a new life.

“I don’t worry about anything now. I just work hard and do what a cultivator should do. I now understand what Master said,

“In cultivation and practice one should be in a state free of intention. As long as you focus on cultivating your xinxing, you will make breakthroughs in your level and certainly get things you deserve.” (Zhuan Falun)

Yuxin practiced Falun Dafa with her mom when she was a 5th grader in 2002. Because she was young, she didn’t understand what cultivation is. As she grew older, she became rebellious. She attended college in another city and stopped practicing. 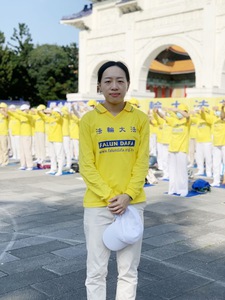 Yuxin at the event on May 7

In 2020, she injured her back, and physical therapy didn’t work. One day, she took her mother’s suggestion and joined a local Falun Dafa exercise site.

“I had severe pain when I first did the exercises. I thought: I want to cultivate. I insisted on doing the exercise for 15 minutes. After that the pain was gone, and my back felt fine.”

After coming back to cultivation, her behavior changed. “I am glad that I can rectify myself with the principles of Truthfulness-Compassion-Forbearance. Now, my relationship with my mom is very harmonious. I thank Master Li for not giving up on me.”

“Police Refuse to Disclose the Cause of Woman’s Suspicious Death”

“An Ascites Patient’s Encounter with a Falun Dafa Practitioner”