(Minghui.org) Mynttorget or “Coin Square,” near Parliament in Stockholm’s city center is always bustling with people. Every Friday and Saturday afternoon, Falun Gong practitioners set up an information booth at Mynttorget so that people can learn about this ancient spiritual practice from China.

Passersby are drawn to the practitioners’ gentle, relaxing exercise movements and the display boards with information about Falun Gong (also called Falun Dafa) and the persecution in China. After learning more about the Chinese Communist Party’s (CCP) brutal persecution of Falun Gong practitioners, people are happy to sign a petition calling for an end to the human rights atrocities in China. 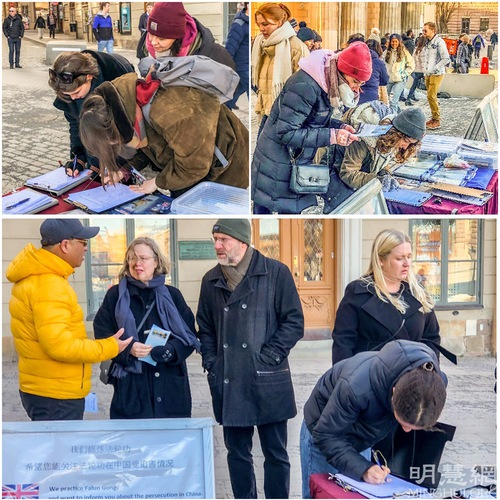 People at Mynttorget in Stockholm sign a petition to show their support for Falun Gong after learning about the persecution. 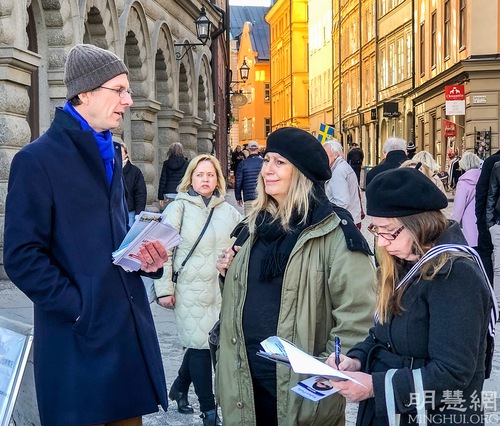 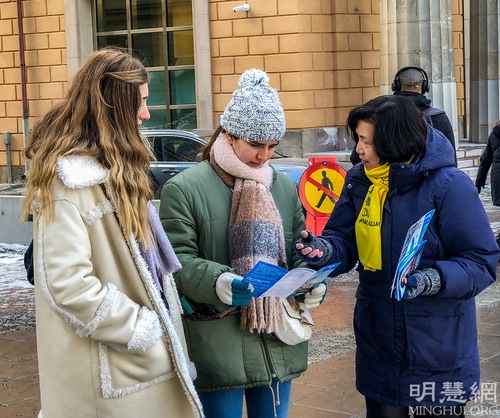 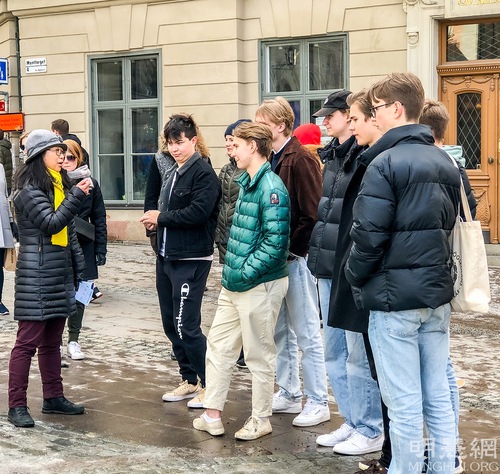 A middle-aged woman from Latvia walked up to the practitioners’ table on March 5, and without saying a word signed the petition to stop the persecution. When a practitioner asked her if she knew about Falun Gong, the woman replied, “I know this is a wonderful practice. I also know the CCP is removing organs from detained Falun Gong practitioners without their consent and selling them for huge profits. I want to help stop this persecution. I have to sign the petition.”

She smiled and told practitioners that she is interested in qigong practices. “Two years ago, I learned the Falun Gong exercises after reading an introduction about it. My body is very sensitive, and I felt a powerful energy then. I did the exercises daily. A week later, the energy became so strong that I was terrified of doing the exercises! Do you feel this way too?”

Practitioners shared their experiences with her and told her about the books containing the teachings of Falun Gong. A practitioner said, “The book Zhuan Falun will guide you to be a good person based on the principles of Truthfulness-Compassion-Forbearance. This practice cultivates both the mind and body. It is important to read the teachings.”

The woman said, “I know about this book, but to be honest, I have never read it in order. Now that I know how important it is to read it, I will make sure I read it regularly and continue doing the exercises.”

She could not stop smiling. The practitioners could see that she was delighted to reconnect with Falun Gong again.

One Saturday afternoon in March, Marcus, a Swedish national, stood reading the display boards with his brows furrowed in thought. He then approached a practitioner and said he wanted to know more about Falun Gong and why innocent practitioners are tortured in China for their belief.

Marcus said that he is a China expert and speaks fluent Mandarin. He lived in China for more than two years and has traveled extensively in the country. He said he has many friends in China.

“In Sweden, I have a Chinese friend whose mother practices Falun Gong. This friend is often worried about his elderly mother who lives in China, because she practices it secretly at home. So I really wonder why is the CCP suppressing Falun Gong?”

Practitioners explained the practice of Falun Gong to him in detail and talked about the lies fabricated by the Communist regime to demonize the practice and deceive people. Marcus was disgusted and signed the petition to help stop the persecution. He said, “I live near the practice site in the city center. I am interested in learning this. This Sunday, I might go down to learn the exercises.”

Couple Agrees with the Principles of Truthfulness-Compassion-Forbearance

On April 2, a couple from Finland were shocked after reading information about the CCP’s crimes of organ harvesting. “This is cruel!” the wife said. They signed the petition, took photos of the information boards and then approached a practitioner. The practitioner explained about Falun Gong to them and told them that the main book of Falun Gong, Zhuan Falun, has been translated into more than 40 languages. The practitioner also told them that the book can be downloaded free from the FalunDafa.org website. 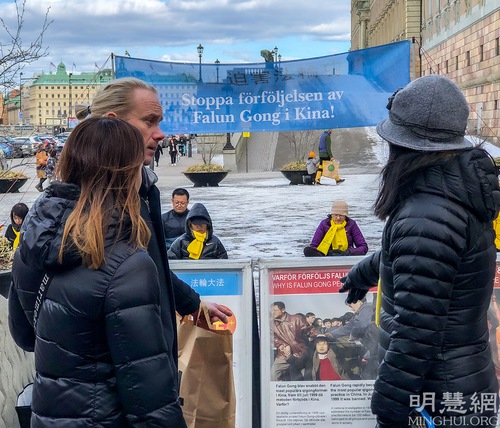 A couple from Finland (left) were horrified and angry to learn about organ harvesting in China. They condemned the CCP for its crimes against humanity.

They spoke about how people’s moral values are declining and how many people only go after money. In contrast, Falun Gong teaches people to be good and is taught for free, so you cannot buy it with money. The couple said that Falun Gong is extraordinary.

Before departing, they took information about the practice and put their palms together in front of their chests, in the traditional heshi gesture to show their respect to practitioners.

Musician Wants to Help Stop the Persecution Through His Music

Fred, a musician, paused at the Falun Gong information booth for a long time. He then came over to the table to sign the petition. He told practitioners, “I have a team that creates music. A few years ago, we began to create songs about human rights and freedom. Today, I stood here watching your peaceful exercise demonstrations and reading the information about it, and it has given me inspiration.”

He said he wanted more information about Falun Gong and hoped to pass it along to his group members so that they could also learn about the practice.

Fred was delighted to receive some brochures about Falun Gong, a DVD and a lotus flower. He said he wanted to pay for the things he’d received. When practitioners told him that everything was free, he was noticeably moved.

He said, “Thank you, I don’t have anything to give you but I will assimilate everything I learned into the music I create. I will work hard to pass on the truth through various channels and help stop the persecution.”

“The Importance of Guarding One's Speech”

“If Not for Dafa I Would Have Divorced”