(Minghui.org) Melbourne, Australia, located in the Southern Hemisphere, recently held numerous events to celebrate the golden season of autumn. Practitioners in North Melbourne and West Melbourne participated in two of them, where their exercise demonstrations and Falun Dafa informational sessions were well received. From hosts and elected officials, to community leaders and ordinary citizens, they applauded the practice and said they hoped to see practitioners participate in future events. 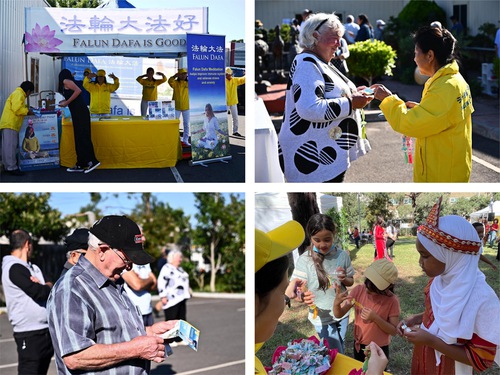 Practitioners introduced Falun Dafa to the public during two events in March in Melbourne, Australia. 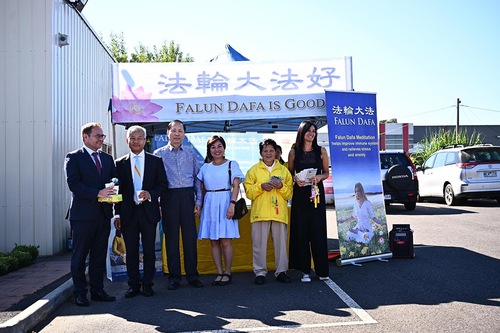 During the Bonsai & Orchid Exhibition on March 19, Member of Parliament Daniel Mulino (first from left) and Bon Nguyen (second from left), president of the Vietnamese Community of Australia, thanked Falun Dafa practitioners for their courage in opposing the persecution in China and their contribution to society. 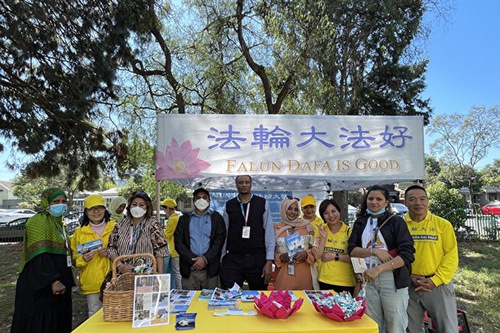 During the Harmony Day celebration on March 26, staff members from the Department of Families, Fairness and Housing in Victoria were interested in learning more about Falun Dafa. Through local health agencies, they plan to arrange recurring meetings recommending the practice to community members. 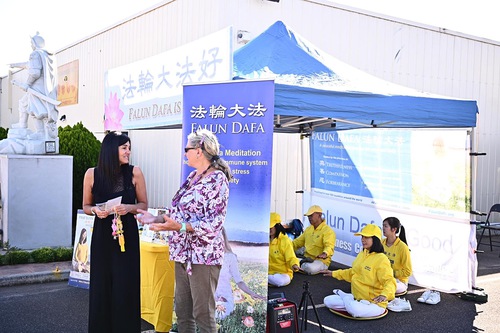 Next to the exercise demonstration at the Bonsai & Orchid Exhibition, a practitioner talks about Falun Dafa with a local resident (first from left).

The Vietnamese Cultural & Heritage Centre again held the Bonsai & Orchid Exhibition on March 19-20. This year’s theme was improving mental health. “Falun Dafa is very effective uplifting mind and body. This is especially important to people during the pandemic,” explained Mai Pham. She said this was the second time practitioners were invited to such an event since the Bonsai club was established last year. 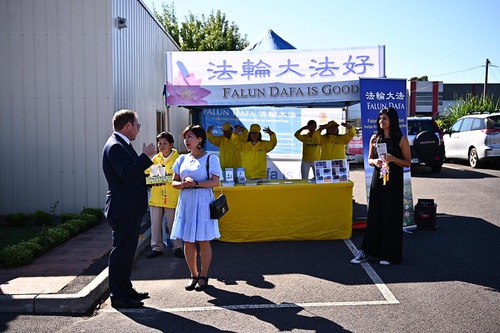 Daniel Mulino, Member of the Australian House of Representatives, said he was happy to see Falun Dafa practitioners at the event.

Daniel Mulino, Member of the Australian House of Representatives, said he was disturbed by the suppression in China, and plans to discuss this issue with other elected officials. 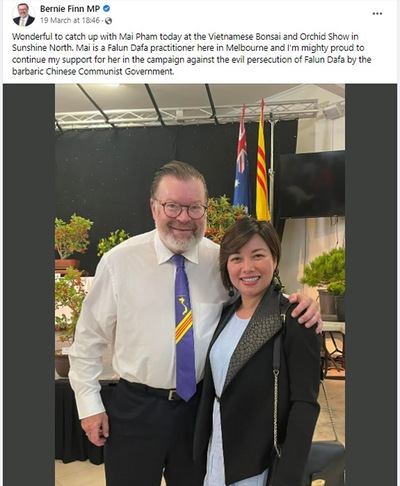 Bernie Finn, Opposition Whip in Legislative Council in Victoria Parliament, shared his picture with Mai Pham in his Twitter account.

“Wonderful to catch up with Mai Pham today at the Vietnamese Bonsai and Orchid Show in Sunshine North,” Finn wrote in a tweet on the same day, “Mai is a Falun Dafa practitioner here in Melbourne and I am mighty proud to continue my support for her in the campaign against the evil persecution of Falun Dafa by the barbaric Chinese Communist Government.” In opening remarks of the event, he also thanked Falun Dafa practitioners for their efforts. 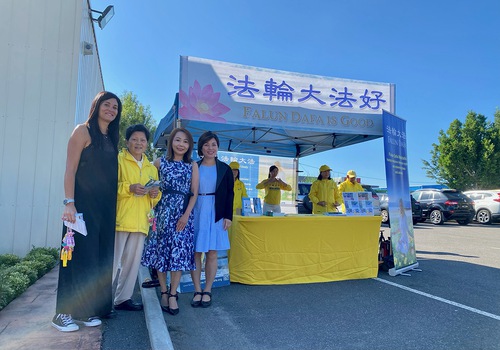 Thuy Dang, city councilor and deputy mayor of Brimbank, said she’s known Falun Dafa practitioners for many years. Impressed by their courage and sacrifice, she praised practitioners for their great contribution to society. 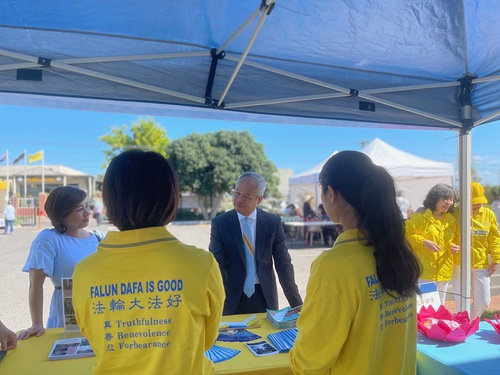 Many people who attended the event were interested in learning more about Falun Dafa, added Pham. “They were especially amazed by the sitting meditation, and look forward to more informational sessions.”

Both health agencies and the Vietnamese Community of Australia said they would invite practitioners to future activities so that the public can benefit from the practice.

Falun Dafa practitioners were invited to the Harmony Day celebration in North Melbourne on March 26. The activity was hosted by the Victoria Department of Families, Fairness and Housing, North Melbourne Language and Learning Centre, and the Vietnamese Community of Australia. 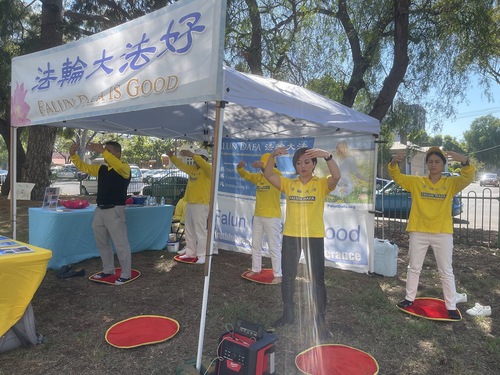 Exercise demonstration by Falun Dafa practitioners during the Harmony Day celebration in North Melbourne on March 26, 2022.

Pham, the practitioner who coordinated this activity, said the Victoria Department of Families, Fairness and Housing were very interested in Falun Dafa. “Their staff members took a group photo with us. They also asked us to forward more information to the local Cohealth offices, so that recurring meetings can be planned for us to introduce the practice to the community.” Cohealth is a large not-for-profit community health organization that provides health and support services to the state of Victoria. 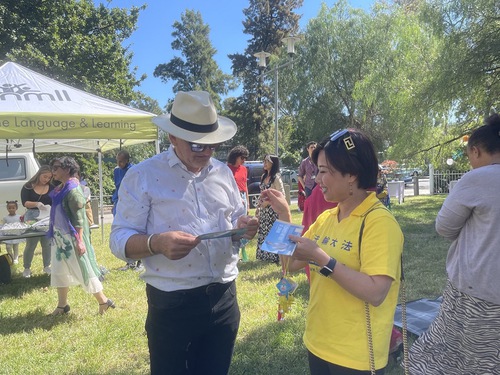 Cliff Rundle is the general manager of North Melbourne Language & Learning. He was happy to hear about how Falun Dafa has benefited about 100 million people around the world. He was also surprised that practitioners have been mistreated in China since 1999 for their belief in Truthfulness-Compassion-Forbearance. 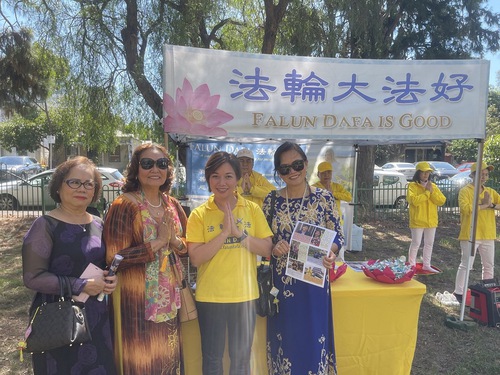 Truong from Vietnamese Elderly Group at Kensington (second from left) is eager to learn more about Falun Dafa.

Truong is a team leader in Vietnamese Elderly Group at Kensington, a suburb of Melbourne. She said she hopes practitioners will come to her organization and introduce the practice to its members.

“After hearing the positive changes Falun Dafa has brought to us, Truong is anxious, to know more,” Pham added, “We are so happy that people from different ethnic groups and cultural backgrounds are interested in learning the practice.”

“[Selected Opinion Articles] “How Did Your Psoriasis Go Away Without Treatment?””