Home > News & Events > April 25 Events
New Zealand: Participants in the April 25 Appeal Recall that Day During Commemorative Event Held in Front of the Chinese Consulate
April 30, 2022 | By a Minghui correspondent in New Zealand

(Minghui.org) Falun Dafa practitioners demonstrated the exercises in front of the Chinese Consulate in Auckland, New Zealand, on Monday morning April 25, 2022 to commemorate the 23rd anniversary of the April 25 Peaceful Appeal in China. Many people driving by sounded their car horns to encourage them. Passersby expressed their support for the practitioner’s peaceful effort calling for an end to the persecution. 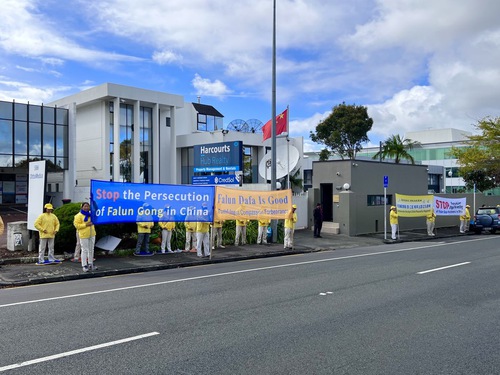 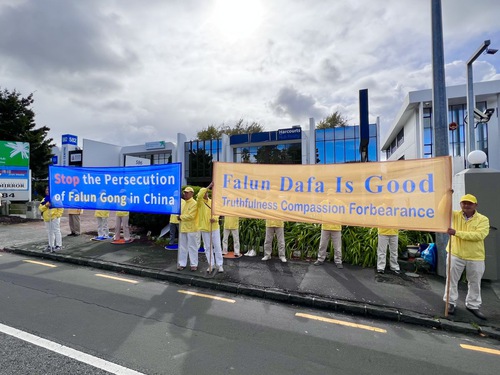 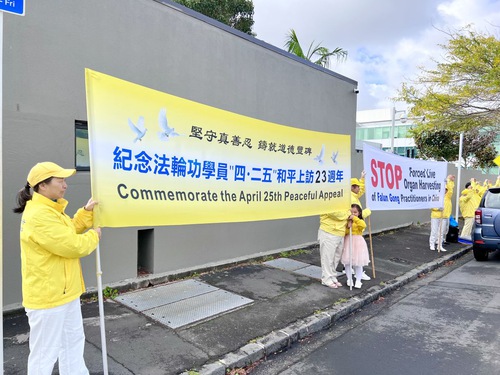 Practitioners did the exercises in front of the Chinese Consulate in Auckland on April 25, 2022.

Thousands of practitioners have been killed during the persecution. Of the 10,000 practitioners who participated in the appeal 23 years ago, some managed to leave China. Every April 25th, they recall that fateful day.

Former Qinghua University Professor: The Peaceful Nature of the April 25 Appeal Has Been Recognized Worldwide

Ms. Wang Jiuchun was a professor at Qinghua University when she participated in the appeal 23 years ago, she said, “At 4 a.m. that day, it was a bit chilly. I walked out of the Qinghua University Entrance and took a taxi with three other practitioners to the State Council Appeals Office. When the taxi reached East and West Chang’an Street, both sides of the road were filled with Falun Dafa practitioners. They were doing the exercises and they lined up in an orderly manner. No one even spoke so it was quiet. Some practitioners brought bags and began collecting rubbish while others cleaned the toilets. The practitioners took the initiative to coordinate, so the area was clean and in order. When the appeal ended, even the cigarette butts discarded by the police were picked up. When we left there was not even a piece of paper on the ground. The appeal of over 10 thousand people was so grand and peaceful. When we boarded the bus to leave, the driver smiled and gave us a thumbs up, saying, ‘You are great. There is hope for China now!’”

“Falun Dafa practitioners’ peaceful appeal amazed people both in China and overseas. The rational and peaceful nature of the appeal was noticed by people all over the world.” Wang Jiuchun sighed and said, “However, such a peaceful appeal was maligned by the Chinese Communist Party (CCP) and claimed to be a ‘siege’ of Zhongnanhai, the CCP’s compound. We followed the police officers’ instructions and stood where they told us, but kindhearted Falun Dafa practitioners did not expect that these locations were part of the plot that they had been planning. They set up a trap to make it look like practitioners were surrounding Zhongnanhai.

Jiang Zemin, the general secretary of the CCP at that time, framed Falun Dafa. He activated all segments of China’s bureaucracy and a quarter of the country’s financial resources to start a persecution of Falun Dafa practitioners. It turned out to be the cruelest persecution campaign since ancient times. He even ordered that practitioners’ organs be harvested while they were still alive, to sell to transplant patients. This genocidal persecution has brought disaster to the people of China and it directly caused the degeneration of the country’s system of virtues and its judicial system, too.” 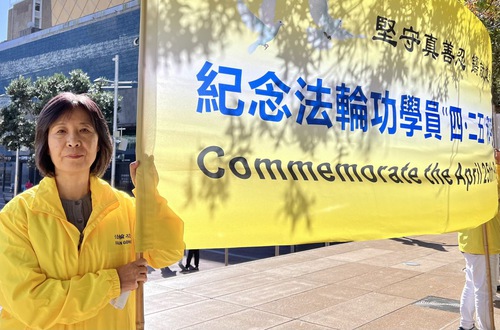 Ms. Shen Juan was working in Beijing. By 1999, she had practiced Falun Dafa for 5 years and benefited both physically and mentally. She wanted to tell the Appeals Office the true story. After a discussion with her small Fa study group, they decided to go to Zhongnanhai the next day to submit their petition. She said, “The six of us arrived at Fuyou Street, the west entrance of Zhongnanhai, where the State Council Appeals Office was located before 7 a.m. Later, as more and more people came to submit their petitions, the people who were sitting stood up and the entire walkway was lined with standing practitioners who were waiting to submit their petition. Some were reading Zhuan Falun, while others just stood quietly. There were many people, but it was quiet and orderly.

What happened in the afternoon is still fresh in Ms. Shen’s mind. She said, “In order to maintain the neatness of the queues, the younger practitioners stood in the front row, and the practitioners from outside Beijing and the older practitioners took turns sitting in the back. That day, the camera car kept driving back and forth, recording videos. Around 3 p.m., some red flyers were passed around. The message on them told practitioners who were gathered at Zhongnanhai to leave quickly, otherwise, they would bear the consequences. At that time, no one wavered. Everyone remained standing or sitting quietly. After a while, a group of police, armed and dressed in riot gear, came and jumped down from a riot control vehicle. They formed a row, about one officer every 2m, and stood facing the practitioners. The atmosphere immediately tensed up. After a while, these policemen seemed to have received some instructions and they suddenly left. After that, everything became peaceful again. I felt that the practitioners’ composure and peacefulness were fused with the universe’s energy.”

“That evening, in order to maintain the order and prevent the bad people from making trouble, the young practitioners held hands to form a human wall. Just then, a Beijing practitioner’s daughter found her parents and started to cry. She said, ‘Please leave quickly. I heard that they are going to clear the scene tonight.’ Clearing the scene, the practitioners from Beijing who lived through the 1989 students’ movement all knew what that meant. However, that practitioner comforted her daughter and said, ‘Nothing will happen. You go home first. Once there is a resolution to the problem, we will go home immediately.’”

Ms. Shen continued, “That night, around 9 p.m., there was good news from the front: news spread that the problem had been resolved and that everyone should leave immediately. After that, everyone packed their things and left. Twenty-three years have passed but what happened that day is still clear in my mind. The Falun Dafa practitioners were rational and peaceful throughout the whole process, as they behaved based on the cultivation principles of Truthfulness, Compassion and Forbearance. There was not a single piece of rubbish left behind. Practitioners even picked up the police officers’ cigarette butts which littered the ground. This fully demonstrated that Falun Dafa practitioners think of others in whatever they do and that they have great compassion and forbearance. However, this group of kind people’s peaceful behavior was framed by the CCP and claimed to be the ‘siege’ of Zhongnanhai.”

Ms. Cao Rongfen said about her experience, “My practice site heard the news on April 24th when we were doing our morning exercises. Everyone went to submit their appeal the next day and request the release of the Falun Dafa practitioners who were arrested by the Tianjin police, allow Falun Dafa books to be published, and allow practitioners an unrestricted practice environment. When we reached the Appeals Office, many people were already there. The alleys along Fuyou Street were full of standing Falun Dafa practitioners. Everyone just waited quietly. The scene was very quiet, peaceful, and calm. There were no commotions or slogans shouted.”

She said, “I walked towards Chang’an Street. Along the way, the practitioners were either meditating, doing the exercises, or reading the Fa. The scene continued till the end of Chang’an Street but there was no traffic congestion. When I walked back towards Zhongnanhai’s west entrance, I saw the then premier, Zhu Rongji, meeting the practitioner representatives together with the leader of the petition office. We just waited for the outcome. During this process, the residents of Fuyou Street saw our peaceful and kind behavior. They were deeply touched and praised us.”

“Around 9 p.m., news came that the issue had been resolved and the practitioners who were arrested in Tianjin were already released. As soon as we heard the news, we went home. Before practitioners left they even picked up the police officers’ cigarette butts. The ground was cleaner than when we came.

However, our peaceful appeal became the reason that Jiang Zemin used to persecute Falun Dafa: saying that Falun Dafa’s group discipline is even better than the army. He did not know that people who truly cultivate their hearts and try to be kind people will naturally do everything well.”

The April 25 Peaceful Appeal Is a Great Event 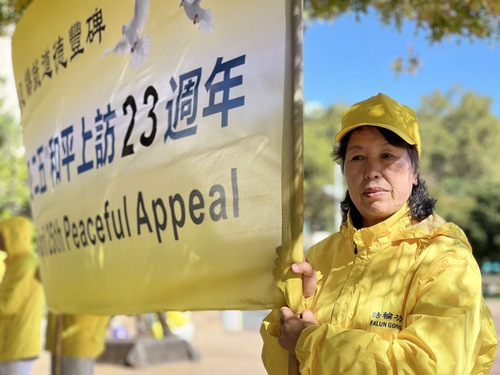 Pei Yujie said she’ll never forget the day she participated in the peaceful appeal on April 25, 1999.

Ms. Pei Yujie was one of the practitioners who went to submit her petition during the April 25 Peaceful Appeal 23 years ago. She said, “After reaching Beijing, we practitioners from outside Beijing, went to Fuyou Street under the guidance of police officers. The street was lined with practitioners. The scene was grand and solemn. There was no commotion as everyone just wanted to express their voice in a peaceful manner. Falun Dafa is part of our lives, but something so good as Dafa is not allowed to be practiced. We felt we must clarify the truth to the government that Falun Dafa is beneficial to both China and the world’s society.”

Even though more than two decades have passed Ms. Pei still gets excited when she recalls that day, “The April 25 Peaceful Appeal is a great event. Thousands of people appealed so peacefully—there was no violence. This set a precedent for peaceful appeals in China. However, we did not expect that the CCP would be so evil and suppress such a peaceful and kind group.”