(Minghui.org) Falun Dafa practitioners gathered on a sunny and bright Saturday afternoon, April 23, 2022, to commemorate the 23rd anniversary of the April 25 Appeal in Beijing. During activities in Glasgow, practitioners from Scotland and northern England told people about Falun Dafa and how the CCP (Chinese Communist Party) has persecuted the spiritual practice for 23 years. They also demonstrated the exercises and collected signatures on a petition to end the persecution. 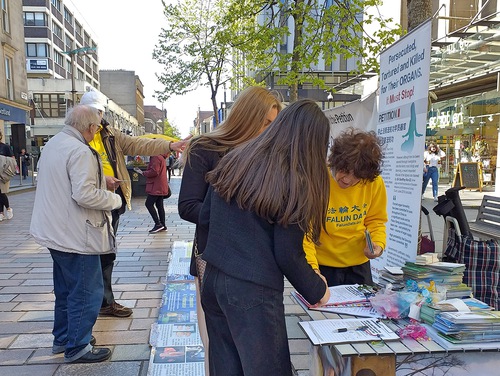 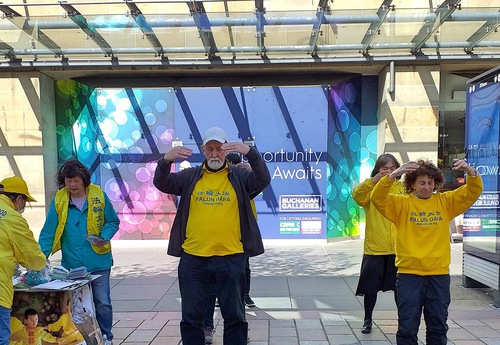 On April 25, 1999, over 10,000 Falun Dafa practitioners gathered at the State Council Appeals Office in Beijing and asked that the 45 practitioners from Tianjin who were arrested be released. They trusted the government would do the right thing. They did not shout any slogans or block the streets. Everyone stood quietly along the sidewalk until the practitioners were released.

Another practitioner, Ms. Li, said, “I heard about the peaceful appeal after it happened. Other practitioners and I thought that the persecution and misunderstandings about Falun Dafa would end right after the Tianjin practitioners were released. However, little did we know that the CCP would launch a nationwide suppression on Falun Dafa later on in July 1999.”

Practitioners set up two information booths on the bustling streets of Glasgow to raise awareness about Falun Dafa 23 years later. They wanted to tell people what Falun Dafa is and why the CCP is persecuting the practice in China.

The two colorful booths and peaceful exercise demonstration attracted peoples’ attention. Many passersby slowed down and read the informational posters and banners. Several signed the petition to end the persecution. 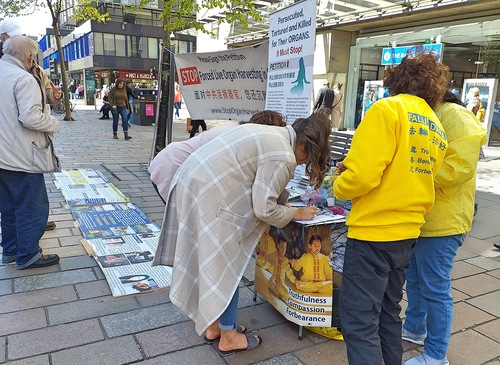 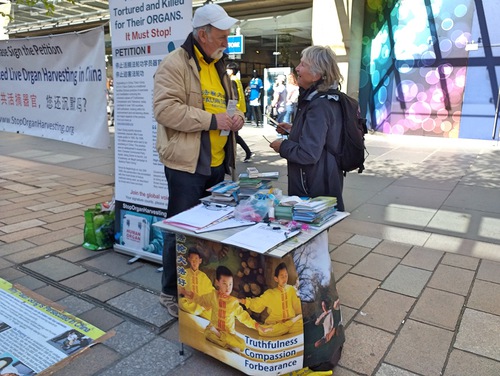 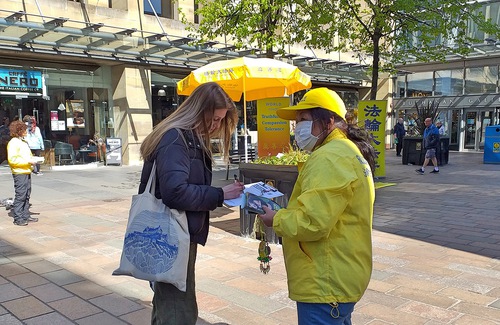 Passersby sign the petition after learning about Falun Dafa and how the CCP persecutes it in China.

Many passersby learned about Falun Dafa’s principles of Truthfulness-Compassion-Forbearance and were shocked to hear about the forced live organ harvesting. Some signed the petition and said they hope the persecution ends soon.

Shortly after practitioners set up the posters and banners, two students walked up to the information booth and signed the petition. Saun McCrong, one of the students, said, “Forced live organ harvesting is terrible. It is a very bad thing to do. We’ve read information about forced live organ harvesting on the Internet before. We need to sign the petition to protest.” 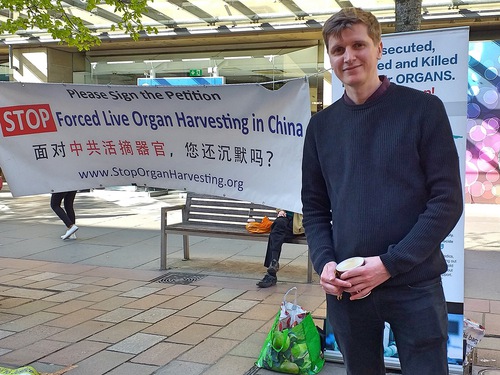 Gareth Orchard, a professor at the University of Edinburgh said, “Truthfulness-Compassion-Forbearance are wonderful principles.”

Gareth Orchard, a professor at the University of Edinburgh, stopped and read the informational posters attentively. He said he understood what Falun Dafa was, how it benefits one’s mind and health and why the CCP persecutes Falun Dafa practitioners. He signed on the petition.

Mr. Orchard said, “Truthfulness-Compassion-Forbearance are wonderful principles and it is sad seeing how the CCP persecutes it.”

A man who moved to England from Hong Kong two months ago asked a practitioner, “Are you Falun Dafa practitioners?” When the practitioner said, “Yes, we are.” The man gave him a thumbs up and said, “You are awesome. I had a friend who practiced Falun Dafa when I was in Hong Kong. Truthfulness-Compassion-Forbearance are very good principles.”

The man also commended the practitioners’ media outlets for telling the truth. He said he hopes Falun Dafa practitioners will persist no matter how hard it gets.

“I support you! Keep up the good work!”

Toscany McKernie accepted a truth-clarification flyer and said in fluent Chinese, “I agree and I will sign the petition. I know that the CCP is just as bad as Hitler and the Nazis. The CCP abuses its own people and especially targets Falun Dafa practitioners, Mongolians, Tibetans, Uyghurs and Christians. I support you! Keep up the good work!”