(Minghui.org) Local Falun Gong practitioners in Irkutsk, Russia held a quiet protest outside the Chinese consulate to commemorate the April 25 peaceful appeal. The protest was held on April 25, 2022. The practitioners told people about the evil nature of the Chinese Communist Party (CCP), and called for elected officials to stop the CCP’s persecution. 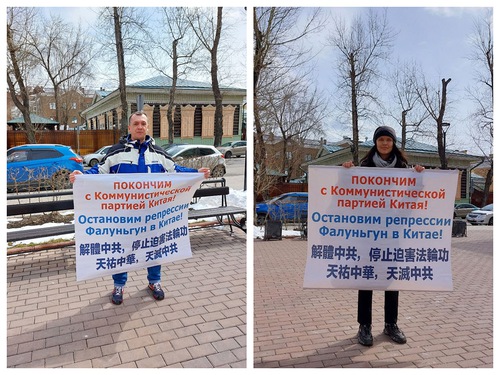 Practitioners protesting outside the Chinese Consulate in Irkutsk, Russia

An older man approached Yura, a Falun Gong practitioner who was protesting near the Chinese consulate, and told her that he had served in the army at the Chinese border in the 1960s. Thus, he’d seen first-hand the immoral and corrupt behavior of the CCP. The man told the police that it was a good thing for Falun Gong practitioners to protest the atrocities committed by the CCP. 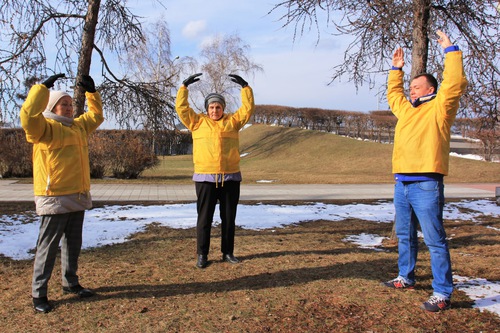 Practitioners do the Falun Gong exercises in Irkutsk. 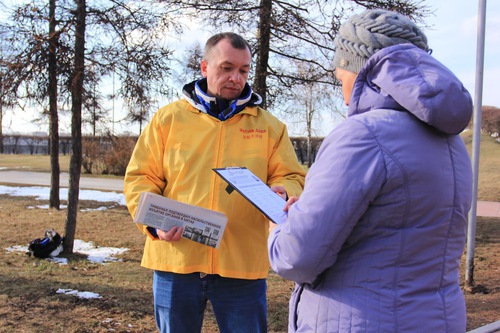 Falun Dafa (also known as Falun Gong) was first introduced to the public by Mr. Li Hongzhi in Changchun, China, in 1992. The spiritual discipline is now practiced in over 100 countries throughout the world. Millions of people who have embraced the teachings—which are based on the principles of Truthfulness, Compassion, Forbearance--and do the five gentle exercises have experienced improved health and well-being.

On April 23 and 24, 1999, police officials in Tianjin, a city near Beijing, assaulted and arrested dozens of practitioners who had gathered outside a magazine office to discuss errors in a recently-published article attacking Falun Gong. As word spread of the arrests and more practitioners inquired with officials, they were told they had to take their appeals to Beijing.

However, Jiang Zemin, former head of the CCP, perceived the spiritual discipline’s growing popularity as a threat to the CCP’s atheist ideology, and issued an order to ban Falun Gong on July 20, 1999.

The Minghui website has confirmed the deaths of thousands of practitioners due to the persecution over the years, but due to the difficulty in getting information out of China, the actual number is suspected to be much higher. Many more practitioners have been imprisoned and tortured for their faith.