(Minghui.org) Falun Dafa practitioners in many Canadian cities held rallies on April 25 and 26, 2022 to mark the 23rd anniversary of the April 25 peaceful appeal. They called on the Chinese Communist Party (CCP) to end the persecution of Falun Dafa and release 13 practitioners who are relatives of Canadian residents.

Li Xun, spokesperson for Falun Dafa practitioners in Ottawa, said that when 10,000 practitioners gathered in Beijing on April 25, 1999, they were peacefully calling for the government to uphold their constitutionally-protected right of freedom of belief. But even such a peaceful appeal was unacceptable to the communist regime, which ordered the most brutal persecution just three months later. Falun Dafa practitioners in China have since faced unprecedented numbers of arrests, incarceration and torture, as well as a systematic propaganda campaign designed to turn all of Chinese society against them. Despite the level of violence practitioners are facing, they still persistently raise awareness in a peaceful way, carrying on the spirit of the historic April 25th Appeal.

Falun Gong practitioner Zhang Su, from Vancouver, said that Canada was the first country to publicly condemn the CCP’s persecution of Falun Gong 23 years ago. But in recent years, she has heard fewer such voices. She urged the Canadian government to continue to press the CCP to stop the persecution, as they did in rescuing Michael Kovrig and Michael Spavor, two Canadians previously held hostage in China.

Prior to the recent events, MP Judy Sgro, Joint Chair of Parliamentary Friends of Falun Gong, wrote to the practitioners to commemorate the April 25 Appeal.

“On April 25, 1999, 10,000 Chinese Falun Gong practitioners peacefully assembled in Beijing to call on China’s leadership to uphold their constitutional rights to freely practice their faith without harassment and intimidation and without state control by the Chinese Communist Party,” MP Sgro stated in her letter to the Canadian Falun Dafa Association on April 22.

“As co-chair of the Falun Gong Parliamentary Friendship Group, I stand in solidarity with Canadian Falun Gong practitioners on the anniversary of their fellow practitioners’ April 25 appeal for their freedom of belief in China.”

MP Sgro wrote that Falun Gong practitioners have continued their peaceful efforts to raise awareness of the CCP’s persecution of innocent Chinese people, year after year. She called on the Canadian government to urge the CCP to end the persecution and to immediately release Canadian citizen Sun Qian, who was illegally sentenced to 8 years in prison in June 2020 for her belief. She also called for the immediate release of Jack Liu’s father, who was arrested and detained by the Chinese police late last year.

Dennis Watson, a Canadian citizen, joined the Falun Gong practitioners’ protest in front of the Chinese Communist Consulate in Vancouver on the afternoon of April 24. He has long been concerned about human rights in China, and regrets that today’s China has become an economically powerful but morally degraded country, a consequence of the ruling regime’s destruction of the Truthfulness-Compassion-Forbearance advocated by Falun Gong.

“The Chinese government had the opportunity to embrace the people and make the country a better place 23 years ago. Unfortunately, they did the opposite and committed mass genocide against the people,” he said. 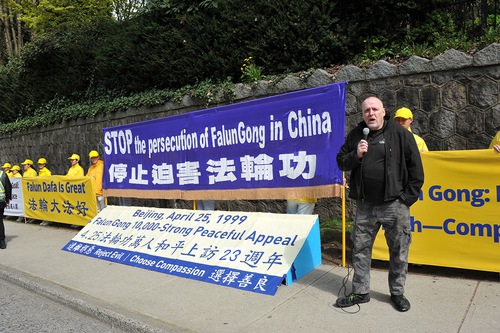 Dennis Watson spoke at the rally in front of the Chinese Communist Consulate in Vancouver on April 24, 2022